Relative to other affluent countries, the United States devotes disproportionate resources to health care with disappointing results. Complex insurance rules and distorted market signals create massive inefficiencies, frustrated patients, and providers burdened by excessive paperwork. Recognizing these problems, entrepreneurs are increasingly applying information technology to health care equipment, monitoring, treatment, and service delivery, creating a sector known as digital health. These technologies, once embedded and distributed around the country, hold the potential to substantially alter the efficiency and quality of health care through the better generation, processing, and use of information; the reduction of overhead costs; and the empowerment of patients.

Demand for health care is growing. The Census Bureau projects that the share of America’s population accounted for by people aged 65 or over will expand rapidly, from 13 percent in 2010 to more than 20 percent by 2025.1 Meanwhile, the Affordable Care Act will bring millions into the health care system.2

This expansion is putting pressure on government budgets and creating workforce challenges. The Congressional Budget Office estimates that federal outlays for major health programs will account for one-third of the growth in total federal outlays during the next decade—the largest of any major category.3 To accommodate this growth, the Labor Department projects that demand for health care workers will grow at more than double the rate of the rest of the economy.4

Yet, the U.S. health care system is profoundly inefficient. At 16.9 percent of GDP, the United States has the highest total health care expenditures in the developed world—compared with 9.3 percent for the Organization of Economic Co-operation and Development (OECD) as a whole, and 11.8 percent for Netherlands, the second highest spending country.5 Despite this, health outcomes are often among the worst—the United States ranked 26th out of 40 nations in life expectancy at birth, 32nd out of 37th in adult diabetes, and 22nd out of 33 for ischemic heart disease mortality, 35th out of 40th in childhood obesity and last in adult obesity rates (twice the OECD average).6

These poor health outcomes drive up costs. One academic study estimates that obesity-related illness accounts for 21 percent of total health care spending, or about 150 percent more per person than for individuals who are not obese.7

The health care sector also imposes extremely high overhead costs on consumers. A study by consulting firm PwC found that half of all health care spending is “wasteful”—which includes behavioral, clinical, and operational factors for driving up costs.8 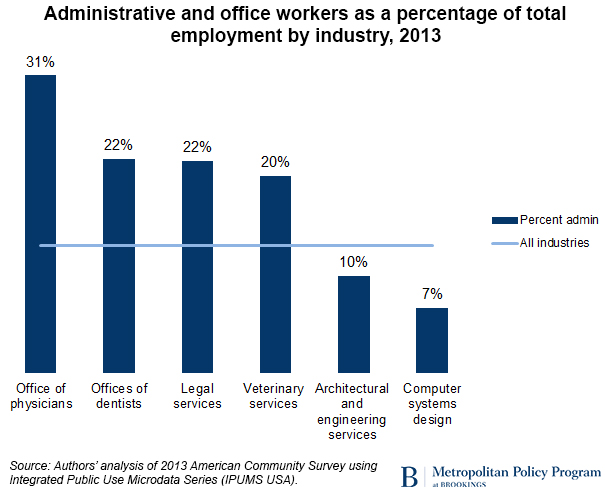 Technology can play a role

As emerging technologies converge to create the optimal conditions for digital-enabled innovation—speed and ubiquity of connectivity; fast, cheap, and more powerful computing; expansion of data collection and analytical capabilities—many sectors are taking advantage. So should health care.

Technological innovation can play a role, in two critical ways:

In fact, as Eric Topol (a noted physician, medical researcher, and commentator) has recently written, a small number of companies have already made significant progress along these dimensions, and a more efficient, accessible, and consumer-centered model of health care may not be far off.10

A new analysis of the digital health sector

Here, we offer a partial overview of the emerging digital health sector by analyzing the universe of venture capital deals and venture-backed companies in the United States between 2009 and 2014—a period when growth in the sector accelerated.

Here’s what we found:

1. Digital health funding has expanded rapidly overall and as a share of all venture capital

Though relatively nascent in 2009, annual digital health venture capital deals were two-and-one-half times larger in 2014 and dollars invested nearly six times greater than five years earlier—growing faster than VC as a whole. In total, $15.4 billion was invested on the back of 2,349 venture deals during the six-year period. 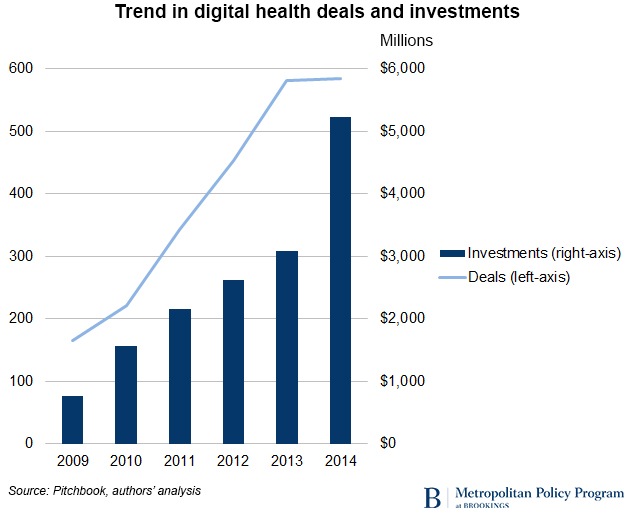 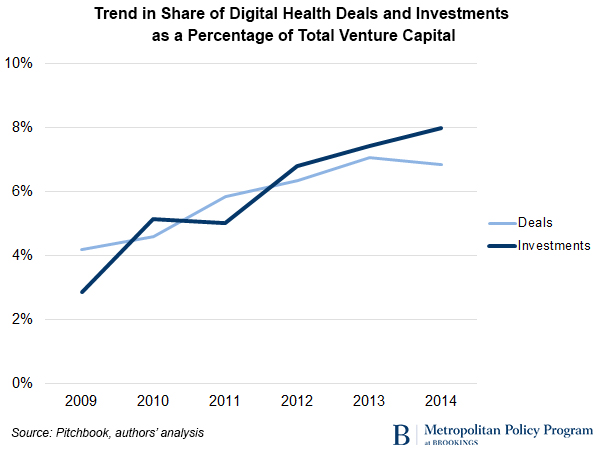 Ultimately, the goal of venture investment is to see a return—often through acquisition or IPO. Though still relatively few in number, digital health companies have seen rapid growth in exit activity in 2013 and 2014—outpacing strong activity in the ecosystem as a whole. 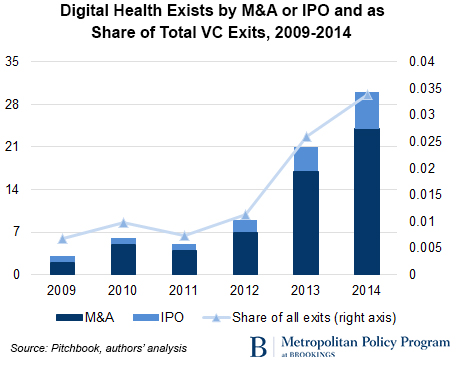 From 2009 to 2014, the San Francisco area took in 25 percent of total VC funding and 23 percent of digital health funding—ranking first for both. But the five largest metro areas for digital health comprised just over half of all funding (54 percent), compared with 64 percent for total VC deals.

To be sure, the major VC hubs like California, Boston, and New York also generate the most digital health venture capital per worker. However, relatively high rates of digital health investment are also spread throughout the Rocky Mountain, Sun Belt, Midwest, and Southeast regions. 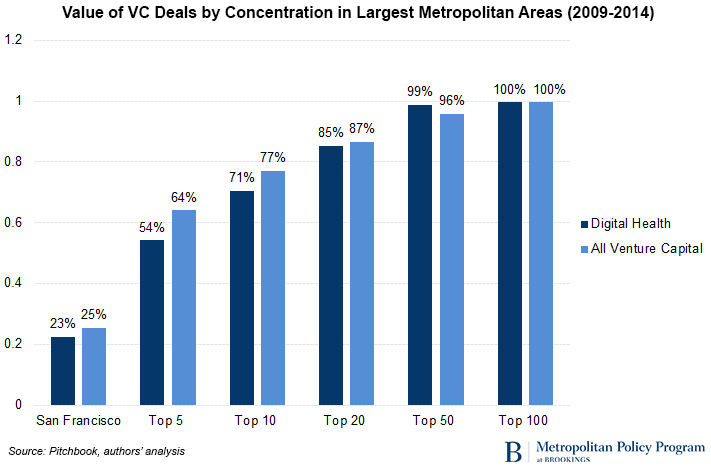 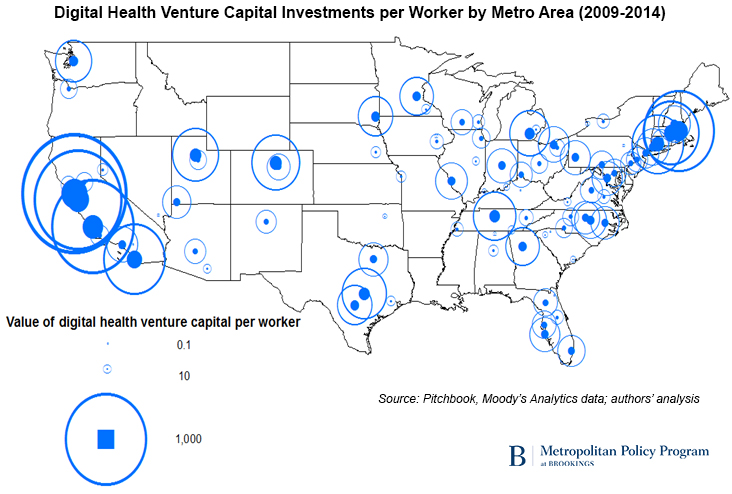 5. On a per metro basis for VC investment, some surprising places emerge as strong digital health markets 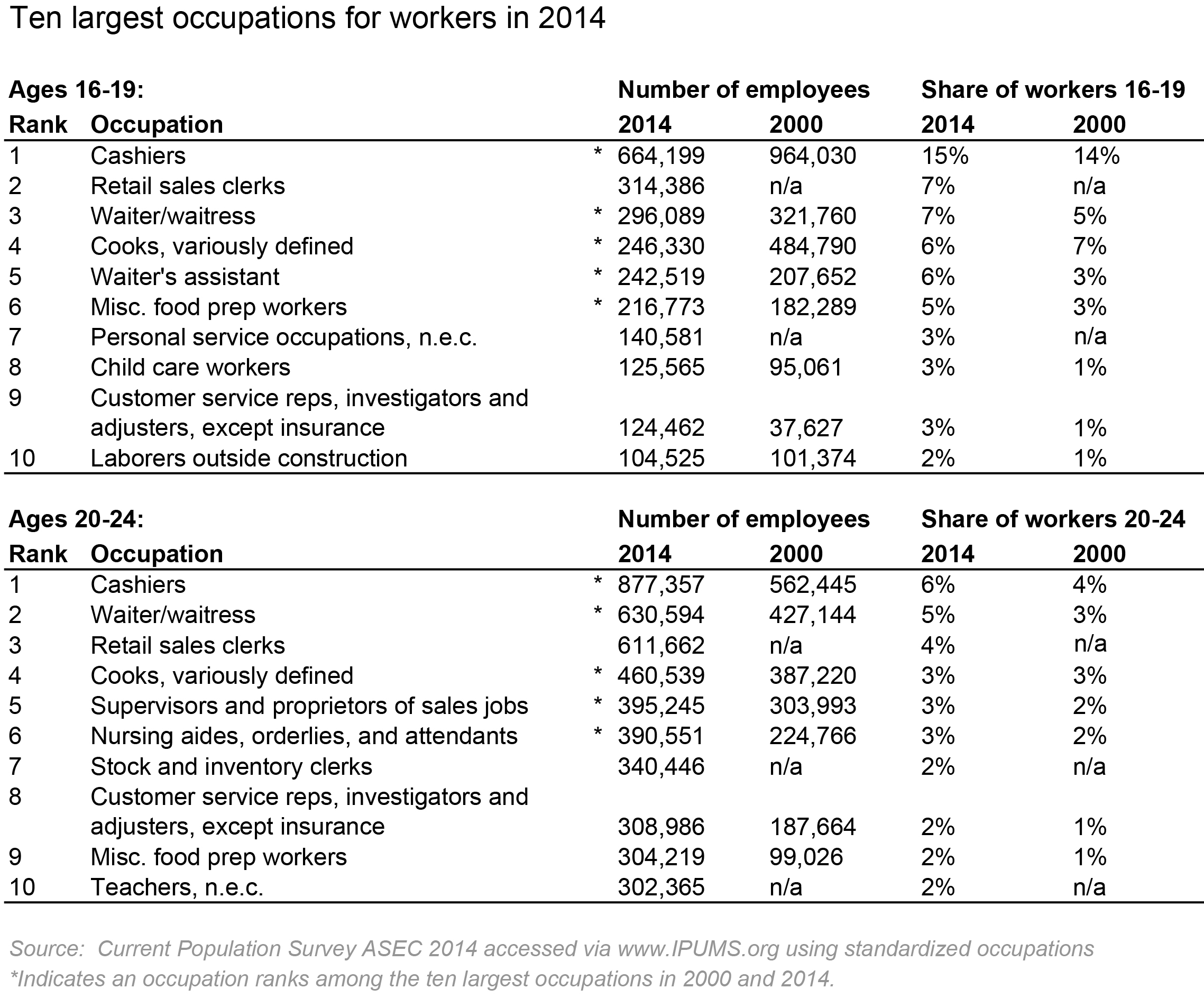 One might think that digital health entrepreneurship would be more likely to come from places with major hospitals, medical schools, or other health care providers. That does not appear to be the case. There is almost no correlation between the percentage of workers in the health care sector and the amount of venture capital per worker invested in digital health. By contrast, metro areas with strong advanced service industries—like computer systems design, engineering services, and research and development services—are very likely to have high rates of digital health VC investment. 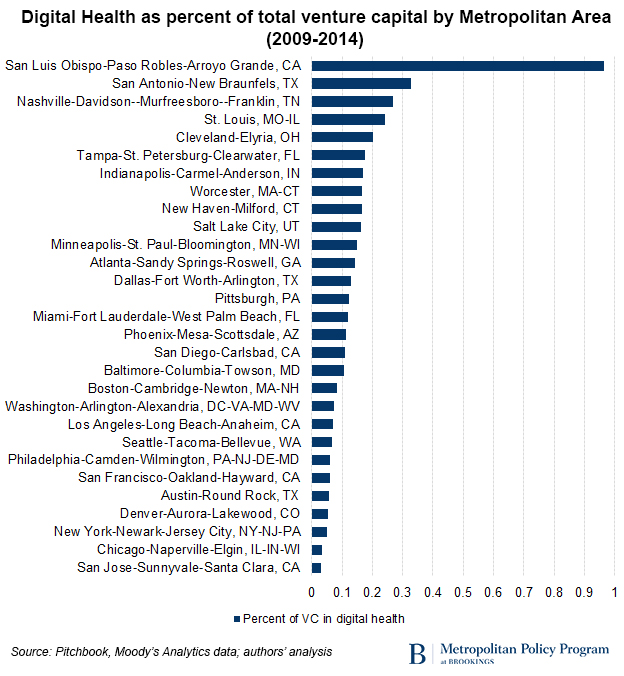 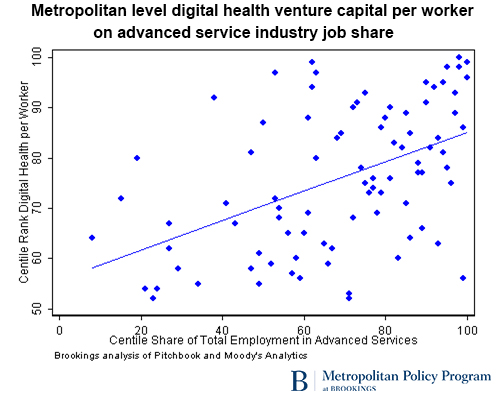 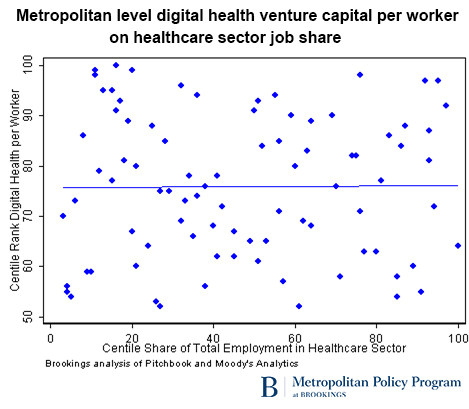 The need for health care presents the United States, in particular, and all aging countries more broadly, with a massive economic challenge: how to preserve and improve health without devoting excessive resources to the health care sector.

Technology is already providing an important role that will increase as a means to confront these challenges. Venture capital activity in digital health has increased substantially in recent years and is absorbing a larger share of total deals and dollars invested in the United States. Digital health companies are no longer in their infancy but at already generating significant returns to both specialist investors and broader venture capital firms—signaling a sector that is moving from proof-of-concept to higher rates of expansion and implementation. Exit activity—public offerings and mergers and acquisitions—has also grown significantly in recent years.

The digital health ecosystem is dispersed geographically throughout the United States, with deal and investment concentrations less concentrated in the major VC hubs than total venture capital. At a share of the workforce, some surprising areas emerge as important contributors to VC entrepreneurship.

Only time will tell if digital health companies will fulfill their promise of increasing the quality and efficiency of health care, but there are promising signs that they will at least make a significant contribution.

10. Eric Topol, The Patients Will See you Now: The Future of Medicine Is in Your Hands (Basic Books, 2015).

11. These four lists were merged together and then into the Pitchbook database, where the identity of each company was confirmed—either automatically or in many cases, manually. This was necessary because the names of early-stage companies frequently change, as does the ownership structure—businesses are regularly acquired or merged. This list was then reduced to include only companies headquartered in the United States, and those that received some venture funding between 2009 and 2014—either from venture capital firms, corporate venture investors, or other professional venture investors, such as angels or accelerators. Our analysis culminated in a list of 1,022 digital health startups.