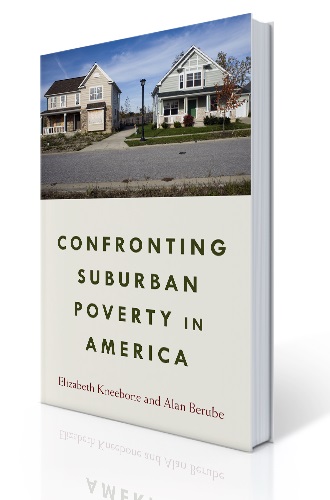 Poverty in the United States looks different now than it did when President Lyndon Johnson declared an “unconditional war on poverty” 50 years ago. With the publication of their book, Confronting Suburban Poverty in America, Elizabeth Kneebone and Alan Berube brought to the fore of the national conversation the experience of the 16.5 million people living in poverty in the suburbs. In a new podcast, Kneebone, a fellow in the Metropolitan Policy Program, says that the landscape of poverty is “dramatically different” than it was a half century ago. A third of the poor population lives in the suburbs, and during the 2000s, the poor population there grew larger and faster than in cities.


While many programs from the war on poverty have been effective in keeping millions of people out of poverty, Kneebone says in this podcast that the shifting geography of poverty to suburbs means that we need to “reassess what’s working” and “better adapt our policies to a new reality of suburban poverty.”

Learn more about the book, get case studies about communities facing suburban poverty, and download an Action Toolkit at Confronting Suburban Poverty in America.

Also read “Does the Suburbanization of Poverty Mean the War on Poverty Failed?” by Elizabeth Kneebone and Alan Berube.