This week’s Senate floor votes on the powers of the Federal Reserve caught my attention. Despite Congress’s bipartisan lashing of the Fed for its performance before and after the financial crisis of 2008, the Fed this week defeated two challenges to its autonomy as a central bank. Granted, Congress’s pummeling of the Fed has taken a toll on the Fed’s reputation, as has the Fed’s forays into credit policy to combat financial collapse and recession.

First, the Senate adopted a bipartisan amendment, 90-9, to allow the Fed regional district banks to keep their supervisory powers over small banks. Without “sup and reg,” the banks would be nothing more than regional economic think tanks. The Fed retained its supervisory powers, not least on account of intense lobbying by Bernanke and several of the regional Fed bank presidents.

Second, the Ron Paul-inspired Audit-the-Fed movement came to an abrupt end this week when the Senate defeated (by a vote of 37-62) Senator Vitter’s amendment for a full GAO audit of the Fed, including its decision-making over monetary policy. Instead of endorsing a full body search of the FOMC, the Senate adopted a modified Sanders amendment to require only a one-time audit of the Fed’s emergency lending activities. Given that Bernanke had already committed earlier this year to an audit of four of the Fed’s lending facilities, adoption of the Sanders amendment was probably less consequential than portrayed.

What happened to the Audit-the-Fed movement? Support for the full audit was concentrated among conservative (e.g. Republican) senators and among senators facing the electorate this fall. To be sure, more GOP running for re-election voted for the Vitter amendment than did Democrats running for re-election. But the electoral and ideological currents to the vote were pronounced, as seen in this figure showing the likelihood of voting for the Vitter amendment: 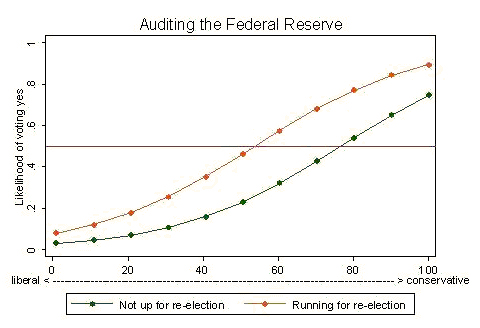 Except for die-hard Fed opponents and senators eager to show voters their populist stripes, the Senate’s fire to punish the Fed seems to have gone out. Likely, Sanders knew a full audit would fail, read the writing on the wall, and went for a limited win over certain defeat. To be sure, the Senate bill takes other wacks at the Fed’s power, including reining in its emergency lending authority. Still, when reform is eventually agreed to, the Fed’s power will likely be enhanced in areas of systemic risk, firm dissolution, and consumer protection. The central bank may be a convenient whipping post. But when the Fed warns that congressional meddling could cause irreparable harm to the economy, Congress seems to have little appetite for tampering with the Fed.