Late last month, Gallup released fresh state-by-state numbers on the electorate’s ideological and partisan identification. These numbers provide both an X-ray of the structure of political competition and a roadmap for November.

To grasp the underlying story, I divided each list into a top and bottom 15 and a middle 20—from most to least conservative and from most to least Republican—and then arrayed them in a three by three grid. Here are the results: 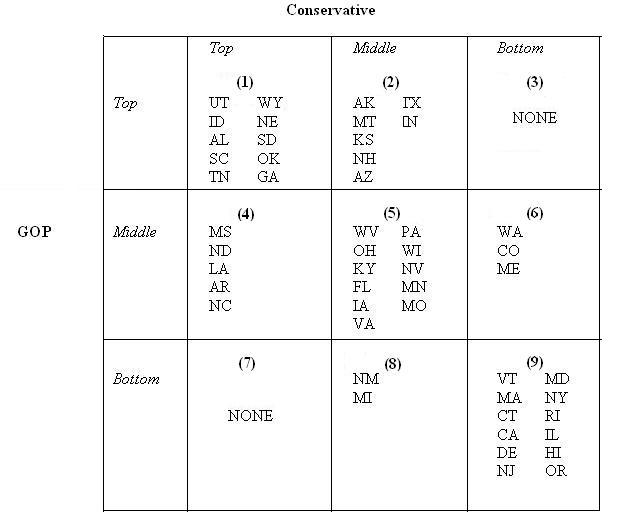 The first (not exactly surprising) fact that stands out is that the ideological sorting-out of the two major political parties is far advanced. Not only are the top right (3) and bottom left (7) boxes empty; nearly half the states fall into either the top left (1) or bottom right (9). McCain carried every state in the former, Obama everything in the latter. Indeed, Obama carried all the states in the most liberal/Democratic boxes (6, 8, 9) while McCain carried all but three in the most conservative/Republican states. (In at least two of the three—North Carolina and Indiana—Obama seems unlikely to hold this beachhead in enemy territory next time.) Moreover, the states in Box 1 have a total of 18 Republican senators and only two Democrats (Ben Nelson and Tim Johnson), while the states in Box 9 counter with 21 Democrats, one Republican (Scott Brown) and two independents (Joe Lieberman and Bernie Sanders, both of whom caucus with the Democrats).

That leaves the most interesting and competitive Box 5, which currently features 15 Democrats and 7 Republicans. It is no accident that five of the nine most closely contested senatorial races—Pennsylvania, Ohio, Wisconsin, Nevada, and Florida—fall in this box. Nor are the hot races in moderately Republican but non-conservative Colorado and Washington, where winners often prevail by narrow margins, terribly surprising.

But the races in California and Illinois—charter members of Box 9—verge on astonishing. The last Republican to hold Barbara Boxer’s seat left office in 1969. Granted, Boxer is an unloved incumbent, while Illinois Democrats managed to select a 34-year old former treasurer of a failed bank as their candidate to fill an open seat against a mostly (if far from entirely) credible Republican. However these races turn out, the fact that their outcome is in doubt speaks volumes about Democrats’ vulnerability this year.