The typical man with a full-time job–the one at the statistical middle of the middle–earned $50,383 last year, the Census Bureau reported this week.

You read that right: The median male worker who was employed year-round and full time earned less in 2014 than a similarly situated worker earned four decades ago. And those are the ones who had jobs.

This one fact, tucked in Table A-4 of the Census Bureau’s annual report on income, is both a symptom of an economy that isn’t delivering for many ordinary Americans and at least one reason for the dissatisfaction, anger, and distrust that voters are displaying in the 2016 presidential campaign.

But back to men. Why are wages for the typical male worker stagnating? After all, the U.S. economy has grown substantially since 1973. Output per person in the U.S. has nearly doubled since 1973, according to the Bureau of Economic Analysis. And output per hour of work (minus depreciation) has increased nearly 2.5 times, according to a recent analysis by the Economic Policy Institute, a left-leaning think tank that produces reliable statistical analyses. 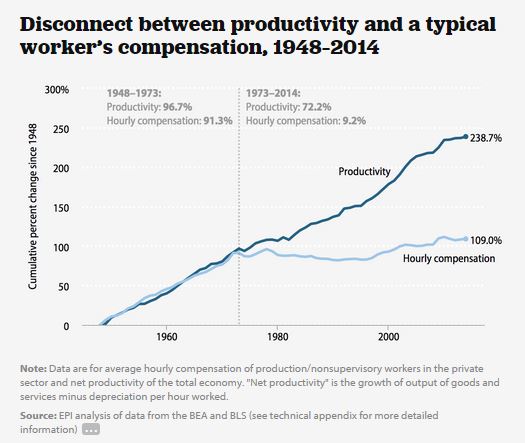 As I often do when confronted with puzzles like this, I contacted Larry Katz, the Harvard University labor economist.

He identified three factors to explain the stagnation of men’s wages:

1. Although this is not the major factor, workers have been getting more of their compensation in benefits as opposed to the cash wages that the Census tallies. (The EPI chart takes that into account and tracks total compensation.)

2. Labor’s share of national income has been declining since 2000 and capital’s share has been rising. Labor’s compensation (wages and benefits) has not been keeping pace with productivity growth. In their new analysis of this phenomenon, EPI’s Josh Bivens and Larry Mishel argue, “ This decoupling coincided with the passage of many policies that explicitly aimed to erode the bargaining power of low- and moderate-wage workers in the labor market.”

3. The “most important factor,” Mr. Katz says, is the rise in wage inequality, the gap between the earnings of the best-paid workers and the ones at the middle and the bottom that has been widening steadily since about 1980. Economists differ over how much of this is the result of globalization, technological change, changing social mores, and government policies, but there is no longer much dispute about the fact that inequality is increasing.

It’s easy for Republicans to blame wage stagnation on Democrats and vice-versa. It’s not hard to understand why so many voters (who don’t need Census Bureau tables to understand what’s happening to their paychecks) are drawn to candidates who acknowledge this reality, lambast incumbents for not doing more to address it, and style themselves as outsiders with fresh approaches to one of the nation’s most alarming economic problems.