President Barack Obama took the very symbolic gesture of delivering his much anticipated speech on fiscal reform and deficit reduction from a podium at George Washington University, an institution of higher learning, including schools of medicine, public health and nursing. By doing so, he signaled the desire to infuse a sense of responsibility in the next generations- those who will ultimately inherit our fiscal woes if we continue on our current path. The auditorium was packed with students who probably have not yet contributed significantly to Medicare or social security much less had any experience with entitlement programs, but the President appealed to their sense of patriotism and national identity by recalling the great ability of Americans to come together around a set of problems, find common ground and once again be the envy of the world’s eye. The message was simple: if we don’t make some tough decisions now we will pay for it dearly in the future. And the future isn’t that far away.

Scenario 1: Current Law (assumes laws that are supposed to expire will be allowed to and that we will cut physician payments according to Sustainable Growth Rate)

Scenario 2: Based primarily on following possibilities: 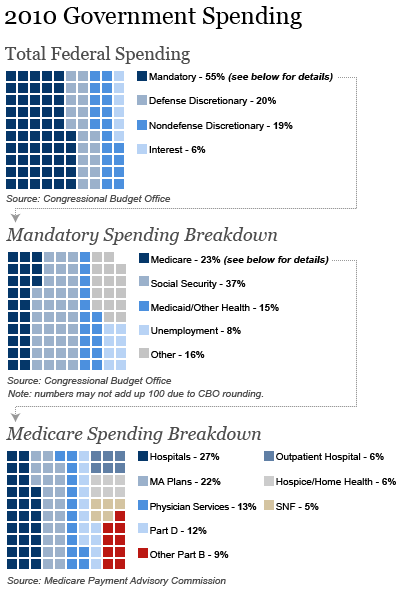 President Obama stated that the Affordable Care Act will reduce the deficit by a trillion over the next ten years. The Congressional Budget Office (CBO) estimates a reduction of $210 billion but does state that there could be more savings depending on appropriations. President Obama proposes building on these savings with additional Medicare and Medicaid savings of $480 billion over the next 12 years. He does so by employing the following levers of action for health spending reduction:

Opportunities to Build On the President’s Vision

The President acknowledged that there won’t be agreement on everything he proposed and he welcomes new ideas. Here are a few for consideration:

The Independent Payment Advisory Board

Some of the ideas, especially around improving the IPAB have been reflected in other bipartisan consensus efforts, such as Bending the Cost Curve II in which Mark McClellan and others advocated for an IPAB which is not seen as the punitive body of last resort but rather a catalyst of real delivery system change. In their report they describe some improvements to the current IPAB which would be worth heeding including:

Additionally, in order to be fair and equitable, IPAB should be able to make recommendations on hospitals- this point specifically was highlighted by the Presidential Deficit Reduction Commission.

The President alluded to the desire to move away from some of our current perverse financial incentives:

“We will change the way we pay for health care – not by procedure or the number of days spent in a hospital, but with new incentives for doctors and hospitals to prevent injuries and improve results. “

But there is room to improve; allow for health care professionals to have some flexibility within Medicare and Medicaid to demonstrate their ability to bend the cost curve through innovation in payments. By building on some of what was included in the Affordable Care Act around pay for performance, etc, the Administration should consider allowing for health care professionals to come forward (much like they are encouraging ideas from Governors) with payment models that will incentivize every clinician’s innate desire to be their best. Encouraging the Center for Medicare and Medicaid Innovation to partner with professional organizations, for example, to leverage their clinical registries and promote episodic/bundled payments around certain high volume procedures/conditions will in turn lead to clinical peer review and adjudication that is centered in the notion of professionalism and patient-centered care. Cardiologists working with primary care physicians to prevent patients form suffering an acute myocardial infarction will move from fiction to reality when we remove the perverse financial incentives that prohibit team-based care and clinical collaboration.

While these payment reforms are piloted, Medicare could alter benefits over time (without reducing actuarial value) based on evidence of better quality and lower costs. For example, beneficiaries who participate in high-value ACOs or beneficiaries with serious illnesses who choose providers that offer a bundle of services (surgery, chronic disease management) at a lower cost should share in the savings. This model could satisfy a bipartisan effort towards truly patient-centered care in which consumers have better options and clinicians deliver their best care.

There is plenty more out there and surely in the days, weeks and months to follow, more ideas will flow. Hopefully there will be some lessons learned from some of the other members of the Federal health care family such as the Department of Defense (Tricare) and the Department of Veterans Affairs where we have a great deal of knowledge around quality of care, electronic health record implementation, changing provider behavior through nonfinancial incentives.

Beginning in May, Vice President Biden will start meeting what will inevitably be characterized as the Gang of 16 or the Sweet Sixteen or some other moniker- Four members of Congress selected by Senators Reid, McConnell and Speaker Boehner and Minority Leader Pelosi. It will be up to this group to help give some legs to the President’s proposal and I am certain health care will be a popular topic of discussion for the newly minted task force; certainly an opportunity for inspiration, innovation and ingenuity.