Recent changes in American policy to make work pay have affected the labor market status of several million former, current, and potential recipients of government transfers. U.S. social policy has been reformed to expand tax credits for the working poor. At the same time, state and federal lawmakers have reduced the cash welfare available to the nonworking poor. In 1996 the federal government abolished the main social assistance program for indigent adults with children. Congress abolished the old program—Aid to Families with Dependent Children (or AFDC)—and replaced it with Temporary Assistance to Needy Families (TANF). The new federal program placed pressure on all states to adopt aggressive policies to curtail assistance benefits to poor parents who are capable of working. The head of each family on social assistance is now required to work within two years after assistance payments begin. Work-hour requirements are stringent, and states face increasingly harsh federal penalties if they fail to meet them. The new federal law stipulates that the great majority of families can receive benefits for no longer than five years, it and allows states to impose even shorter lifetime limits on benefits. Many states have taken advantage of this flexibility, and they have limited benefits to an even shorter period than the maximum permitted under federal law.

Most states now require adult aid recipients who are not disabled to actively seek work or face reductions in their monthly aid payments. States also provide improved job search services to help recipients find work. As noted, almost all states now impose time limits on recipients’ eligibility for cash assistance benefits. More rarely, recipients are offered training to increase their employability. Many states have also liberalized their earnings disregards, allowing recipients to keep more of their monthly benefits when they begin to work and earn wages.

The new welfare law helped produce an unprecedented drop in the nation’s social assistance rolls. Since reaching a peak in 1994, the number of families collecting cash public assistance for children has dropped more than 3 million or over 50%. No drop of this magnitude had occurred in the previous 40 years. The sharp decline in the assistance rolls from their peak in 1994 is at least partly due to state-level reforms that began even before Congress passed the federal reform law in August 1996. The decline is also due to marked improvements in the demand for low-skill workers, especially between 1995 and 2000, and changes in the Earned Income Tax Credit (EITC). The liberalization of the EITC greatly increased the amount of earnings supplementation available to low-wage workers. A better economy, the increased generosity of the EITC, and much tougher federal and state work requirements have contributed not only to a decline in the U.S. welfare rolls but also to a large jump in labor force participation and employment among lone parents, especially single mothers. 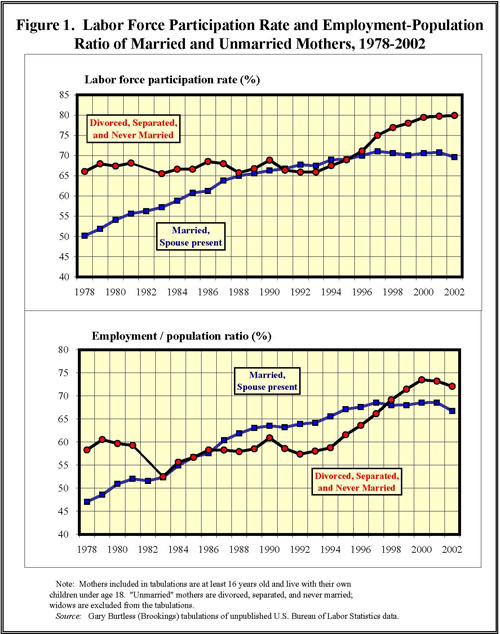 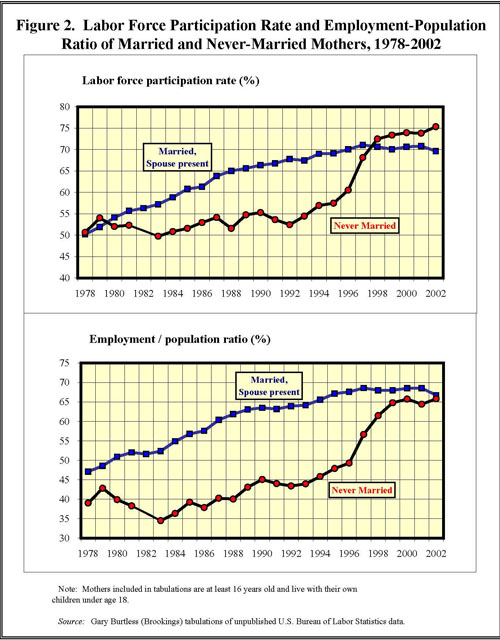