Of all the failures of recent Congresses and Presidents, none is more important than their failure to deal with the nation’s long-term debt. Although Congress tied itself in knots trying to address the problem, the growth of debt remains, in the words of the Congressional Budget Office, “unsustainable.”

Debt figures tell part of the story. When the Great Recession hit, the federal debt was equal to about 40 percent of GDP. But to fight the recession, Congress enacted an $800 billion dollar stimulus bill. Stimulus spending, combined with already enacted spending and tax policy, resulted in four years of trillion dollar deficits. As a result, the debt ballooned to 78 percent of GDP in 2013, almost twice the pre-recession level. The annual deficit is now declining at a stately pace, but by 2016 it will begin increasing again, and by 2020 under CBO’s alternative fiscal scenario, we will once again return to annual deficits above a trillion dollars, thereby once again greatly increasing the national debt. 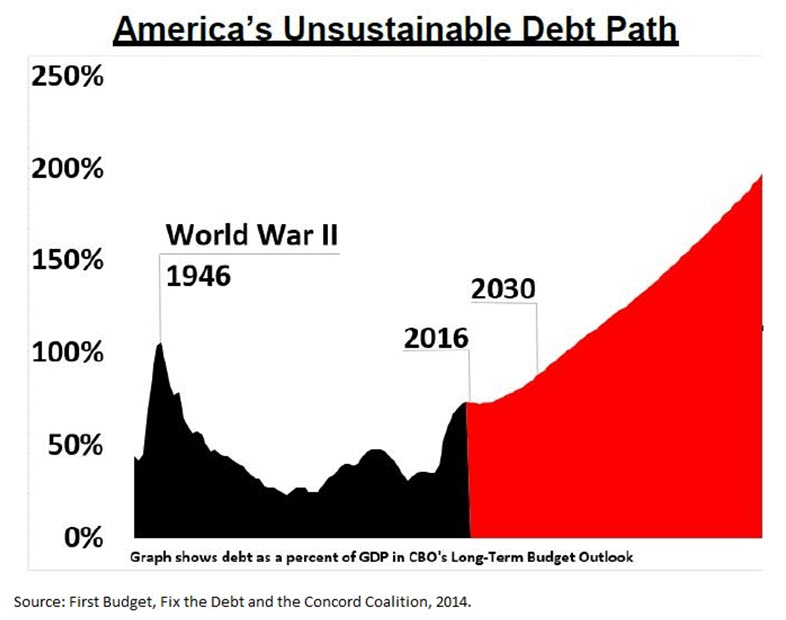 The accumulation of debt should prevent federal policymakers from feeling any sense of accomplishment. In fact, CBO estimates that the debt will be well over 100 percent of GDP by 2039 under conservative assumptions about spending and revenue. When CBO incorporates its estimates of the impact of the continuing large federal deficits on the nation’s economy, it estimates that the accumulated debt held by the public will reach an astounding 180 percent of GDP by 2039. One wonders if members of Congress or the President read these CBO reports.

What’s the word for our fiscal situation? Stunning? Shocking? Desperate? In recent testimony before the Senate Budget Committee, Boston University Economics Professor Laurence Kotlikoff, in effect, told the Committee that all of these terms are pathetically inadequate to describe our true fiscal situation. In compelling testimony, Kotlikoff argues that the federal fiscal situation is much worse than the CBO estimates let on. The reason is that CBO’s debt estimates do not take into account the full financial obligations the government is committed to honor, especially for future payments of Social Security, Medicare, and interest on the debt. He asserts that the federal government should help the public understand the nation’s true fiscal situation by using what economists call “the infinite-horizon fiscal gap,” defined as the value of all projected future expenditures minus the value of all projected future receipts using a reasonable discount rate.

What difference does the fiscal gap approach make in our understanding of the true federal debt? CBO tells us that the national debt was a little less than $13 trillion in 2014. But the fiscal gap in that year as calculated by Kotlikoff was $210 trillion, more than 16 times larger than the debt estimated by CBO and already judged, by CBO and many others, to be unsustainable. If a $13 billion gap is unsustainable, what term should we apply to a $210 trillion gap? Kotlikoff also calculates that the fiscal gap is equal to about 58 percent of the combined value of all future revenue. Thus, we would need to reduce spending or increase taxes by enough to fill that 58 percent gap if we wanted to put the federal budget on a path to solvency that balances the interests of those now receiving benefits and those who hope to receive benefits in the future.

Kotlikoff goes on to illustrate that the fiscal gap is increasing at an alarming rate and that delay makes our problem much worse. In 2003, just a little more than a decade ago, the fiscal gap was $60 trillion. But by last year it had catapulted to $210 trillion. The fiscal gap may not continue increasing as rapidly as it has over the past decade, but with each passing year – as Congress and the President do their best to avoid action – our hole grows deeper by substantial amounts.

Under the CBO estimates used by Congress, we have a huge debt hole. Under the more comprehensive fiscal gap measurement, we have a chasm. But little if any Congressional action is planned to deal with the notorious level of debt. We’re headed toward a fiscal black hole.