This article originally appeared in the Guardian on May 1, 2019, as part of the Guardian series on Broken Capitalism.

The economy is getting bigger, but not better. Not for most Americans, anyway. In the United States, additional income from productivity and growth has been going mostly to those at the top of the income and wealth ladder. Between 1979 and 2016, the US national income grew by nearly 60%, but after accounting for taxes and transfers, the bottom half of the income distribution experienced incomes rising by 22%, while those in the top 10% had income gains that were almost five times as much – 100%.

As income inequality widens, it’s calcified into some at the top accumulating larger and larger stocks of assets – money, but also property, stocks, bonds and other kinds of capital. In the United States, the distribution of wealth is even more severely unequal than income. Since 1979, wealth gains at the top have grown even faster than income; those in the top 1% now control about 40% of all wealth in the US economy, and the top 0.1% control more than 20% – three times as much as the late 1970s.

To put this into raw numbers, there are 160,000 families in the United States who hold more than $20m in 2012, the most recent year for which data is available, and their average wealth was $72m. This group’s share of wealth was almost equal to that of the bottom 90% of Americans.

What’s more, this massive wealth gap is almost certainly much larger than the data shows. The UC Berkeley economist Gabriel Zucman has extensively researched the use of tax havens by corporations and the ultra-rich to shield their profits and wealth from taxation. He estimates that $8.7tn in wealth, or 11.5% of world gross domestic product, is held in offshore accounts. Of the total value of offshore wealth, he estimates that 80% is owned by the top one-tenth of a percent.

These trends are invisible when we look at the most basic metrics we use to measure economic success. One of those measures – indeed perhaps the most important is gross domestic product, which is the sum total of all the goods and services produced within a nation’s borders. While not built to measure wellbeing – it’s an aggregate measure of income, not people’s welfare – it’s policymakers’ shorthand for the state of the nation’s economy. Even as who gains from growth has become increasingly unequal, looking at GDP, we see that since 1979, the US economy has grown at a steady rate of about 1.2% a year, leading too many to think there’s nothing wrong.

So: what is to be done? There is a plethora of policy ideas out there, from higher tax credits to jobs programs to tax reform. Many of them are good. But restoring a capitalism that works for workers means we have to dig deeper. First, we must recast how we even judge what economic progress looks like, and change our metrics accordingly; and second, we must rewire power relations in the labor market itself.

Capitalism is failing. People want a job with a decent wage – why is that so hard?

Workers of the world, embrace your value chains

Aggregate economic growth is telling us less and less about the real story of our lives. The architecture of economic measurement that we use to measure economic progress was developed almost a century ago by a group of economists. John Maynard Keynes in the UK and Simon Kuznets in the United States can perhaps claim to be the main parents of what has become our headline measure of economic success – gross domestic product, the total of a nation’s output of goods and services: GDP. This is one the most important metrics that policymakers use to compare economies across time and place.

And up until the 1980s, GDP was a useful indicator of broad income gains across the United States and up and down the income spectrum. When GDP rose by 2%, the vast majority of Americans saw their incomes rise by about 2%. Indeed, in the decades before the 1980s, those at the top of the income spectrum tended to see their incomes grow by less than the average and those at the bottom by more, resulting in economic growth that pulled the nation together.

Since then, the United States has been pulling apart. So aggregate GDP is no longer as useful a metric as it once was. Take 2014. While aggregate national income grew by 2.3%, after taxes and government transfer programs such as supplemental nutrition assistance, incomes for those in the bottom 90% grew by less than the average – 1.5% – while those in the top 1% saw their income grow by twice the average – about 5%.

This is a big problem. But there is a fix. Economists have figured out how to disaggregate growth by connecting numbers from national income and product accounts to data from surveys and administrative sources. There are countries, such as Australia and the Netherlands, that have implemented these methods to regularly produce reports showing how national income is distributed across the breadth of their citizenry. Not only by income but also by race, gender and age.

The good news is that legislation has been passed that encourages the federal government’s statistical agency that produces GDP to add the disaggregated data. The bad news is that the law doesn’t go beyond encouragement, and provides no new funding to do so.

A new approach to measuring and expressing GDP could revolutionize economic policymaking. While we have no official figures yet, an innovative group of scholars led by Thomas Piketty have generated numbers that get us close to what a “workers GDP” might look like.

Here is GDP growth measured in the traditional way by the Bureau of Economic Analysis: 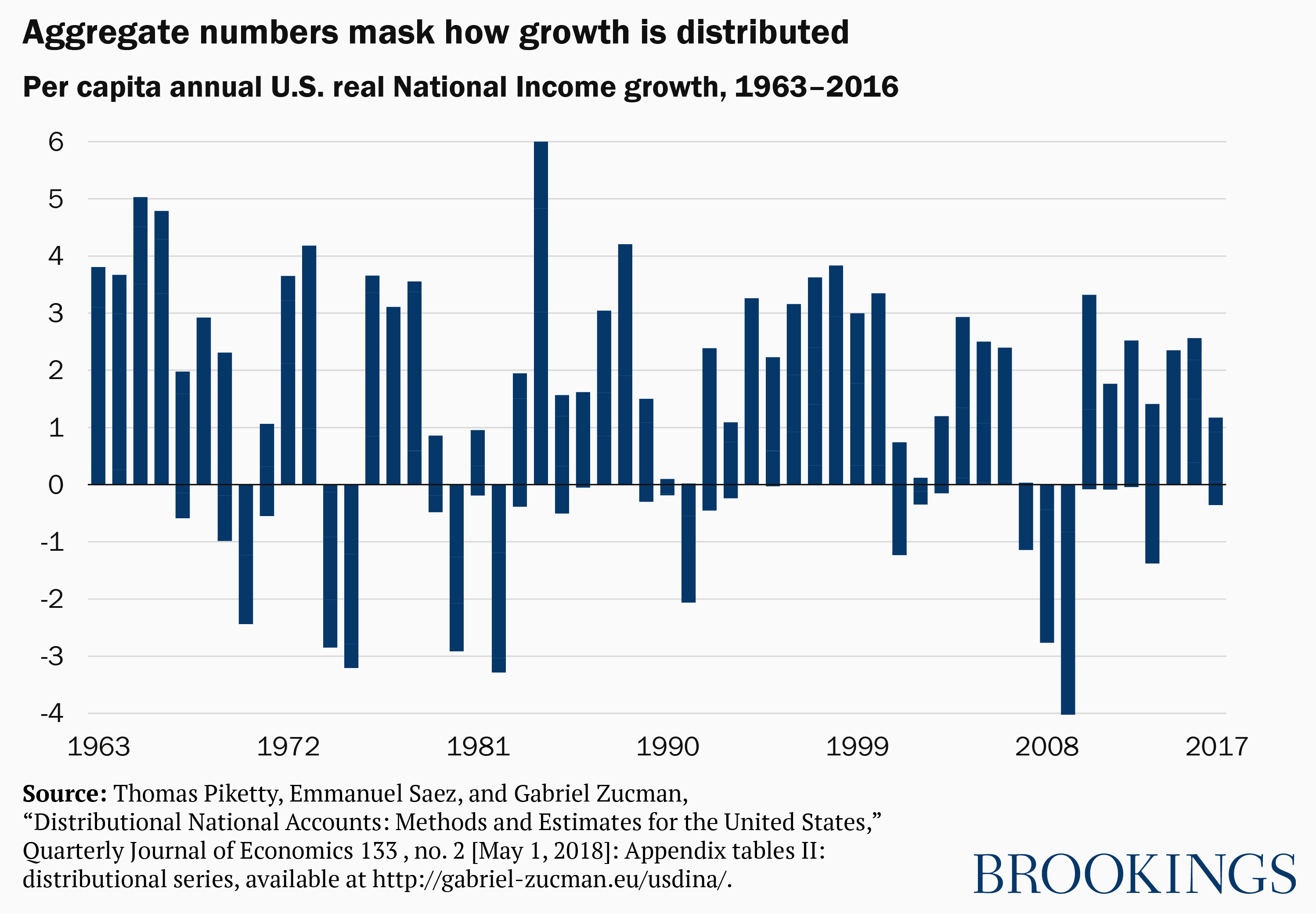 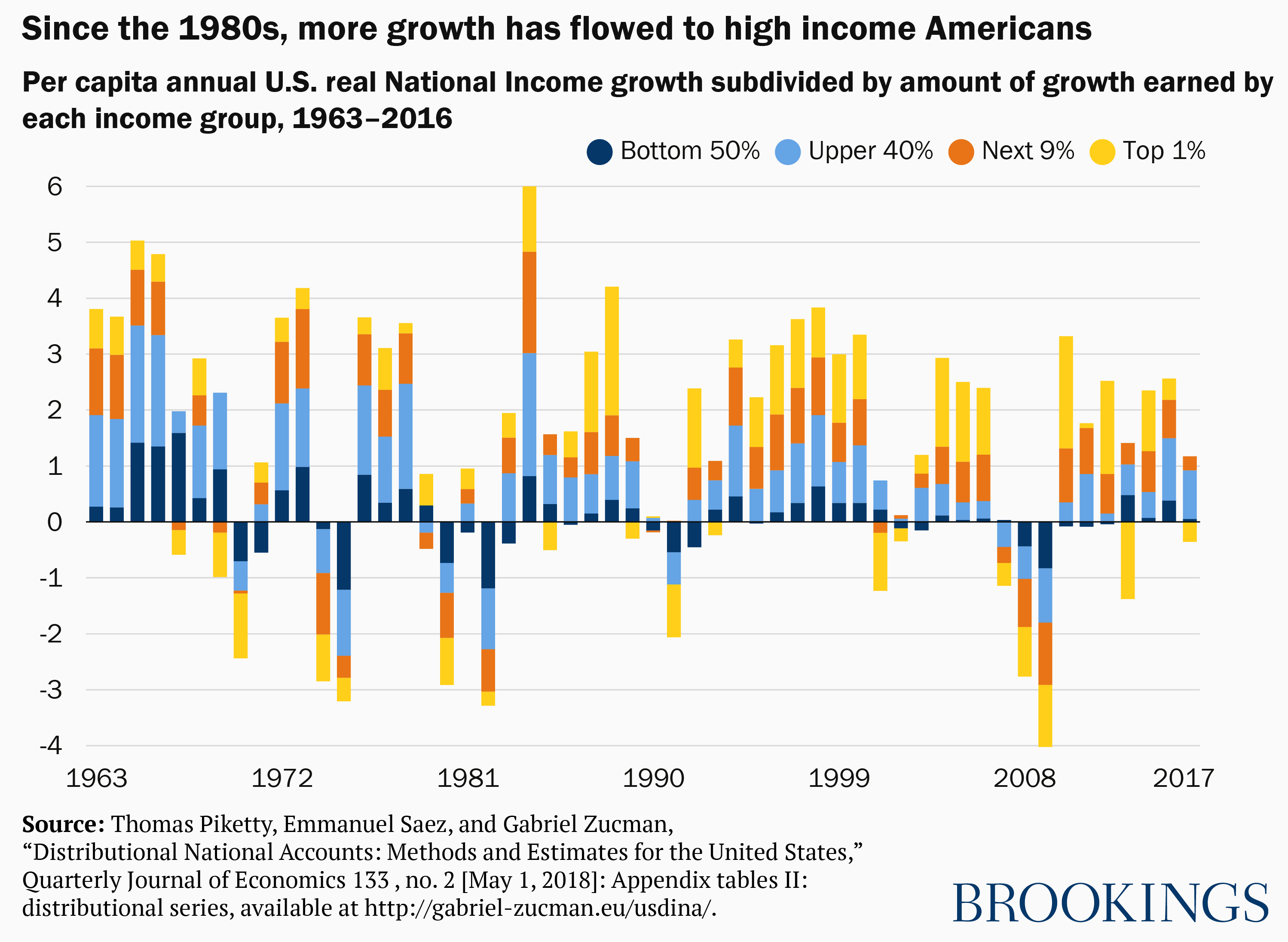 Right about now you may be thinking: Really? That’s the solution? Better economic measures? But the current ones are no longer fit for purpose. Aggregate US GDP data leaves us in the dark. If we do not change the way we conceptualize and therefore measure economic progress, we are unlikely to have very much of it. And not least because we will not be able to hold policymakers properly to account. Better, fairer growth measures are a vital step towards better, fairer growth.

A clearer picture of the disconnect between overall growth and worker welfare will force a deeper examination of what’s gone wrong with the capitalist engine. At root, the answer is: power. The gradual diminution of worker-friendly labor market institutions combined with the rise of employer market power have pushed the power pendulum away from workers.

Without power, workers lose out. This is a lesson that Americans learned and then unlearned over the course of the 20th century. In the 1930s, the federal government put in place laws that enabled workers to organize and established a set of institutions that established some balance between the power of individual workers and their employers and corporations more generally. Over the past 40 years, however, those organizing rights and institutions that served as the bulwark against unbridled inequality have been dismantled one by one. One statistic stands out: in the United States, the share of private sector workers who are union members is now lower than it was before we made the right to organize and strike legal in 1935.

The decline of those labor market institutions is one big reason why growth is no longer broadly shared. The institutional infrastructure of equality is in disrepair. It has to be rebuilt or created anew.

The good news is that there are plenty of good ideas about what that infrastructure needs to be. One of these is to allow workers to organize across an industry, rather than firm-by-firm. Employees in different firms could then come together to bargain with their employers, without disadvantaging any one firm vis-a-vis its competitors. This is just one of many proposals from a team of scholars, advocates and policymakers working on a new project at Harvard law school: Rebalancing Economic and Political Power: A Clean Slate for the Future of Labor Law. This way to think about collective bargaining – so-called “sectoral bargaining” – is new in the US but works in other countries such as Germany.

Restoring worker power does not mean trying to go back in time to the trade unions of old. Rather, it means creating modern mechanisms. Many of these could operate at the international level, too. Todd Tucker, a fellow at the Roosevelt Institute, urges a global labor agreement – what he calls the Worker Power Agreement – modeled on the Paris climate accords.

One of the main challenges we face is the way that inequality across firms affects the power of employers vis-a-vis employees. One of the most important trends is the rising concentration of market power within industries, which means that in many industries, there are fewer firms controlling individual sectors of the economy.

This trend towards concentration is a double: on the one hand, as Richard Reeves has highlighted, concentration means that in many communities, a worker in a particular kind of job may have few – if any – choices of who to work for. Rising concentration can limit people from following their dreams by becoming an entrepreneur. Look at how Amazon buys up potential competitors, limiting innovation and entrepreneurship for those who would like to enter that marketplace. Remember that on the journey to become the giant it is today, Amazon consistently posted losses for the company’s first seven years. Amazon sacrificed profits for dominance and cut its prices below cost to eat into competitors’ growth and, later, acquire them. With the rise of Amazon-branded content, these challenges are only mounting.

But there is another side to the story. Historically, our strongest unions grew up in highly concentrated industries. The auto industry is perhaps the clearest example. Unions only had to negotiate with the “Big Three” – Ford, General Motors and Chrysler – to set terms for most workers in the industry and ensure productivity gains were shared broadly. Today, despite Walmart’s efforts to suppress unions, its dominance in the retail industry has allowed its employees to organize on a national scale, as shown by the formation of the group, Organization United for Respect at Walmart, or OUR Walmart, by a major US union in 2010.

There is a gulf between what capitalism can deliver to workers and what it is delivering for workers. Inequality – in all its forms – has subverted the way our economy functions. We need solutions that fit the scale of the problems. Technical solutions may be necessary, but there will not be sufficient. So long as economic inequality leads to such wide gaps social and political power, workers will always be on the losing side. “Power to the people” is an old slogan. But it may be more resonant and relevant today than ever.