Editor’s Note: This article was originally published on VoxEU.org.

It is well-established that government spending in developing countries has often been procyclical. In other words, government spending has increased in good times and contracted in bad times, thus exacerbating the underlying business cycle. The inability to save in good times to build a war chest for bad times has often led to wrenching financial and sovereign-debt crises.

In sharp contrast, government spending in industrial countries has typically been countercyclical – the widespread fiscal stimulus packages enacted after the fall of Lehman Brothers in 2008 are the latest and most dramatic example in the post-WWII era. Countercylical fiscal policy is, of course, the optimal policy response prescribed by standard macroeconomic models with sticky prices (e.g. Christiano et al 2011; Nakata 2011).

Several explanations have been offered to account for the puzzling behaviour of government spending in developing countries, ranging from limited access to international credit markets in bad times to political distortions that tend to encourage public spending during booms. While some emerging markets have been able to ‘graduate’ (i.e. switch from procyclical to countercyclical fiscal spending), the problem of government-spending procyclicality remains pervasive in the developing world, severely hampering policymakers’ ability to smooth out the business cycle (Frankel et al. 2013).
[1]

But what about tax policy? After all, the revenue side is as important as the spending side in determining the overall stance of fiscal policy. Unfortunately, there is little, if any, cross-country evidence on the cyclical properties of tax policy due to the difficulties of putting together a multi-country database on tax rates. Such a dataset is critical for the purposes at hand because we should judge the stance of tax policy based on the policy instrument (the tax rate) and not on a policy outcome (tax revenues), which is heavily influenced by the strong procyclicality of the tax base (whether income or consumption).

In spite of this fundamental problem, many researchers have relied on data on tax revenues – or, more frequently, tax revenues as a proportion of GDP, which could theoretically be construed as an ‘average tax rate’ – to analyse the cyclical properties of tax policy.
[2]
Unfortunately, however, doing so conveys a highly misleading picture (Vegh and Vuletin 2013). To illustrate this, Figure 1 shows the correlation between the cyclical components of GDP and government revenue as a proportion of GDP for industrial countries (black bars) and developing countries (yellow bars). The majority of the yellow bars lie on the left-hand side of the picture, indicating a positive correlation and hence countercyclical tax policy.
[3]
Whereas the average correlation for developing countries is 0.10 (and significantly different from zero), it is just 0.05 (and not significantly different from zero) for industrial countries. 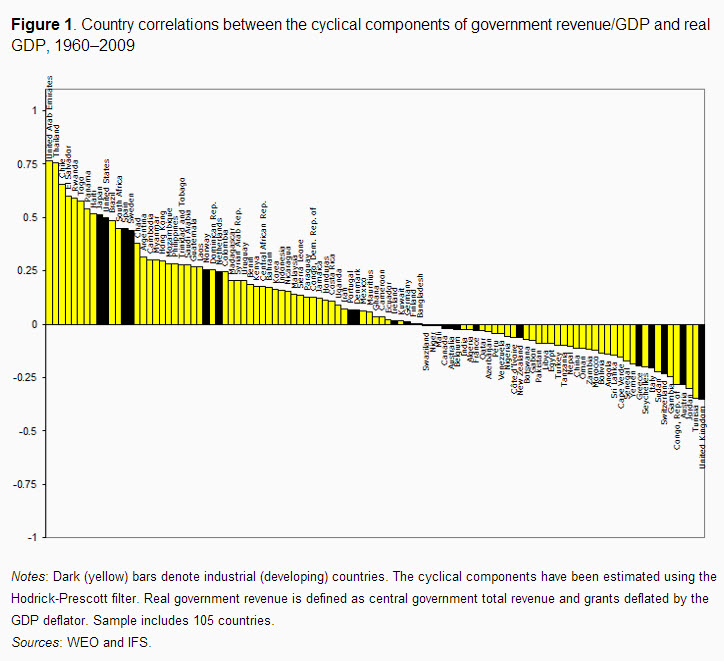 Frequency and size of changes in tax rates

To carry out the analysis, we constructed a novel database on tax rates. Our database covers 62 countries – 20 industrial and 42 developing – for the period 1960-2009 (at an annual frequency) and includes three tax rates:

Unlike government spending, which varies continuously over time, tax rates may remain constant for prolonged periods – presumably because changes in tax rates typically require explicit legislative approval. Indeed, the overall sample frequency of annual tax rates changes is 0.19, 0.18, and 0.11 for personal, corporate, and value-added tax rates, respectively. In other words, tax rates change, on average, about every five years for personal and corporate income taxes, and every ten years for the value-added tax. 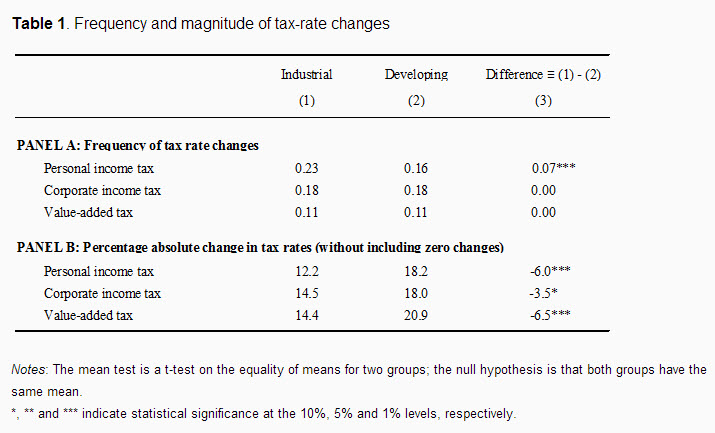 To summarise tax policy in a single number, we constructed a tax index for each country by taking a weighted average of the cyclical components of each tax rate, where the weights capture the relative historical importance of each tax in total revenues for a particular country. As expected, tax policy – as characterised by this overall index – is procyclical in developing countries and acyclical in industrial countries.

As a visual illustration of our main result, Figure 2 presents the correlation between the cyclical components of the tax index and real GDP for industrial countries (black bars) and developing countries (yellow bars). The majority of the yellow bars lie on the right-hand side of the picture (negative correlation), indicating procyclical tax policy (i.e. tax rates tend to fall in booms and increase in recessions). In fact, more than three times as many developing countries pursue procyclical tax policy than pursue countercyclical policy. In contrast, industrial countries are about evenly distributed. Not surprisingly, the US, Germany, and the UK figure among the most countercyclical industrial countries. On the other hand, Spain, Italy, and Greece’s tax policies have been procyclical, with correlation levels close to those of Mexico and Ghana.

Chief Economist for Latin America and the Caribbean - The World Bank 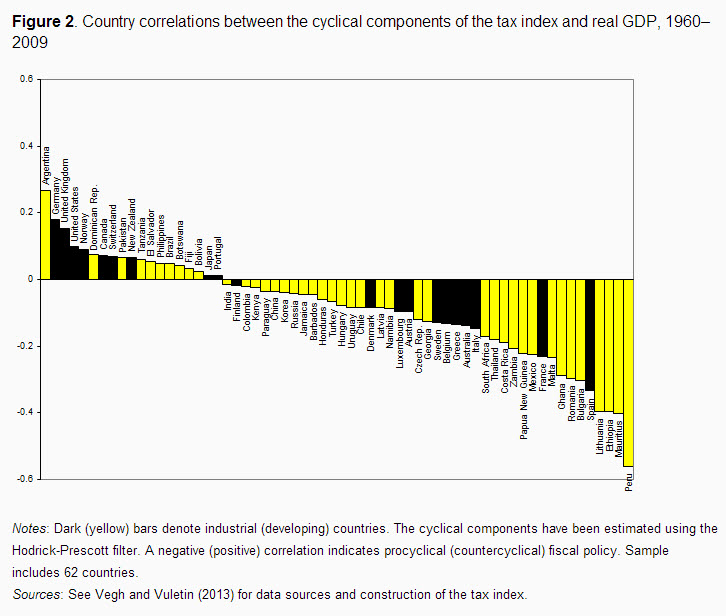 Moreover, Figure 3 shows the relationship for individual countries between the cyclicality of taxation and the cyclicality of government spending. Generally speaking, Figure 3 supports the idea that countries with more procyclical government-spending policy (i.e. more strongly positive correlations between government spending and real GDP) typically have more procyclical tax policy (i.e. more strongly negative correlations between the tax index and real GDP). In other words, tax and spending policies are typically conducted in a symmetric way over the business cycle. 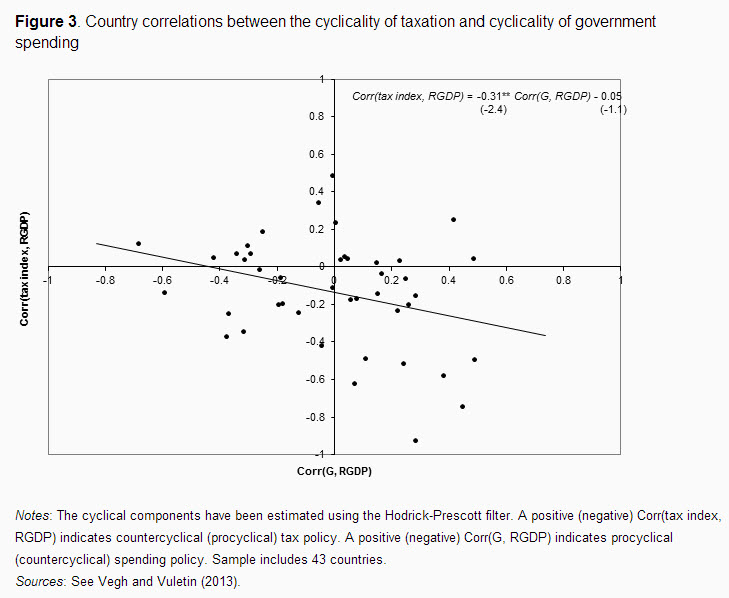 In a world of high volatility – coupled with the novelty of large shocks to developed countries in recent years – procyclical fiscal policy robs policymakers of a critical macroeconomic stabilisation tool. The good news, as reported in Frankel, Vegh, and Vuletin (2013), is that – at least on the spending side – some emerging markets have managed to become countercyclical (Chile being the most prominent example) by improving budgetary institutions and implementing fiscal rules based on cyclically adjusted fiscal balances. Hopefully, similar institutional improvements will allow developing countries to use tax rates countercyclically in the future.

Ironically – and as the recent discussion in the context of the Eurozone on ‘austerity versus growth’ exemplifies – the bad news is that many countries in the industrial world have become de facto procyclical by contracting government spending and raising taxes in the midst of a recession. If the experience of developing countries is any guide, falling into this procyclical trap will only worsen the recession and delay the much-needed recovery.

Vegh, Carlos A, and Guillermo Vuletin (2013), “How is tax policy conducted over the business cycle?”, unpublished manuscript, Brookings Institution and Johns Hopkins University. (A previous version was issued as NBER Working Paper No. 17753.)

[1] Ironically, the problem of fiscal procyclicality seems to have spread to industrial countries – including several Eurozone members – where fiscal policy has been tightened recently in the midst of recessions (Frankel 2012).

[2] See, for instance, Gavin and Perotti (1997); Sorensen, Wu, and Yosha (2001); and Sturzeneger and Wernek (2006). As shown by Riera-Crichton, Vegh, and Vuletin (2012), cyclically adjusted tax revenues (another commonly-used measure) are also a poor substitute for tax rates.

[3] An important clarification on terminology – we will say that tax policy is procyclical (countercyclical) when tax rates are negatively (positively) correlated with GDP, suggesting that tax policy is amplifying (smoothing) the underlying business cycle.

[4] For corporate and personal income-tax-rate data, we use the top marginal rates. Most data were obtained from the World Development Indicators (World Bank) and the World Tax Database (University of Michigan). The value-added tax rate data consist of a single standard rate, and were obtained by the authors from national agencies and other primary sources. See Vegh and Vuletin (2013) for further details.

[5] Similar results follow if we (i) use the percentage change in tax rate and GDP or (ii) control for potential endogeneity problems by resorting to instrumental variables (see Vegh and Vuletin 2013 for further details).