Just how much economic trouble is China in? To judge by global markets, a lot. In the first few weeks of the year, stock markets around the world plummeted, largely thanks to fears about China. The panic was triggered by an 11 percent plunge on the Shanghai stock exchange and by a small devaluation in the renminbi. Global investors—already skittish following the collapse of a Chinese equity-market bubble and a surprise currency devaluation last summer—took these latest moves as confirmation that the world’s second-biggest economy was far weaker than its relatively rosy headline growth numbers suggested.

In one sense, markets overreacted. China’s economy grew by 6.9 percent in 2015; financial media headlines bewailed this as “the lowest growth rate in a quarter century,” but neglected to mention that this is still by a good margin the fastest growth of any major economy except for India. Even at its new, slower pace, China continues to grow more than twice as fast as developed economies. Some doubt the reliability of China’s economic statistics, of course, but most credible alternative estimates (based on hard-to-fake indicators of physical output) still suggest that China is growing at around 6 percent, and that if anything there was a slight pickup in activity in late 2015.

It’s true that construction and heavy industry, which drove China’s growth from 2000 to 2013, are now nearing recession levels. But services—which now account for over half of China’s economy—and consumer spending remain strong, underpinned by solid employment and wage gains. The latest Nielsen survey of consumer confidence ranked China eighth of 61 countries in consumer optimism, and confidence actually increased in the last quarter of 2015. All in all, another year of 6 percent-plus growth should be achievable in 2016.

Markets also exaggerate the risk of financial crisis, with their breathless talk of capital fleeing the country. Most of this so-called “capital flight” is simply a matter of companies prudently paying down foreign-currency debts, or hedging against the possibility of a weaker renminbi by shifting their bank deposits into dollars. In the main, these deposits remain in the mainland branches of Chinese banks. Domestic bank deposits grew by a healthy 19 percent in 2015 and now stand at $21 trillion—double the country’s GDP and seven times the level of foreign exchange reserves. The continued fast rise in credit is an issue that policymakers will need to address eventually. But they have time, because lending to households and companies is backed one-for-one by bank deposits. By contrast, the United States on the eve of its crisis in 2008 had nearly four dollars of loans for every dollar of bank deposits. As long as China’s financial system stays so securely funded, the chance of a crisis is low.

Yet while we should not worry about an imminent economic “hard landing” or financial crisis, there are reasons to be seriously concerned about the country’s economic direction. The core issue is whether China can successfully execute its difficult transition from an industry- and investment-intensive economy to one focused on services and consumption, and how much disruption it causes to the rest of the world along the way. History teaches us that such transitions are never smooth. And indeed, China’s transition so far has been much rougher than the gradual slowdown in its headline GDP numbers suggests.

Remember that when China reports its GDP growth, this tells you how much its spending grew in inflation-adjusted renminbi terms. But to measure China’s impact on the rest of the world in a given year, it is better to look at its nominal growth—that is, not adjusted for inflation—in terms of the international currency: the U.S. dollar. This is because nominal U.S.-dollar figures better show how much demand China is pumping into the global economy, both in volume terms (buying more stuff) and in price terms (pushing up the prices of the stuff it buys).

When we look at things this way, China’s slowdown has been precipitous and scary. At its post-crisis peak in mid-2011, China’s nominal U.S.-dollar GDP grew at an astonishing 25 percent annual rate. During the four-year period from 2010 to 2013, the average growth rate was around 15 percent. By the last quarter of 2015, though, it had slowed to a tortoise-like 2 percent (see chart). In short, while investors are wrong to complain that China distorts its GDP data, they are right to observe that, for the rest of the world, China’s slowdown feels far worse than official GDP numbers imply. 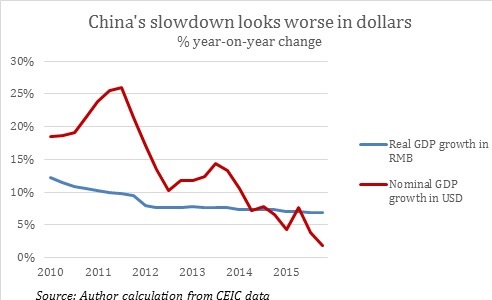 This dramatic fall in the growth of China’s effective international demand has already hit the global economy hard, through commodity prices. In the past 18 months, the prices of iron ore, coal and oil, and other commodities have all fallen by about two-thirds, thanks in part to the slowdown in Chinese demand and in part to the glut of supply built up by mining companies that hoped China’s hunger for raw materials would keep growing forever. This has badly hurt emerging economies that depend on resource exports: Brazil, for instance, is now mired in its worst downturn since the Great Depression. The slowdown also hurts manufacturers in rich countries like the United States and Japan, which rely on sales of equipment to the mining and construction industries.

This helps explain why markets react so fearfully at every hint the renminbi might fall further in value: A weaker currency reduces the dollar value of the goods China can buy on international markets, creating more risk of a further slowdown in an already languid world economy.

There is a silver lining: The flattening of its commodity demand shows China has turned its back on an unsustainable growth model based on ever-rising investment. The question now is whether it can succeed in building a new growth model based mainly on services and consumer spending. As we noted above, growth in services and consumer spending is solid. But it is still not strong enough to carry the whole burden of driving the economy. For that to happen, much more reform is needed. And the pace of those reforms has been disappointing.

The crucial reforms all relate to increasing the role of markets, and decreasing the role of the state in economic activity. China has an unusually large state sector: OECD researchers have estimated that the value of state-owned enterprise assets is around 145 percent of GDP, more than double the figure for the next most state-dominated economy, India.[1] This large state sector functioned well for most of the last two decades, since the main tasks were to mobilize as many resources as possible and build the infrastructure of a modern economy—tasks for which state firms, which are not bound by short-term profit constraints, are well suited.

Now, however, the infrastructure is mostly built and the main task is to make the most efficient use of resources, maximize productivity, and satisfy ever-shifting consumer demand. For this job, markets must take a leading role, and the government must wean itself off the habit of using state-owned firms to achieve its economic ends. And the big worry is that, despite the promises in the November 2013 Third Plenum reform agenda, Beijing does not seem all that willing to let markets have their way.

The concerns stem from the government’s recent interventions in the equity and currency markets. Last June, when a short-lived stock market bubble popped, the authorities forced various state-controlled firms and agencies to buy up shares to stop the rout. This stabilized the market for a while, but left people wondering what would happen when these agencies started selling down the shares they had been forced to buy. To enable these holdings to be sold without disrupting the market, the authorities instituted a “circuit breaker” which automatically suspended stock-exchange trading when prices fell by 5 percent in one day. Instead of calming the market, this induced panic selling, as traders rushed to dump their shares before the circuit breaker shut off trading. The government canceled the circuit breaker, and the market remains haunted by the risk of state-controlled shareholders dumping their shares en masse.

Similarly, Beijing got into trouble in August when it announced a new exchange-rate mechanism that would make the value of the renminbi more market determined. But because it paired this move with a small, unexpected devaluation, many traders assumed the real goal was to devalue the renminbi, and started pushing the currency down. So the People’s Bank of China (PBOC) intervened massively in the foreign exchange markets, spending down its foreign-currency reserves to prop up the value of the renminbi. This stabilized the currency, but brought into question the government’s commitment to a truly market-driven exchange rate.

Then, in December, PBOC made another change, by starting to manage the renminbi against a trade-weighted basket of 13 currencies, rather than against the dollar as in the past. Because the dollar has been strong lately, this in effect meant that PBOC was letting the renminbi devalue against the dollar. Again, PBOC argued that its intention was not to devalue, but simply to establish a more flexible exchange rate. And again, it undermined the credibility of this intention by intervening to prevent the currency from falling against the dollar.

One could argue that these episodes were merely potholes on the road to a greater reliance on markets. This may be so, but investors both inside and outside China are not convinced. The heavy-handed management of the equity and currency markets gives the impression that Beijing is not willing to tolerate market outcomes that conflict with the government’s idea of what prices should be. This runs against the government’s stated commitment in the Third Plenum decision to let market forces “play a decisive role in resource allocation.”

Another source of unease is the slow progress on state enterprise reform.  Momentum seemed strong in 2014, when provinces were encouraged to publish “mixed ownership” plans to diversify the shareholding of their firms. This raised hopes that private investors would be brought in to improve the management of inefficient state companies. Yet to date only a handful of mixed-ownership deals have been completed, and many of them involve the transfer of shares to state-owned investment companies, with no private-sector participation. Plans to subject the big centrally controlled state enterprises to greater financial discipline by putting them under holding companies modeled on Singapore’s Temasek have been incessantly discussed, but not put into action. Meanwhile the number of state firms continues to grow, rising from a low of 110,000 in 2008 to around 160,000 in 2014.

So long as Beijing continues to intervene in markets to guide prices, and fails to deliver on the key structural reforms needed to create a sustainable consumer-led economy, markets both inside and outside China will continue to be nervous about the sustainability of growth, and we will see more “China scares” like the one we endured in January. A clearer sense of direction is required, as is better communication.

For three decades, China sustained fast economic growth by steadily increasing the scope of markets, even as it preserved a large role for the state. Because investors were confident in the general trend towards more markets and more space for private firms, they were happy to invest in growth. Today neither private entrepreneurs in China, nor traders on global financial markets, are confident in such a trend. By the end of 2015 growth in investment by non-state firms had slowed to only about two-thirds the rate posted by state-owned firms, ending nearly two decades of private-sector outperformance.

Doubts are amplified by the government’s failure to communicate its intentions. During the last several months of confusion on foreign exchange markets, no senior official came forth to explain the goals of the new currency policy. No other country would have executed such a fundamental shift in a key economic policy without clear and detailed statements by a top policymaker. As China prepares for its presidency of the G-20, the government owes it both to its own people and to the global community of which it is now such an important member to more clearly articulate its commitment to market-oriented reforms and sustainable growth.