Herbert Stein’s “Law” is expressed as: “If something cannot go on forever, it will stop.” From a public finance perspective, India’s energy sector challenges now encompass its federal structure in an almost “symmetric” manner. The petroleum sector has become a fiscal morass for the central government, and the electricity sector in many states is equally problematic. But, unlike Delhi, states neither have recourse to RBI’s printing press for rupees nor can they “impound” the central bank’s foreign currency reserves.

Both sectors, from a fiscal perspective, are partly off-balance sheet vis-à-vis government accounts. Much like social claims in the EU, energy entitlements in India can impinge on broader fiscal stability. The quasi-fiscal hole due to non-remunerative pricing in the electricity and petroleum sectors each account for about 1% of GDP (see table). 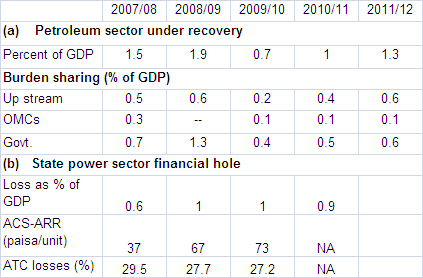 Internationally, retail prices of kerosene, diesel and petrol are usually in the same ballpark; in India, the prices are, respectively, roughly in the ratio 1:5:7. The concomitant distortions in fuel use are becoming more severe. More than kerosene, diesel consumption has reached a level where the refined product has to be imported because of the skewed consumption pattern; diesel is now being substituted for furnace oil—the price of which is market linked—as an industrial fuel.

Bond markets, and even credit rating agencies, eventually take off-balance sheet liabilities, current and prospective, into account. The implications of several years of under recoveries are far reaching. First, government debt management issues; the stock of oil bonds issued by the government in lieu of cash is R1.4 trillion, and outstanding borrowing of oil marketing companies (OMCs) is around R1 trillion. Second, the extant process by which subsidy is provided imparts ambiguity in the central government’s budgetary accounts, which in turn catalyses needless uncertainty in the financial markets. Only a hypothetical amount of R30 billion is included in budget estimates under the central government’s 2002 scheme. Third, the much touted energy security as a strategic objective is undercut. Upstream PSUs are, due to burden sharing, “relieved” of (potentially) investible resources to the tune of 0.6% of GDP. Regarding private sector investors, price caps that are way out of line with prevailing international prices, for example, in the case of natural gas undermines long-term sector economics. Moreover, the pervasive discretionary backdrop is demoralising for all exploration and production stakeholders.

Given the scope of the burden on account of the petroleum sector, the financial sector is often caught off balance in the short run; abrupt requirements for stopgap liquidity and bridge loans transpire under these circumstances. Oil bonds do not have SLR status, so banks don’t have to buy them, or accept them as collateral; OMCs may need explicit government guarantees to access further credit (much like Air India). Of course, the Centre can have RBI print rupees on its behalf, which can be used by OMCs to buy dollars to import crude. Or, as in 2008 (before the crisis), RBI directly gives dollars in exchange for oil bonds (outright purchase or collateralised repo), so as not to destabilise markets. Hence, Stein’s Law may be kept in abeyance for some time.

Turning to the power sector, whilst shortages continue, state government-owned distribution companies (discoms) are curtailing supply in many parts, at the same time as merchant power generators can deliver more electricity (Stein’s Law has kicked in). The primary driver of the financial morass that states find themselves in is the gap between the average cost of supply (ACS) and average revenue realisation (ARR) of 73 paisa/unit, up from 27 paisa/unit in 2005-06 (lower panel of table). Aggregate technical and commercial (ATC) losses continue to be high as curtailment efforts lose traction, with about 27% of electricity generated not being paid for; the cross subsidy in favour of agriculture and household consumption continues to incentivise theft. Tariff revisions have been infrequent and inadequate, much like in the case of petroleum products; it is rather silly to expect regulators to be independent when the sector is dominated by state governments.

Many state governments are only partially releasing budgeted subsidies, down from 94% in 2006-07 to about 55% currently. Not surprisingly, the private sector is feeling skittish; for instance, IPPs reliant on merchant transactions face problems as market prices remain soft and elevated cost of imported fuel is absorbed. A sector workout (akin to 2001) seems imminent, while power sector bonds estimated at R130 billion, which are liabilities of state governments, remain to be liquidated from the previous bailout! It has been extensively documented that lenders to the power sector are nervous. Regulatory forbearance, viz, maturity elongation of loans could temporarily window dress NPAs and mitigate the Centre’s bill for recapitalising its banks. Given the systemic nature of the power sector, how long can central government entities be ring-fenced? Can NTPC really cut supply to a Congress-ruled state, or to any other state that will have assembly elections soon? Coal India Ltd is already claiming payment defaults. Open-ended unconditional subsidised consumption of energy is the “road to fiscal perdition”.

When India killed off cash overnight

Demonetisation: A year after India killed cash, here’s what we can learn