Recent data released by the Obama Administration highlights enrollment in health insurance exchanges or “the Marketplace” which has had many ups and downs over the last months — beginning with the bungled healthcare.gov website as well as optimistic reports from states which have had made great progress in enrolling Americans in the Marketplace as well as expanded Medicaid Programs.

As expected, a surge of individuals – 1.78 million – enrolled in the Marketplace in December, likely to ensure that coverage could begin January 1, 2014. This brings the total of individuals enrolled to 2,153,000 adults enrolled in either a state-based marketplace or a federally facilitated marketplace as of Dec 28, 2013. Several points about this number: it is lower than some had estimated but the enrollment period is still open (until March 31, 2014); additionally, it appears that a majority of the enrolled are between the ages of 45 and 64 (see Figure 1). 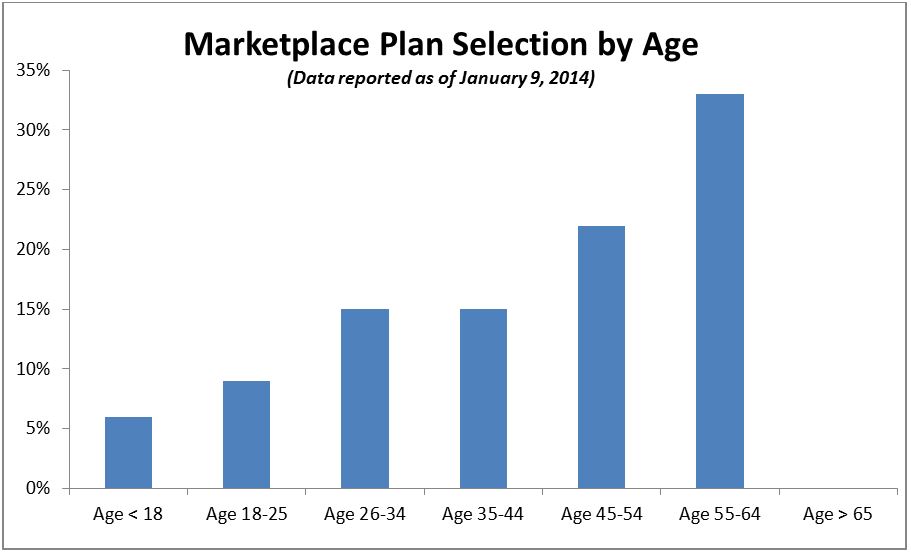 These enrollment numbers are not surprising since there is a general expectation that people who have healthcare needs are more likely to enroll in the Marketplace and that younger individuals or those with minimal health needs will enroll later. And while the final numbers remain to be seen, there are some critical aspects built into the Affordable Care Act to mitigate the effects of a potentially skewed enrollment population. In other words, while it might seem that having older, sicker people could result in cost-shifting or larger repercussions to the American public’s pocketbooks, the law’s authors included provisions which help to offset a potentially skewed population.

The ACA includes at least 4 programs/provisions to offset risk:

Insurers are limited in how much more they charge for these factors; for example they can’t charge the oldest patients more than 3 times what they charge the youngest.

These provisions did not get much attention in the past but given recent enrollment news as well as the President’s announcement several months ago that insurers could continue to offer policies that would not have met 2014 standards, people are starting to really scrutinize what a risk corridor or a reinsurance program is and how that could help with unanticipated costs. There has also been direct criticism of these programs as handouts to the insurance industry or a bailout.

In sum, do not interpret enrollment trends as fateful sticker shock. Having said that, the fact that these temporary programs expire in 2016 tells us that there is a hypothesis that enrollment trends will be smoothed out by 2016, and given the rocky implementation start as well as the inevitable confounding noise of the 2014 and 2016 elections, there is a long way to go before success or failure can be declared.