A range of recent proposals have suggested an emerging consensus on some key elements of reform in Medicare and private health insurance to achieve both improvements in care and reductions in health care spending growth. The Brookings Institution report, Bending the Curve: Person-Centered Health Care Reform, developed by a broad range of health care experts and leaders with bipartisan experience, is one example. The Bipartisan Policy Center and the Moment of Truth Project have also recently released health care reform proposals.

The message from all of these proposals is clear: the health care system must move away from health care financing that is driven primarily by the volume and intensity of services, and instead toward provider payments and benefit designs based at least in part on achieving better results at the person level.  Medicare and private payers are implementing many steps in this direction, such as Accountable Care Organizations (ACOs), episode-based payment reforms, and benefits that enable people to save when they get better care.

States are also implementing many reforms in their Medicaid programs, but less attention has been directed to the best ways to support effective Medicaid reform at the national level. This is despite the fact that Medicaid now covers more than 50 million Americans, including many of the most vulnerable Americans, and is slated to expand further. Total Federal and State Medicaid expenditures rose to approximately $491 billion in fiscal year 2013, and Medicaid was just under 20 percent of States’ overall spending from general funds in 2012—second only to K-12 education spending. While there is considerable innovation occurring in State Medicaid programs to address quality and cost problems, it is occurring through a one-off waiver process that does not necessarily provide strong and systematic support for the most effective reform efforts.

Why isn’t Medicaid more front and center on the health care reform agenda? Many view Medicaid reform as a partisan issue. But as our “Bending the Curve” report showed, bipartisan Medicaid reform is possible. Our Person-Focused Medicaid proposal would replace the waiver process with a Medicaid Shared Savings Framework that gives States greater support and accountability to promote the same types of reforms in Medicaid that are occurring elsewhere in the health care system to achieve higher quality and lowered costs.

In particular, States that lower per capita beneficiary cost trends below a certain level while improving important aspects of health care quality and outcomes would keep a disproportionate share of the savings.  Similarly, those that spend above their cost trend would pay a higher share of the costs. Key distinctions between this proposal and previous ones, such as “block grant” or “per capita cap” proposals, are that the total Federal payments are not capped and States have the opportunity to share in the savings from the delivery system reforms they implement.

In the most recent issue of Health Affairs, Alan Weil of the National Academy of State Health Policy independently proposed a similar concept for Medicaid shared savings to better align State and Federal incentives to control health care cost growth. Moreover, as we noted in our report, some States like Oregon, California, and New York are now implementing waivers that have an element of State shared savings and shared risk.

We hope that these are indications of a growing consensus on Medicaid reform. In this post, we highlight a few key practical issues related to the implementation of a Medicaid Shared Savings framework, and describe some ways in which further progress is possible in the short term.

Medicaid Shared Savings must overcome a number of key implementation challenges, including finding reliable ways to measure per-beneficiary spending and spending benchmarks, developing robust systems of quality measurement relevant to Medicaid beneficiaries, and conducting effective ongoing evaluation to identify what approaches are working or not, and to ensure progress.

Establishing the Medicaid spending benchmark, projecting the value forward in time, and setting shared savings thresholds is a significant analytical undertaking.  One approach to doing so might involve the Centers for Medicare & Medicaid Services (CMS) developing per capita estimates of spending by State for four categories of individuals: aged, blind and disabled, children, and adults. The per capita rates would be based on historical State spending, but could be adjusted to account for the impact of coverage expansions or other population shifts within enrollment categories that might impact per capita cost estimates. Each of the four benchmarks would increase over time; we would suggest setting the growth rates in a way that reflects national spending trends but is somewhat below current-law projected growth.

Shared savings proposals must also account for year-to-year random variation in costs that do not reflect the effects of State reforms. In a Federal-State partnership like Medicaid, we believe the best way to handle such variation is to set a “corridor” around the benchmark, within which the usual Medicaid federal match rate applies. At the end of the year, actual State spending would be compared to the benchmark in each of the four eligibility categories. If the State achieved per capita spending growth below the corridor surrounding the shared savings benchmark while maintaining or improving quality, the Federal government would make additional payments to the State based on a rate substantially higher than the matching rate; conversely, if per capita spending ended up above the corridor, the State would get a significantly lower matching rate for the additional costs.

The Federal savings from implementing Medicaid Shared Savings will depend on the exact specification of the benchmarks and shared savings rates. One key policy tradeoff that will impact Federal savings is how much States should share in the savings. Sharing more savings with the States will give them greater incentives to adopt innovative delivery system reforms, but will reduce the Federal share of any overall savings achieved. Conversely, a lower shared savings rate will increase Federal savings at any given savings level, but may not be enough of an incentive to drive Medicaid reform in the States.

Figure 1 illustrates this idea. In the illustration, states share in half of the Federal savings or additional costs outside of a “usual match” corridor. For example, if New York with a 50 percent State match rate achieved the threshold for reducing per capita spending, it would keep 75 percent of the total savings (50 percent State match savings plus half of Federal match savings). The extent to which States are accountable for costs above the benchmark or savings below it could be phased-in over a period of several years to allow States to implement key delivery system reforms. 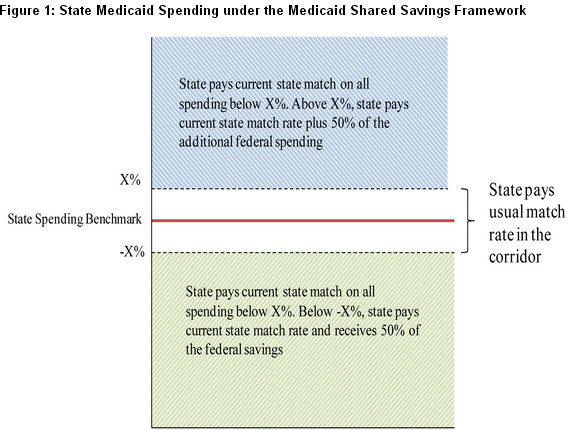 This financing mechanism could be adapted to reflect differences in States’ starting position in terms of their relative per capita costs. For example, the spending benchmarks for States in the bottom quartile of Medicaid spending would be relatively lower initial benchmarks, but the spending benchmark could also have a somewhat higher growth rate. States in the upper quartile of per capita spending could have their benchmark set relatively higher compared to other States, but the growth rate would be lower. This approach would gradually bring together per capita spending benchmarks across all States without creating significant (or any) reductions in Federal payments to any State in the short term.

The foundation of Medicaid Shared Savings should be improving the quality of care for Medicaid beneficiaries. Consistently tracking the quality of care across all 50 States is a challenge in part because of well-documented variations in the use and type of quality measures adopted by each State’s Medicaid program. While all States have differences in needs and priorities, Medicaid also needs a common foundation for performance measurement to promote the program’s core goals. Medicaid Shared Savings should include a consistent set of core measures for access, quality, and outcomes across all State programs.

Through notice and comment rulemaking and other public input, CMS would provide standards and supporting data and methods to help States track and report on quality of care and per capita cost growth for Medicaid beneficiaries. In the first year of implementation, states would collect baseline data on the required quality measures in order to evaluate the maintenance or improvement in the quality of care for the subsequent reporting years. CMS has already identified and published a core set of 26 health quality measures for adults enrolled in Medicaid. But these measures are only collected on a voluntary basis and the extent of adoption by the States is unclear. Moreover, they are mostly process measures (e.g. follow-up after hospitalization for mental illness, Hemoglobin A1c testing, etc) that do not adequately capture important aspects of quality or outcomes.

While performance measures will never be perfect, the implementation of Medicaid Shared Savings should include a plan for steady improvement in performance measures and supporting data to move toward outcomes-oriented measures, including patient-reported outcome and experience measures. Using these measures, CMS would also be expected to develop an evaluation framework not only for tracking how particular States are doing, but also for sharing evidence on which reforms are working best for particular types of patients. Ultimately, the Medicaid Shared Savings framework would tie financial rewards to States for maintenance or improvement in quality of care.

Moving from Waivers to a Standard Medicaid Shared Savings Template

Although there is substantial evidence of gaps in the quality and efficiency of care throughout the U.S. health care system, implementing reforms that both improve care and lower costs is difficult and takes time. A recent illustration is the first-year experience of the Medicare Pioneer program, a multiyear pilot program in Medicare in which participating health care organizations could share in savings that were accompanied by measurable improvements in quality of care for Medicare beneficiaries. Every Pioneer organization showed significant quality improvements, but many did not achieve cost reductions sufficient to provide shared savings, first-year federal savings were limited, and some will not continue in the program.

In Medicaid, states seeking to reform care need not only financial support for the investments that they need to undertake, but also technical support and better evidence from around the country to augment their own program management expertise and capabilities. Even so, many state efforts may require some time and significant modifications to succeed.

To facilitate State participation, and to assure that the program is implemented as effectively as possible, CMS would develop a standard template for State participation in Medicaid Shared Savings. This template would create a clear long-term path forward for States by providing guidance on ways to achieve shared savings through reforms that truly improve the quality of care rather than through other means such as benefit cuts for Medicaid beneficiaries. The template would enable States to rely on managed-care organizations, State-managed programs, or a combination. To phase-in the program, States might begin with specific subgroups of their Medicaid populations, such as adults, certain high-risk/high-cost beneficiaries, or beneficiaries in a particular region. Programs that show early promise could be expanded, while ineffective ones would be terminated or reformed, building on the growing evidence base of best practices in State Medicaid reform.

Proposals like our Bending the Curve report and Alan Weil’s recent Health Affairs article highlight that there is a potential bipartisan path forward on Medicaid reform that could do more to support needed reforms in health care delivery for people who have the most to gain from higher-quality and better-coordinated care. Applying the shared savings framework to Medicaid could empower States to reform their health systems to put patients first without resorting to spending caps or block grants. Instead of putting beneficiaries at risk of losing access to Medicaid services or cutting provider payments, the Medicaid Shared Savings framework will encourage better care for Medicaid beneficiaries and engage both the State and Federal governments in putting health care cost growth on a sustainable path.