As many other Latin American countries, Colombia faced a severe financial crisis in the late 1990s. As is currently the case in the U.S., the root cause of the problem was a rapid increase in loan-to-value ratios that made mortgage delinquencies and defaults climb to unprecedented levels. In Colombia, this was the result of an implosion of real estate prices after the end of the housing bubble of the mid-1990s combined with an increase in interest rates. At that time mortgages were indexed to the nominal deposit interest rate, causing a significant increase in the outstanding value of the loans. With an increase in the numerator and a decrease in the denominator, LTVs rose very rapidly causing an increase in delinquencies and foreclosures that make the current U.S. crisis pale in comparison (see figure).

How did Colombia deal with this situation and what are the lessons for the U.S.? In addition to discarding the existing indexation system, the Colombian government responded by adopting four measures:

In the U.S., it is now argued, as it was then said in Colombia, that households have too much debt to maintain while their assets are losing value. Congress is proposing the idea that households are buried under a pile of debt that is essentially impossible to pay and these homeowners must be rescued. In addition, certain Members of Congress ask, if everyone is getting relief, why not America’s working families?

The figure below shows why households should not be given debt relief as part of the recovery plan in the U.S. as it show that in Colombia, non-performing loans actually decreased momentarily right before the relief announcements (loans had to be performing to be eligible) but increased dramatically afterwards. Of course, the higher the fraction of NPLs the more difficult the problem is. So if households believe that delinquencies are somehow rewarded no rescue package will ever be sufficient. Although it may be tempting for Congress and the administration to provide help to troubled homeowners, it is a bad idea that the U.S. has to avoid, not because it is costly and ineffective, but because it makes matters worse. 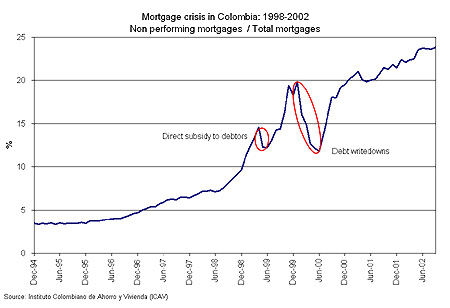 Minister of Finance and Public Credit - Republic of Colombia