As turmoil in the Middle East and North Africa region mounts, concerns for water scarcity seem remote in light of deteriorating humanitarian and political circumstances. Yet, the roots of political rebellion in Syria are integrally linked with access to water resources[1] and rising water scarcity is viewed by some as the Achilles heel of higher growth prospects for the region as a whole.

Today, countries in the Middle East and North Africa (MENA)[2] are the most water scarce globally, with per capita freshwater supplies well below the water “poverty” line of 1,000 cubic meters per year (Figure 1). Arid conditions, low and variable rainfall and high rates of evaporation characterize the natural environment and compound the region’s vulnerability to climate change. In Syria for example, a predicted rise in temperature, lack of rainfall and unpredictable weather could result in desertification of 60 percent of land area.[3]

Such factors, however, have neither discouraged ambitious agricultural development schemes nor dreams of food self-sufficiency and security—frequently at high economic and social costs.

In Saudi Arabia, for example, agricultural development policies and irrigation practices adopted since the 1980s are linked with an estimated depletion of two thirds of the country’s “fossil” water supplies.[4]

Is the pace and pattern of growth linked with rising water scarcity?  From 1967 to 2011—a period characterized by “modern” growth rates, rapid population expansion and the consolidation of new nation states—per capita freshwater resources in several countries fell by an estimated 60 percent (Figures 2,3). Growth in “relative water demand”[5] was commensurate—accelerating in the case of Syria from less than 20 percent in the 1960s to more than 80 percent by the 1990s.

Region-wide, efforts to accommodate growth in demand focused primarily on “supply enhancement” i.e. building dam and desalination capacity, with the costs of such investments likely rising with levels of water development.[6] In Morocco, an estimated 400 percent increase in public expenditure commitments to enhance urban, peri-urban and rural water supply and sanitation was linked with an estimated 75 percent increase in access to potable water from 2004/5-9.[7] Such figures do not bode well for accommodating future growth in water demand, with potential adverse effects for the region’s growth performance.  Maximum rates of output allocated to boost water supplies do not necessarily guarantee higher growth in water constrained environments such as the MENA region. What matters is that the net marginal productivity of capital exceeds the higher output costs of water supply provision and that there are sufficient freshwater resources available.[8] On this score, the link between water constraints and future growth prospects also looks challenging. From 1960-98, growth in MENA countries was very capital intensive, with shares of capital much higher than conventional averages and negligible, frequently negative total factor productivity growth.[9] This trend appears to be continuing: Total factor productivity growth was negative for most of the GCC countries over the 2000s and only slightly above 2 percent for Algeria.[10] 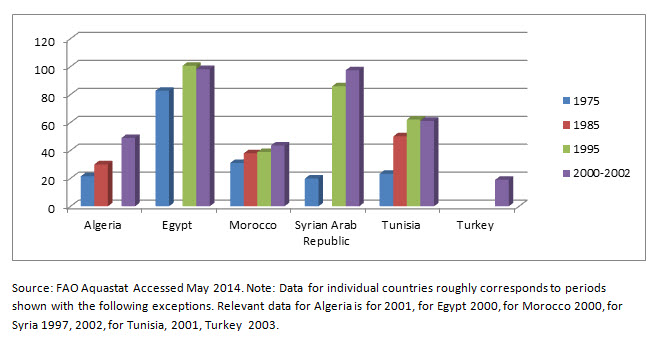 Today, agriculture remains a vital and volatile economic sector, generating 15 percent of Morocco’s GDP, nearly one quarter of the country’s exports and employing nearly half the labor force.[11] It is also the largest consumer of freshwater resources. In Syria, agriculture accounted for 95 percent of total water withdrawals during the 2000s, compared to just 3 percent for domestic use and less than 2 percent for industrial use.[12] Water losses are also high, estimated at 60 percent in some areas due to inefficient irrigation and domestic water supply networks.[13]

Given that the marginal value of water use in irrigation is generally well below municipal and industrial uses, such outcomes are clearly linked with political, security and ideological concerns. One concern in particular is food security.  Arab countries in the MENA region are the largest net importers of cereal in the world and highly vulnerable to variability and shocks in global commodity prices.[14] Generous producer and consumer subsidies for some staple commodities play a role.

In most MENA countries, irrigation water is priced below cost and when combined with energy, fertilizer, credit subsidies and price supports, artificially raises the marginal value product of irrigation water and expectations of what farmers “should” pay for government services.[15] Such measures can also subsidize select groups—in many cases benefitting owners of large farms.[16] Energy subsidies, in particular, enable the transfer of surface water across large distances and pumping of “fossilized” groundwater. Most users do not pay a “resource” charge for groundwater use and in countries such as Syria the proliferation of unlicensed private wells in the Greater Damascus region (together with over-pumping, pollution of groundwater and frequent droughts) have contributed to severe water shortages in the city of Damascus since 2000. [17]

New thinking is clearly required on the balance between efficiency and political, security and ideological objectives underlying water pricing and allocation. A key challenge is to raise productivity, particularly in water use (Figure 4).

This requires further consideration of broader issues such as identifying workable levels of commodity price volatility, the respective roles of domestic production, imports and strategic reserves, the use of trade policy and market investments to close gaps between domestic and border prices and better targeting of support to vulnerable households.[18]

A combination of quantity controls (i.e. standards, bans, permits and quotas), market based interventions (taxes, user fees, and subsidies) market creation (tradable rights and permits) and technology (desalination, recycling, and water efficient plumbing) together with public engagement (information and conservation campaigns) can improve water resource management.[19]  Regional experience in this regard is promising.[20] The combined effects of more flexible water allocation to agriculture, particularly during periods of drought, volumetric pricing (based on irrigation water use, not land area, such as in Tunisia and Morocco), research (such as the International Center Agricultural Research in Dry Areas in Syria) and risk management support to farmers, market and logistics supply chain investments together with water markets (as in Morocco) and “smart” irrigation (see United Arab Emirates) can all help to improve the efficiency of water use and boost agricultural product value per unit of water. Gradual replacement of freshwater with treated wastewater and investments to raise sewage effluent quality to maximize re-use potential in agriculture can increase with more efficient irrigation water pricing.

There is also is a need for greater monitoring and regulations to address deteriorating quantity and quality of both surface and groundwater. Satellite images from the Gravity Recovery and Climate Experiment reveal that the Tigris Euphrates Basin is losing water faster than any other place in the world, except northern India, with the loss of 117 million acre feet of stored freshwater between 2003-2009.[21] Moreover, pollution in the Tigris River caused by the discharge of drainage water from agricultural areas and sewage discharge near Baghdad is a major constraint to freshwater availability in Iraq.[22]

International cooperation across river basins is becoming critical for determining how much water can be consumed while ensuring sufficient flow requirements to mitigate shortages, salinization and pollution for downstream riparians. Such measures appear increasingly challenging but urgent: The International Institute for Sustainable Development estimates that the Jordan River may shrink by 80 percent by 2100.[23] Institutional and organizational arrangements anchored in the subsidiarity[24] principle such as watershed/user associations and river basin management organization can help to lower transaction costs of cooperation.

Preserving groundwater quantity and quality is a particular challenge both within and across countries in the MENA region. In the Sana’a Basin in Yemen, for example, the groundwater table is falling by as much as 6 meters per year and government officials are considering moving the location of Sana’a, the capital city.[25] “Resource” fees which take into account future value of water use lost as a result of aquifer damage can help to mitigate over pumping, in addition to regulations and fees to address pollution. In countries such as Morocco, the artificial recharge of aquifers has had limited but promising benefits.

Given that price elasticities are higher for industrial and domestic use, pricing interventions can be effective but there are poverty and equity concerns. In the Beirut Mount Lebanon region, for example, which accounts for 60 percent of connected households, consumers receive only three hours of daily water supply during the summer months. Lack of metering, inefficient pricing and poor utility performance all play a role, contributing to the growth of, an off-network private water market accounting for 75 percent of total household water expenditure.[26]  For industrial and domestic uses, increasing block tariffs, improved metering and pollution control, refurbishment of water infrastructure and investments to minimize industrial and domestic per unit water use can all boost water savings. Downsizing, greater financial independence and performance standards for public water utilities together with private concessions, appropriate regulatory oversight of tariff caps, service standards and “work” funds can improve service quality as well as connectivity to poor households.

New technologies for wastewater recycling are advancing rapidly, with significant potential for expanded use in MENA countries. In Libya, for example, only 7 percent of wastewater generated is treated and reused in agriculture and landscaping.[27]  Similarly, with declining costs and rapid growth in capacity, desalinated water is becoming ubiquitous, supplying more than half of the region’s municipal water needs, to the point where countries such as the UAE are building the world’s largest underground reservoir of desalinated water to safeguard supplies.[28] Environmental costs of desalination are rising, however, given high energy costs and adverse impacts on seawater salinity and marine life.

As economic, social and political pressures mount in Syria, Iraq, Jordan, Egypt, Libya and Yemen, the international focus will shift increasingly to security and conflict-related engagement. Yet the grim realities of rising water scarcity and its implications for growth, health and living standards can no longer be sidelined in efforts at international dialogue and engagement.

[1] From 2006-11, an estimated 60% of Syria’s land experienced one of the worst droughts in modern history and displaced 1.5 million people, contributing to rising social tensions and instability. Climate and Security Report. http://www.washingtonpost.com/blogs/wonkblog/wp/2013/09/10/drought-helped-caused-syrias-war-will-climate-change-bring-more-like-it/

[2] Countries surveyed in this note correspond roughly to the World Bank’s Middle East and North Africa region with the addition of Turkey and excluding Djibouti.

[4] Nonrenewable aquifers represent the major source of water in Saudi Arabia and it is estimated that these reserves may have been formed 600 million years ago. Water in these aquifers can be found at depths ranging from 100-500 meters and up to 2500 meters. For a more complete discussion see E. Elhadj 2004 Camels Don’t Fly, Deserts Don’t Bloom: an Assessment of Saudi Arabia’s Experiment in Desert Agriculture. Occasional Paper No. 48, School of Oriental and African Studies/King’s College London. University of London.

[5] Calculated as freshwater withdrawals as a percentage of total resources.

[6] For a discussion of the US experience, see K. Frederick 1993 Balancing Water Demands With Supplies. World Bank Technical Paper No. 189.

[11] World Bank 2013 Project Appraisal Document on a Proposed Global Environment Facility Trust Fund Grant In the Amount of US $ 6.44million to the Kingdom of Morocco For a Social and Integrated Agriculture Project.

[12] World Bank 2007. Making the Most of Scarcity: Accountability for Better Water Management in the Middle East and North Africa. Washington DC: International Bank for Reconstruction and Development. Water withdrawal (water abstraction) is the gross amount of water extracted from any source, either permanently or temporarily for a given use.  It can be either diverted towards distribution networks or directly used and includes consumptive use, conveyance losses and return flow.

[16] The majority of Morocco’s agricultural exports (75%) and half of agricultural GDP are generated by a small group of commercial farmers producing high value irrigated crops for international markets and milk for domestic consumption. World Bank 2013

[18] For a review of country experiences see World Bank 2007 Managing Food Price Risks and Instability in an Environment of Market Liberalization.

[21] J. Hammer2013 Is a Lack of Water to Blame for the Conflict in Syria? Smithsonian Magazine. June.

[24] Tasks should be undertaken by the most localized entity competent to do so. For a more complete discussion see Internal Evaluation Group (IEG) Water and Development: An Evaluation of World Bank Support 1997-2007.World Bank.

Putin is an opportunist, and he's going to use [cyber and information operations]  in combination with one another.

State legislators and the future of transportation