In the Handbook of Safeguarding Global Financial Stability, the chapter “Capital Mobility and Exchange Rate Regimes” begins “Forced to state all the insights of international macroeconomics while standing on one leg, one could do worse than raise a foot off the ground and say something like:

Admittedly, that entry was written by one of us.

The conclusion that countries with open capital markets must choose between monetary autonomy and exchange-rate management is a centrepiece of international macroeconomics. Its real-world relevance has been confirmed by a number of empirical studies over the past decade – for example, Aizenmann et al. (2010) provides recent evidence regarding the tradeoffs suggested by the trilemma.1

Despite this evidence, the trilemma has come in for some tough times lately in policy debates.

Governments can ’round the corners’ of the triangle representing the policy trilemma (see Figure 1) with intermediate policies such as softly pegged exchange rates or temporary, narrowly targeted capital controls. 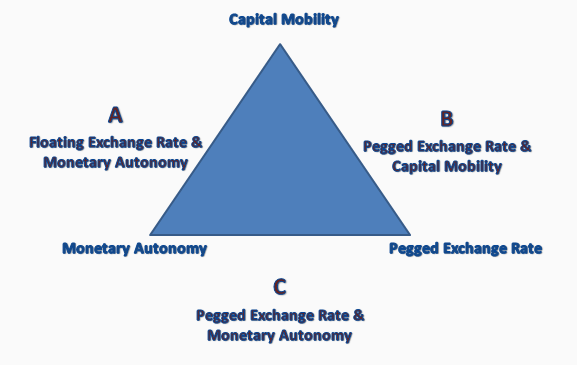 Others attack the policy trilemma from the opposite direction, arguing that it paints too rosy a picture of the ability of monetary authorities to manage an economy.

While there is some truth in both of these positions, our recent research suggests that the policy trilemma is still a very relevant way to organise one’s thinking about the determinants of a country’s monetary-policy autonomy as it operates in the world economy.

The simplest view of the policy trilemma is that countries with fully open capital markets and tightly pegged exchange rates forego all monetary autonomy (side B in Figure 1). A more nuanced view is that the trilemma represents trade-offs, with a country having greater monetary autonomy as it either allows more exchange-rate flexibility or as it prohibits some types of international capital flows.

But do these partial policies afford a full measure of monetary-policy autonomy? The answer from our research is a qualified “no” (Klein and Shambaugh 2013). We find evidence that:

The argument that the policy trilemma overstates the efficacy of monetary policy has recently been made by Professor Hélène Rey (2013a, 2013b). Her argument is that widespread co-movement in capital flows, asset prices, and credit growth across countries – a global financial cycle – makes the trilemma moot. She declares the death of the trilemma, writing that this financial cycle, “transforms the trilemma into a ‘dilemma,’ or ‘irreconcilable duo’: independent monetary policies are possible if and only if the capital account is managed.”

Rey finds that an important determinant of this cycle is monetary policy in the US, and also that the global financial cycle is correlated with the implied volatility of US S&P 500 index options (i.e. the VIX). This is an issue of interdependence or, perhaps – more darkly – contagion. But this is distinct from whether monetary policy autonomy depends upon the exchange-rate regime.

Credit conditions are important for macroeconomic performance, as has been dramatically demonstrated over the past five years. This period has also surely shown, however, that monetary policy importantly affects interest rates and exchange rates and – through these channels – macroeconomic outcomes.

The trilemma does not rule out common shocks that affect all economies, and monetary autonomy does not guarantee insulation from the world economy. Rather, an implication of the trilemma is that there is more scope for addressing shocks with monetary policy in a country with floating exchange rates – or with strong controls on international capital flows – than for a country with a pegged currency and open capital markets.

Events that illustrate the point

Events over the past decades illustrate the real-world relevance of the policy trilemma. For example: 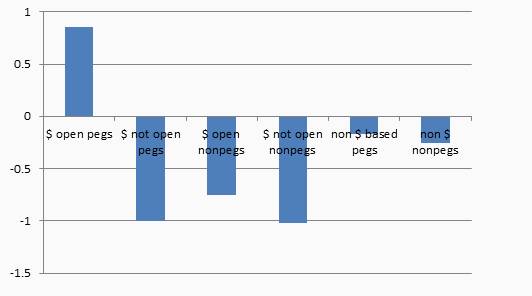 Note: Change in US short term rate from 2004 to 2005 was roughly 1.8 percentage points. The figure shows that on average, only countries pegged to the dollar with open financial markets followed the move.

This single example is representative of a broader tendency.

Figure 3 shows overall averages since 1973, where open pegs move interest rates with the country they peg to more than other countries. Our research demonstrates that soft pegs occupy a middle ground, with more autonomy than pegs, but less than floats (the coefficient on the change in the base interest rate is lower for soft pegs than it is for tighter pegs, but higher than it is for floats – see Table 3 in Klein and Shambaugh 2013).3 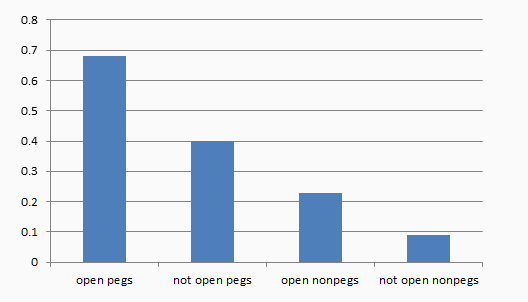 In contrast, there is little difference between the coefficients presented in the top two rows, reflecting the result that monetary autonomy in countries with open capital accounts and limited capital controls are quite similar. By comparison, closed capital accounts do provide scope for monetary autonomy.4 In addition, our paper shows that countries that follow the base rate more closely react less to local conditions, suggesting these measures are a good proxy for true monetary policy autonomy.

The trilemma also speaks to events during the past few years. In the midst of the Global Crisis:

These experiences, along with our research findings, suggest that the trilemma is alive and well. This is important for the current policy debate.

There is a widespread debate over when the Fed will move towards ‘tapering’ its current stimulative monetary policy. Many emerging-market countries are feeling the effects of this. Countries with floating exchange rates have a choice – either to allow their currencies to depreciate, or to raise their own interest rates, or some combination of the two.

Financial cycles and large country interest rates certainly have important impacts around the globe, but our evidence suggests that countries that float or close capital markets maintain some freedom over how they approach these shocks.

Bluedorn, John C and Christopher Bowdler (2010), “The Empirics of International Monetary Transmission: Identification and the Impossible Trinity”, Journal of Money, Credit and Banking 42(4): 679–713.

2 Klein (2013) suggests a framework that focuses on longstanding capital controls (walls) as opposed to open countries or temporary controls (gates) and documents that there are differences between them in terms of their efficacy.

3 These differences are statistically significantly different from zero.

4 This table uses a capital control classification based on Chinn and Ito (2006). Using a classification that focuses on the temporary or permanent nature of the policies, we find that targeted temporary controls provide no more autonomy than open financial accounts. Only comprehensive gates that cover a wide range of asset classes appear to provide any more policy autonomy.

India’s economic prospects and role in the world economy