We’ve come a long way from the days when the International Monetary Fund so often advised governments to cut their budget deficits that some joked that IMF stood for It’s Mostly Fiscal. A new working paper from three IMF economists underscores just how much things have changed.

Their bottom line: The wisest course for some countries—the U.S. among them—would be to do nothing at all to reduce their debt burdens. “Distorting your economy to deliberately pay down the debt only adds to the burden of the debt, rather than reducing it,” they write.

Yes, you read that right. Amid all the hand-wringing about the size of the U.S. government’s debt, some economists at the IMF are advising: Don’t worry about it.

While some countries (Greece, Italy, and Japan, for instance) urgently need to reduce their high debt loads, the deputy director of the IMF’s research department, Jonathan Ostry, and colleagues Atish Ghosh and Raphael Espinoza, argue that others (including the U.S., Germany, South Korea, and Australia) can and should fund themselves at today’s exceptionally low interest rates and live with their debt but allow the ratio of debt to GDP to decline over time as their economies grow or revenue windfalls occur. (To be clear, that still requires some fiscal discipline to avoid big annual budget deficits that would add to the debt burden.)

Now, this isn’t the first time that the IMF has slapped down the austerity crowd. It has, for instance, made the case for borrowing more to finance public infrastructure. Nevertheless, this is an eyebrow-raising moment.

To those who say that big public debts are bad for growth, the economists say: Yes, the taxes needed to service debts are bad for an economy, but it doesn’t follow that paying down the debt is better. “Where countries retain ample fiscal space,” they write, “the cure would seem to be worse than the disease—the taxation needed to pay down the debt will be more harmful to growth than living with the debt.”

And to those who argue that living with a large debt is risky because it may preclude borrowing in a catastrophe like the global financial crisis, they say: “This argument has considerable merit” even for strong economies like the U.S. “but it is a matter of balance. Lower debt provides larger margins for unexpected contingencies, but if it comes at the cost of investment and growth, the margin may be somewhat illusory.” 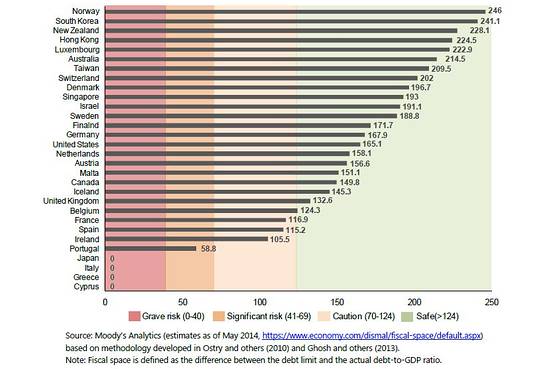 One tricky task is figuring out which countries have the luxury of treating their debt with benign neglect and which don’t. As is the IMF custom these days, they’ve got a color-coded scheme. It shows which developed countries are so heavily indebted that they must cut their debt (pink), which have a lot of fiscal wiggle room (green) and which are in between (orange). The new working paper reproduces this chart (see above) that Moody’s Analytics made based on the IMF economists’ methodology.