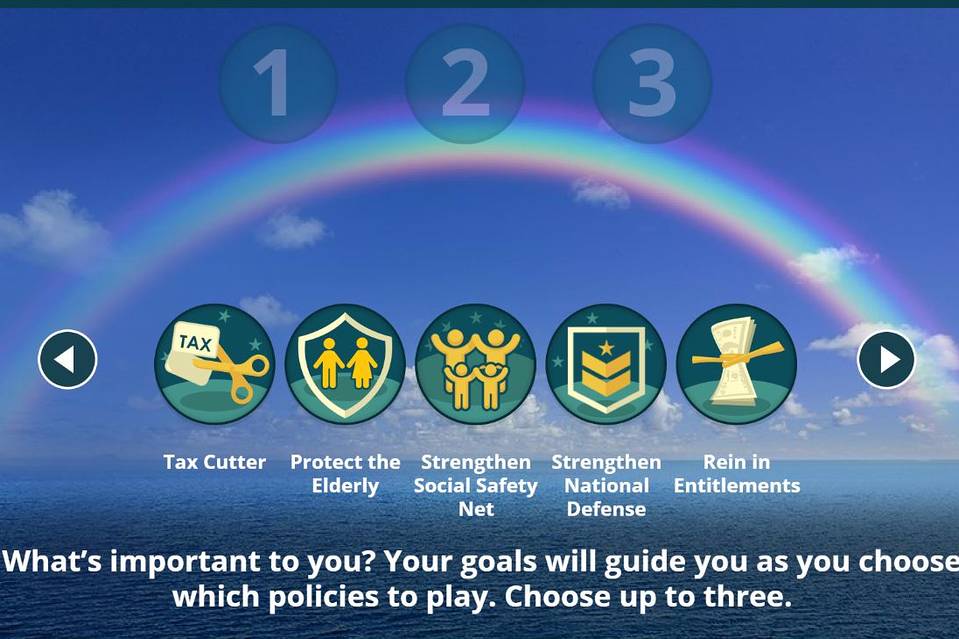 Confronted with more than 100 spending and tax options to restrain the rise of the federal debt, Americans who play “The Fiscal Ship” computer game to completion overwhelmingly choose tax increases over spending cuts, the game’s creators report. Within that, a carbon tax is the option picked most frequently, they said.

The Fiscal Ship, a free game online at www.fiscalship.org, has been played almost 46,000 times since it was launched in late April by the Brookings Institution’s Hutchins Center and the Woodrow Wilson International Center for Scholars. Players choose their own governing goals, such as “reduce inequality” or “shrink government,” and then pick from a wide variety of options on taxes and spending to achieve their goals and put the federal debt on a sustainable trajectory over the next 25 years.

The three options chosen most frequently by people who have played the game to completion are a $25-a-ton carbon tax; eliminating tax breaks for oil, gas, and coal; and lifting the ceiling on the Social Security payroll tax to apply to all earnings. (That 12.4% tax, split evenly between employers and employees, currently applies to only the first $118,500 of earnings.) Of the 15 most popular options in the game, 10 would raise taxes. Enacting immigration reform, which the Congressional Budget Office says would reduce annual budget deficits, also is a popular choice.

Of the players whose age we know from Google Analytics, about 56% are 18 to 34 years old, a segment of the population with which Bernie Sanders had a lot of support. So perhaps it’s not surprising that a carbon tax and a new tax on financial transactions, both of which Mr. Sanders supports, are particularly popular with the game’s players.

The most popular money-saver on the spending side of the budget is reducing patent protection for makers of genetically engineered drugs–known as biologics–that is estimated to reduce spending by Medicare and Medicaid.

Among the least popular options picked by those who have played the game to completion are cutting tax rates on individuals; eliminating the tax on interest, dividends, and capital gains; imposing a new 15% flat tax; tightening the eligibility rules for food stamps (the Supplemental Nutrition Assistance Program, or SNAP); and cutting spending on the National Science Foundation and the Environmental Protection Agency.

Here are the most popular options, some of which increase the deficit (such as spending more on infrastructure), ranked in order:

The 15 options chosen least frequently, in order of least popular: