Although much media coverage around health care reform recently focused on the Obamacare rollout, another profound but far less publicized change could be coming. Congress is closer than ever to correcting the sustainable growth rate (SGR) formula, an ill-conceived policy that annually threatens physicians with indiscriminate cuts in fees to control Medicare spending.

In a previous post, we explained the origins of the SGR in the 1997 Balanced Budget Act and reasons it failed to work as planned. Now, there are 2 congressional proposals intended to fix the problem.

If passed, such legislation would make the biggest changes to Medicare physician payments in more than a generation. The proposals would repeal the SGR-mandated cuts and essentially eliminate roughly $140 billion in planned physician fee rollbacks. In return, Medicare would largely change its way of paying physicians. Most importantly, Medicare would move away rapidly from traditional fee-for-service payments and hold physicians more accountable for quality. Such an approach could help physicians change practices to deliver better and less expensive care—reshaping health care delivery across the nation. However, major areas of uncertainty remain.

Two congressional proposals, one jointly from the House Ways and Means and Senate Finance Committees and the other from the House Energy and Commerce Committee, would cancel the 24.4% SGR-imposed cut. The first completely freezes existing Medicare fee-for-service rates; the second offers only 0.5% annual increases to these rates for the next decade. Payment rates will continue to decrease in real dollars because they won’t keep up with overall inflation. Thus, as the years go by, fee-for-service models will become progressively less viable.

Between the proposals, there are 2 major strategies for physicians to handle this, both of which try to push them to provide greater value and less volume. First, both congressional proposals would create a new rewards program comparable with those in other service-oriented professions: physicians would get paid a base amount but have the chance to earn bonuses based on the quality and overall efficiency of the services. In many ways, this isn’t a big change for hospitals and physicians. The Medicare program, through the Centers for Medicare & Medicaid Services, created various “pay-for-reporting” rewards for hospitals (the Hospital Quality Initiative since 2003), physicians (the Physician Quality Reporting System since 2006), and other providers for reporting certain metrics, such as how many patients are counseled for smoking cessation.

The rewards program consolidates the patchwork affecting physicians into a unified program, with different weights for quality measuring and improvement, resource use, and meaningful use of electronic health records. It will replace the existing programs, such as the Physician Quality Reporting System, Electronic Health Record Meaningful Use, and the Value-Based Modifier. In the joint proposal from the House Ways and Means and Senate Finance Committees, the bonus program is zero-sum (high-performing physicians get a bonus and low performers can get docked 4% beginning in 2017, then up to 10% by 2020), but in the House Energy and Commerce Committee’s proposal, all physicians could earn up to a 1% bonus. To support primary care, Medicare also will pay for care-coordination services (like phone calls and other patient outreach) and encourage practices to achieve certification as medical homes.

Still, this first strategy does little that is truly novel and indeed could be viewed by many physicians as more micromanagement of how they practice. The second, more innovative way for physicians to earn more is switching to alternative payment models, which is pushed strongly by the joint House Ways and Mean and Senate Finance proposal. Such models could include payment bundles (for example, fixed pricing for a heart surgery, with a several-month “warranty” against complications) or shared savings programs (whereby a large health network assumes all aspects of a patient’s care and gets a bonus if budget targets are hit). All of these payment models discourage overuse because physicians don’t get paid more for simply doing more. Further, because they give physicians more flexibility in how they use resources for individual patients, bundled payments could support better cooperation between various care settings (see Figure) as well as telemedicine, web-based support services, care teams, and other services that are paid poorly—if at all—under Medicare fee-for-service. 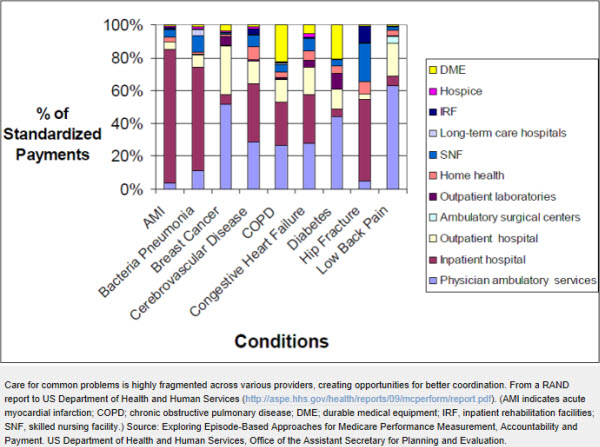 The proposed shift into alternative payment models would happen fairly quickly. The House Ways and Means draft, for example, offers full 5% bonuses only if physicians switch one-quarter of all their Medicare billing to such payments within 3 years and then up to three-quarters of all billing by 2021. (The precise details of the most recent draft are somewhat more complicated and can be seen here.)

Will the Proposed Changes Help?

The shift into alternative payment models makes intuitive sense—emphasizing value over volume—and many studies have found improvements in quality. But no one really knows if they work to reduce costs on a country-wide scale. For example, while some individual reforms have led to savings in the private sector, the Congressional Budget Office in 2012 found that Medicare’s small value-based payment pilots generally failed to save money within a few years, with the exception of a cardiac surgery bundled payment.

Even bundled payments have many complexities. As a RAND report commissioned by the Department of Health and Human Services showed, it’s hard to know who should be in charge of a patient’s care, how to adjust payments for a patient’s preexisting conditions (called risk-adjustment), and how to measure quality. Currently, the Centers for Medicare & Medicaid Innovation has started to implement a new round of bundled-payment pilots, but results are not yet available.

Population-wide efforts to both improve quality and control costs also have limited evidence. The ambitious Pioneer accountable care organization pilot, in which 669 000 Medicare patients entered a type of shared-saving program, showed significant quality improvements but only limited overall cost savings in its first year. Moreover, all of these reforms require significant investments of effort and money by physicians to redesign practices.

In addition, if fee-for-service payments promote too much medical care, alternative payment models can have the opposite problem: they incentivize physicians to cut corners. For example, if every extra referral to a specialist or imaging test could ultimately come back to hurt a physician’s bottom line, he or she may not go the extra mile. Part of the solution is to measure quality and to help patients identify high-quality practices, to ensure that changes in practice don’t mean worse care. However, existing quality measures have been strongly criticized for not capturing what really matters to patients. Another part is to watch carefully for other indications that the changes in payment really do promote the professionalism that physicians often find missing in fee-for-service payments today. In this regard, it is encouraging that many providers in alternative payment models report higher satisfaction in practice and more confidence that patients are getting the care they need.

Although challenges remain, an accelerating shift away from fee-for-service Medicare payments is inevitable. Prior major changes in Medicare payments, such as the switch to diagnosis-related group bundles for inpatient care, the transition to a relative value unit–based physician fee schedule, and the creation of the Medicare Part D prescription drug program, all had to be implemented with incomplete evidence. No large pilot programs were practical, and the reforms were modified along the way with experience. It is highly likely that the permanent SGR fix will proceed similarly, although it’s likely a brief temporary patch may precede a permanent fix.

What is clear is that these reforms will create a lot more opportunity for clinicians. For years, the SGR has sucked energy away from reform efforts, and tightening fee-for-service payments have made it difficult to make ends meet in practice, let alone lead the implementation of real reforms in care. If the payment system is permanently fixed, clinicians will face some new challenges but could then concentrate on real innovations.