It is well-known that government spending has historically been procyclical in the developing world (Tornell and Lane, 1999; Kaminsky, Reinhart, and Vegh, 2004; Frankel, Vegh, and Vuletin, 2013).[1] Thus, government spending in these regions typically increases during periods of expansion and decreases during periods of recession. Unfortunately, this procyclical fiscal behavior reinforces output fluctuations, exacerbating booms and aggravating busts. Traditional explanations for this undesirable behavior have mostly revolved around the explicit or implicit notion that fiscal procyclicality is the deliberate result of political economy distortions and weak institutions (e.g., policymakers’ short-sightedness and political pressure to spend when resources are available in good times, leaving few resources to spend in bad times).

Since the global financial crisis and, more recently, the sudden severe drop in commodity prices, important and frequent revisions in output growth forecasts around the world have become a new norm. This trend, in turn, has triggered heated debates in both policy and academic circles and the media about how governments should handle these frequent reassessments.

1. Over-optimism in output forecasts (Frankel, 2011a; Frankel, 2011b; Frankel and Schreger, 2013). This literature focuses on the relevance of over-optimism in output forecasts (defined as a situation where forecasted output growth is systematically above ex-post realizations) on fiscal policy procyclicality. Over-optimism in forecasts, especially during booms, can help explain excessive fiscal spending and deficits as well as the failure to run surpluses during periods of high output. Given this view, a growing concern has focused on how to reduce the over-optimism bias as a mechanism to ameliorate fiscal procyclicality.

2. Real-time data and misinformation literature (Forni and Momigliano, 2004; Golinelli and Momigliano, 2006 and 2008; Bernoth, Hughes Hallett, and Lewis, 2008; Cimadomo, 2012; Croushore and van Norden, 2013). This literature argues that, in fairness to policymakers, their fiscal actions should be judged based on the information about the state of the economy available to them at the time policy decisions are made. They argue that using ex-post data (available only after policy decisions have been made) unfairly incorporates the influence of the misinformation that the policymakers had at the time they made the decision. Moreover, they point out that such a distinction has important practical implications because policymakers have better intentions (countercyclical) based on real-time data, than final outcomes, based on ex-post data. In this context, naturally, misinformation existing at the time of policy decisions is to blame.

A recent paper by Avellan and Vuletin (2015) takes issue with these views and shows that, in fact, traditional political economy arguments and weak institutions help explain how governments handle unanticipated output fluctuations.

Figure 1. Over-optimism in output forecasts as a cause of fiscal procyclicality.
Developing versus industrial countries
Panel A. Average degree of over-optimism. 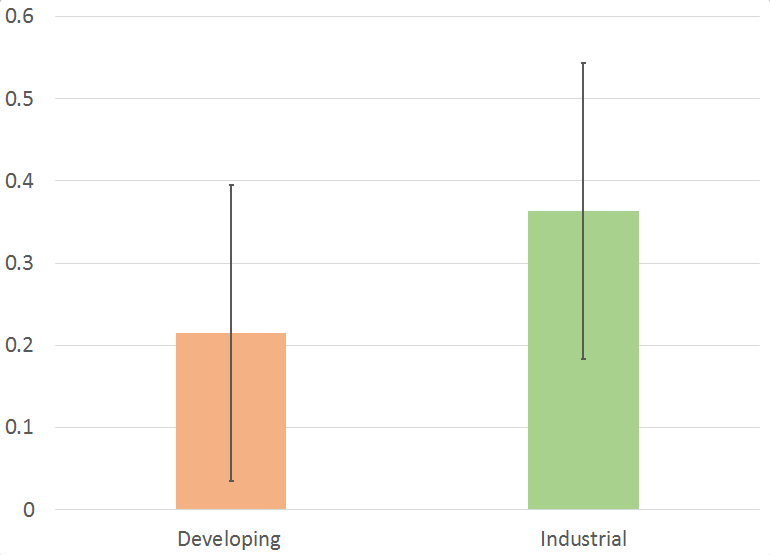 Panel B. Correlations between growth rates of government spending and GDP. 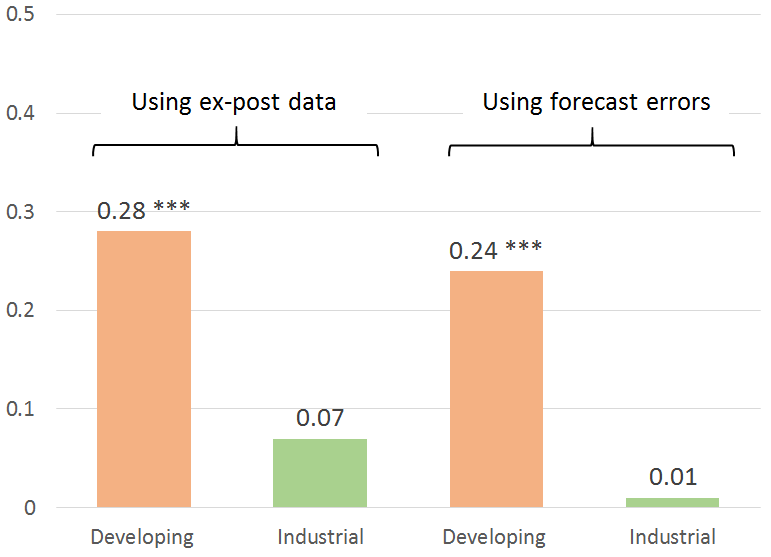 As a corollary of this decomposition analysis, even countries showing no output forecast bias (no over-optimism or pessimism) could still show procyclical behavior. Indeed, fiscal procyclicality seems to be equally pervasive when separating countries by whether or not there is a systematic bias in forecast errors (Figure 2). This similarity in fiscal behavior still holds when focusing on the forecast error component (Figure 2).


Figure 2. Over-optimism in output forecasts as a cause of fiscal procyclicality.

Countries with bias versus countries without bias in forecast errors (FE).
Correlations between growth rates of government spending and GDP. 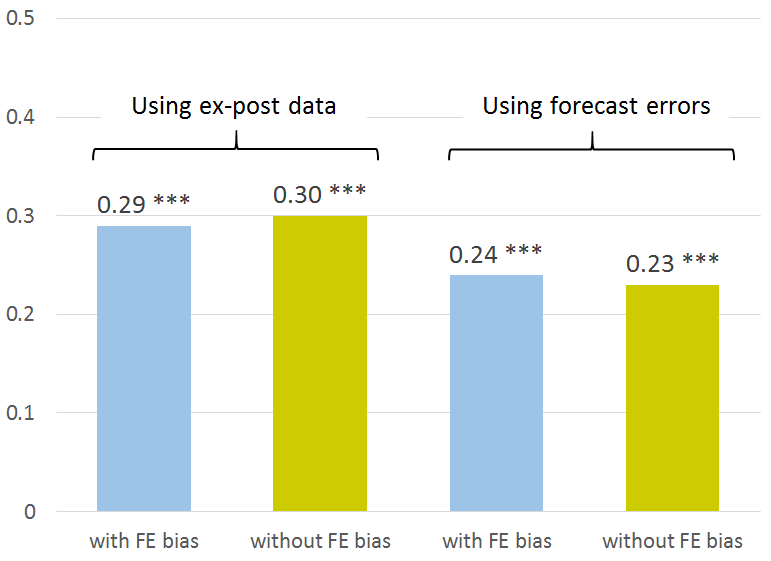 Revisiting the arguments of the real-time data and misinformation literature

For a certain level of procyclicality, decomposing the ex-post observed degree of cyclicality into its predicted and forecast error (or unanticipated) components shows that the only way in which real-time data (i.e., using forecasts) could be less procyclical than when using ex-post data would be if the forecast error component exhibited a systematic procyclical profile. Indeed, this is supported by the data (Figure 3). Through the eyes of the real-time data and misinformation literature, Figure 3 shows evidence that policymakers’ intentions (based on predicted data) are less procyclical than based on ex-post outcomes (once misinformation/forecast errors are also considered). If policymakers truly make decisions solely using predicted/forecasted data, it is unclear why we observe a systematic relationship between government spending and unanticipated output fluctuations (i.e., output forecast errors). Shouldn’t it be zero?

Figure 3. Correlations between growth rates of government spending and GDP. 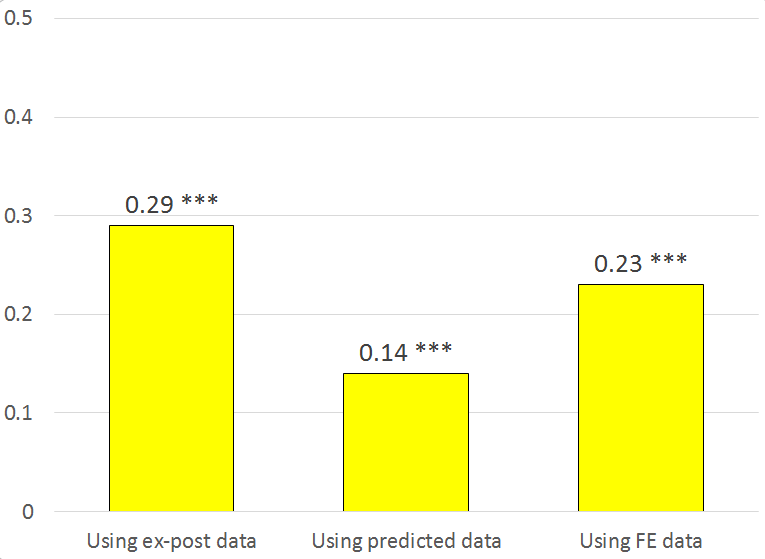 Wouldn’t it be more reasonable to think that fiscal policy is somewhat formulated using predicted/forecasted (i.e., real-time) data and that it is also revisited taking into account new developments in the state of the economy? Under this alternative view, then, one could rationalize a positive association between government spending and output forecast errors via traditional political economy arguments in which spending increases when there is unexpected “manna from heaven,” so to speak (i.e., forecast error is positive), and/or spending decreases as policymakers realize that output growth (and most likely fiscal revenues) was overestimated (i.e., forecast error is negative). Through these eyes, there is no reason to accept the interpretation that forecast errors (or misinformation) have “unfortunate” systematic effects on fiscal procyclicality.

To further substantiate our skepticism about the idea that unanticipated output fluctuations (forecast errors or misinformation) have “unfortunate” systematic effects on fiscal procyclicality, we show that the country degree of observed fiscal policy cyclicality based on output growth forecast errors is strongly determined by traditional political economy and institutional arguments (much like when using predicted/forecasted/real-time data) (Figure 4). 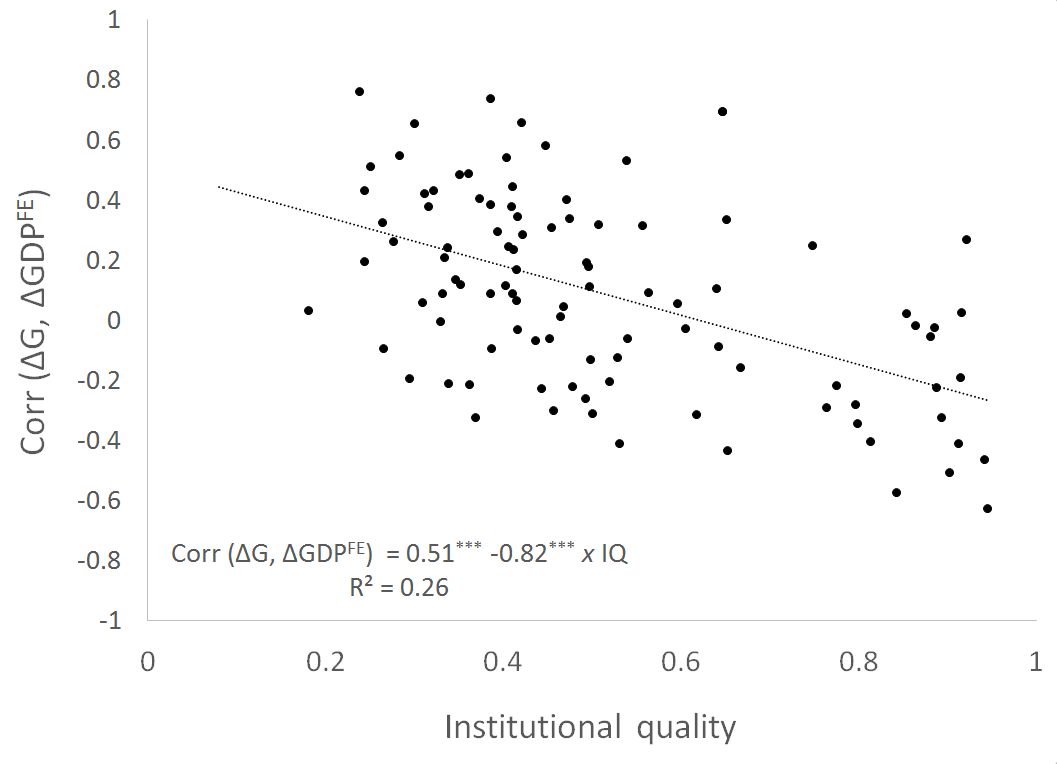 Hence, what seems to be key in driving fiscal procyclicality is not the inherent presence of unanticipated output fluctuations or the degree of over-optimism but, rather, how governments handle unforeseen output fluctuations. In the presence of political economy distortions and weak institutions, both bad and good shocks are poorly managed. However, governments with strong institutions and a high degree of accountability can handle unanticipated developments in their economies in a way that is perfectly consistent with macroeconomic stabilization objectives.

In other words, while improving the ability to forecast output and reducing over-optimism seem to be absolutely crucial—especially in terms of long-term fiscal sustainability—efforts aimed at improving government effectiveness, increasing the quality of bureaucracy, supporting the independence of governmental branches, and the design of a political structure that aim at reducing the inherited “voracity effect” tendencies seem to be at the core of solving the procyclicality puzzle.[1] One need not be so forgiving of interpretations that rely on forecast errors and their “unfortunate” systematic effects on fiscal procyclicality. When making spending decisions, policymakers may be hopeful, but they are certainly not naïve.

Editor’s note: The opinions expressed in this publication are those of the authors and do not necessarily reflect the views of the Brookings Institution, Inter-American Development Bank, its board of directors, or the countries they represent. This piece was originally posted in Spanish on VoxLACEA in February 2015.

[2] When focusing on taxation policy (i.e., using tax rate data), Vegh and Vuletin (2012) also found that procyclicality has also been the historic norm in the developing world.

Forni, L., and S. Momigliano, 2004, “Cyclical sensitivity of fiscal policies based on real-time data,” Bank of Italy Working Paper No. 540.

Golinelli, R., and S. Momigliano, 2008, “The cyclical response of fiscal policies in the euro area. Why do results of empirical research differ so strongly?” Bank of Italy Working Paper No. 654.