Despite the U.S. government’s latest report on the state of its financial health, it’s too early to claim victory.

The Congressional Budget Office recently put out new budget projections and commentators have had a series of feel-good moments about it. Debt is under control, they say. Projections of Medicare costs continue to fall, they point out. The CBO’s estimates of future interest rates, and hence interest payments, have come down as well, they echo. Amidst all of the congratulations, it is worth pointing out two facts that might give one pause in claiming “victory” in the deficit wars.

First, the overall debt level is already high relative to historical norms. At its current level of 74%, the ratio of federal debt-to-GDP is at its highest ever, except for seven years around World War II. At that time, the debt ratio peaked at 106% at the end of the war and then fell rapidly, due to low interest rates, inflation, and a generation’s worth of strong economic growth that we can only hope to see again anytime soon.

Now, however, the debt-to-GDP ratio is not projected to fall. It is projected to creep up slowly over the next decade and then more rapidly in the future. It used to be the case that people worried about whether the debt would increase to high levels – like 74% of GDP. Now, we have arrived there. Before the Great Recession, even with the major tax cuts, new entitlements, increased domestic spending and the expanded military operations of the Bush administration, the debt-to-GDP ratio was just half as big as it is now.

It is interesting that many people who thought former U.S. president George W. Bush’s agenda was unaffordable back when the debt-to-GDP ratio was half as big as it is now feel that a ratio of 74% is nothing to worry about as debt is predicted to rise further.

But higher deficits, as the CBO reminds us, will crowd out investment, reduce economic growth and reduce the increase in living standards for the population as a whole. More generally, if sustaining a high debt-to-GDP ratio were politically and economically costless, one would have seen many more countries, before the Great Recession, in high net debt territory. After all, countries could spend more and cut taxes with impunity if the debt-to-GDP ratio didn’t matter. In fact, very few were above 70 percent. It is not a good place to be historically nor comparatively.

Second, the current projections of the deficit could prompt unwarranted complacency because they reflect both an improving economy and underlying spending and revenue trends. The figure below shows the CBO’s baseline projection that deficits are basically flat at just under 3% of GDP over the next five years, then rise slightly. 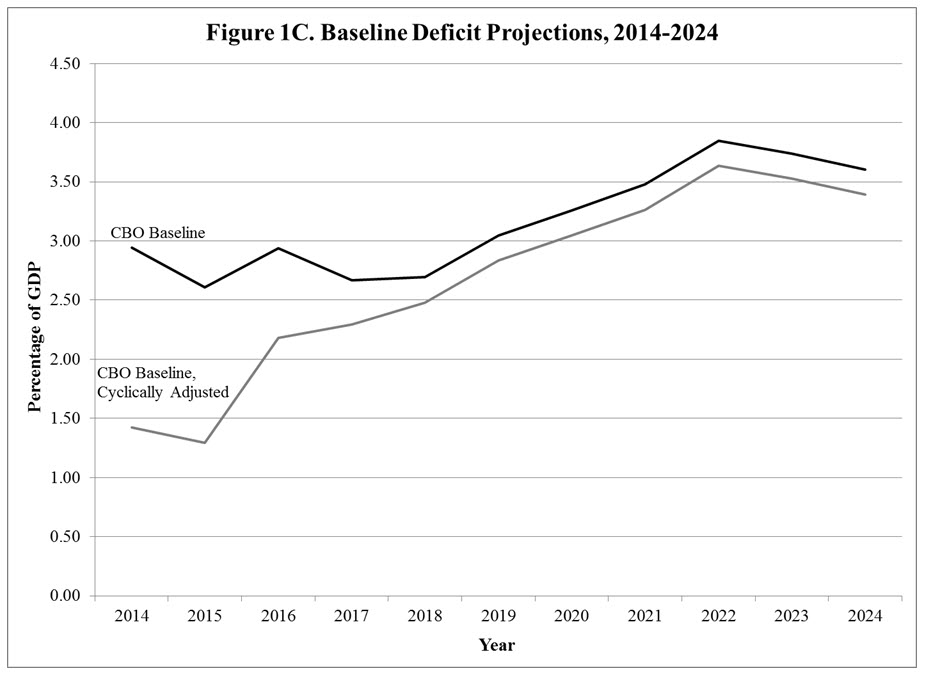 As shown in the figure, the cyclically adjusted deficit is projected to rise sharply over the decade, from about 1.5% of GDP this year and next to more than 3.5% in the out years. (Under a more realistic alternative fiscal scenario, the cyclically adjusted deficit rises to about 3.8 % of GDP in the out years.) A full employment deficit of 3.5% of GDP is serious — the highest since 1990, when policy makers saw deficits caused Bush to violate his own “read my lips, no new taxes” pledge and led lawmakers to enact a deficit reduction package and significant budget reforms.

Long-term fiscal policy is not a crisis. It is not even the most important issue facing the economy this moment – strengthening the recovery is – and the fiscal situation should not stand in the way of changes along those lines. Deficit projections have come down the last few years and are subject to uncertainty.

But don’t confuse these points with claims of victory in the debt wars. There is still a long way to go and a lot to gain from dealing with fiscal policy choices – in the right way at the right time.