In a town so accustomed to polarization, today’s consensus at the Fed for a major change in monetary policy was remarkable. As Ben Bernanke put it, “The basic ideas are broadly espoused inside the committee.” Although it will be five years before we get to see the transcripts of this week’s deliberations inside the FOMC, we can get a window onto the shifting views inside the Fed by exploring the economic projections released alongside the FOMC’s policy statement this afternoon.

In addition to its plan to engage in open-ended asset purchases, the Fed also said that it intends to keep its benchmark federal funds rate at nearly zero until mid 2015, extending its previous guidance that rates would likely remain low until late 2014. That consensus about extending its commitment to low rates belies a range of views within the FOMC about the appropriate date for raising rates. Thanks to the Fed’s relatively new communication policy, we now have four meetings-worth of FOMC projections, which include the views of all nineteen FOMC members about the appropriate timing for the Fed to begin to take away the punch bowl. I’ve arrayed the January, April, June and September projections to give a sense of the changing views within the FOMC that contributed to today’s change in policy. 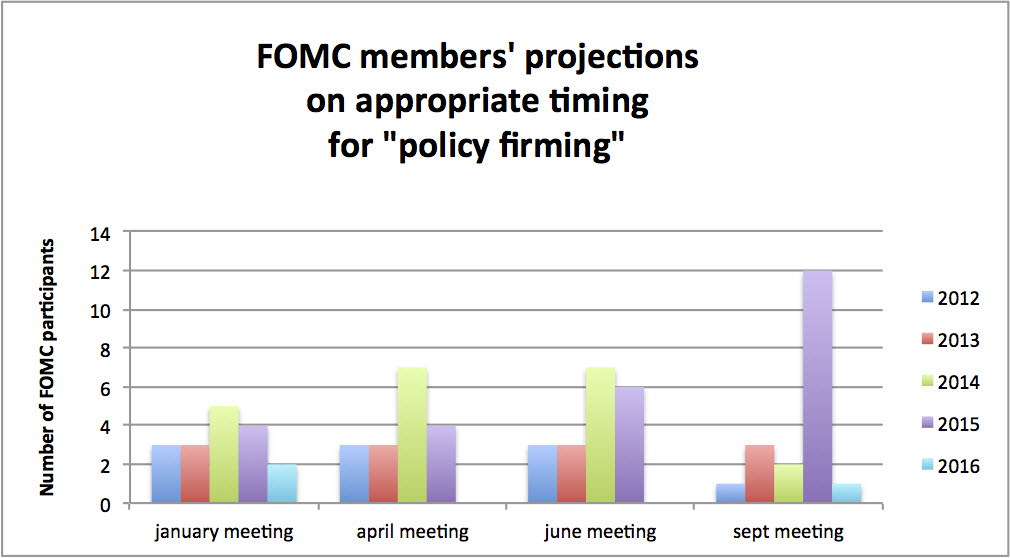 Obvious from the chart is the shift in views within the FOMC that coalesced around the commitment to keep rates near zero into 2015—a marked shift from the previous distribution of views over the course of the year. Clearly, today’s policy change grew in part from the increasingly dovish outlooks of a large majority of the committee. In June, just six members thought raising rates should wait until 2015; today, thirteen members wanted near zero rates until mid 2015 or later. At the same time, the hawkish wing of the committee seems to have had its wings clipped, with just four members still thinking that rates should be raised this year or next.

As students of political institutions, we’d like of course to know more about how and why consensus in favor of a more aggressive Fed policy took root today. But the FOMC doesn’t leave sufficient footprints for us to say much more about the emergence of a supermajority for change. Judging from Bernanke’s comments today though, he waited far longer than a more autocratic chair might have deemed necessary. Indeed, he noted that the consensus across theFOMC was so broad, that “even as personnel changes going forward, this will be seen as the appropriate approach and we will have created a reserve of credibility we can use in subsequent episodes.” That line was probably the most important statement of the day, as it provided a glimpse of Bernanke’s strategy for addressing the intense and continuing criticism of the Fed: Build as deep and broad a consensus for aggressive Fed action, so that the Fed’s audiences will come to concur that the course of action is “appropriate”—even after Bernanke’s term as chair ends. Such confidence might be premature, but it suggests the hard challenge Bernanke has faced in leading the Fed in a polarized political environment marked by pockets of deep distrust of the Fed.

Pandemic Politics: Why Gavin Newsom beat the recall and Ron DeSantis is in trouble

William A. Galston
Thursday, September 16, 2021
Get daily updates from Brookings