With increased global economic integration, shocks that emanate from major economies are transmitted to the rest of the world. In the last four years, African countries have experienced a series of external negative shocks, including the recent global financial crisis that originated from the United States’ subprime mortgage debt fallout. Because of the low level of development and limited integration of African financial markets in the world economy, many experts thought that these nations would not be significantly impacted. To a large extent, African banks remained unaffected. Nevertheless, African economies were severely impacted by the resulting recession in the west following the global financial crisis. The continent, as a whole, experienced a drop in income from exports, tourism, remittances, foreign direct investment and overseas development assistance. This led to job losses and a reversal of declining poverty rates. To mitigate the adverse effects of the global financial crisis, African governments engaged in a broad range of policies in an attempt to halt economic decline and support the return to positive growth trajectories.

This year, however, Africa’s economic recovery is faced with additional challenges arising from continued global economic stagnation, the European debt crisis, the United States’ recent credit rating downgrade, and the continuing unrest in the oil-rich Arab world. These conditions have contributed to uncertainty in the financial markets causing major depreciation of African currencies and inflation. The debt crisis in the eurozone has led to the fall of the euro against the dollar as investors shift away from the risky assets denominated in Euros, to safer assets denominated in U.S. dollars and gold.

Generally African currencies, including some middle-income countries, East African countries and some service-based countries, have marginally gained against the euro in the past three months, but fallen against the dollar. The U.S. credit rating downgrade initially caused African countries with middle income currencies—such as Ghana, South Africa, and Nigeria—to appreciate slightly against the dollar, and then quickly revert back to their previous depreciating trend. Recently, the South African rand has fallen by 3.2 percent due to a reduced demand for commodities in the eurozone. East African currencies of Kenya, Tanzania, and Uganda, continue to experience downward movement, with Kenya’s currency falling by 13 percent, Tanzania by 7 percent and Uganda by 18 percent in the last six months with no signs of stabilizing. Within the West and Central African Coopération financière en Afrique centrale (CFA) franc zones, which are pegged to the euro, currency devaluation echoes the euro’s fall. Currencies in service based countries, like Seychelles and Mauritius, have remained largely unaffected for the past few months, however, they have recently started to depreciate due to the continued European crisis. Rising fuel prices have also affected currencies of net oil importers like the East African countries, thus worsening the volatility. 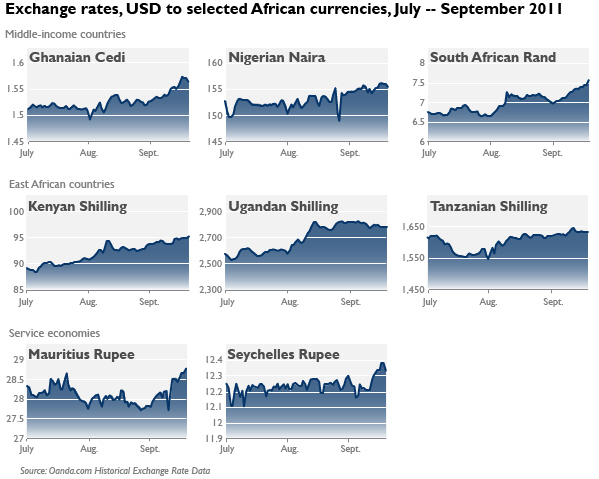 The currency volatility in African economies has not only stemmed from external shocks but also from other domestic factors including drought, political unrest and speculative trading by commercial banks. The accompanying impacts include increased import bills and dwindling official foreign exchange reserves, which result in a shortfall in import cover positions, increased foreign debt holding, and widened trade deficits. The weakening of these currencies has been compounded by the rising inflation in many African countries and limited central bank instruments and resources such as foreign exchange reserves to intervene in the market.

Currency volatility in African countries negatively affects investors’ perceptions of risk in these markets and discourages much needed capital inflows that support economic growth. Central banks, who are receiving pressure from the international community, have attempted to correct this situation by tightening monetary policy to tame rising inflation and stabilize the exchange rate. This however, comes with the risk of undermining short term economic growth, but is expected to benefit long term macroeconomic stability and growth. The success, so far, has been minimal in combating inflation or stabilizing exchange rates as the drivers of the volatility are not primarily monetary. While resource rich countries in Africa, which have been able to use their foreign exchange reserves to intervene in the markets, have been better able to tame the volatility of currency, most African countries do not have large foreign exchange reserves available to implement such policy.

Thus, when a combination of exogenous and domestic factors are the driving force behind currency volatility, an integrated approach that engages government and policy makers is the best option in tackling the problem. A broader framework of policies could involve not only the obvious tightening of monetary policy, but also revising regulatory frameworks to close gaps where speculative trading may occur and utilizing fiscal policy that addresses and smoothes supply side shocks i.e. ensuring reliable distribution/transport/storage of food, and availability of energy and fuel supplies. With a vast number of people living in poverty, it is important that African governments consider broader policies to smooth these shocks, as high inflation, high interest rates and volatile exchange rates are not pro-poor. Furthermore, looking at the spillover effects of neighboring countries’ monetary/fiscal policies upon a country’s current domestic policies could be beneficial for African policy makers. Strategic consultation among central banks and governments in specific regions could help tackle the problem of currency volatility. This effort should be pursued now, especially with current attempts to undertake currency unions in some regions of Africa. Using broad regional based approaches to managing currency volatility will help African economies strengthen their domestic economies and better handle exogenous shocks, improving their progress towards a sustained path of robust economic growth and development.