The devastation, death toll and suffering in Haiti pain us all. With the exception of the tsunami in Asia, the extent of this tragedy is unprecedented for a country not at war. With current technology the scope of human and physical destruction has been immediately transmitted and broadcast globally. Such technology has also facilitated the outpouring of private financial contributions to charity (like the ease by which one can contribute to the Red Cross by texting the number 90999 and typing “Haiti”).

Clear are the immediate emergency rescue and relief needs in Haiti—such as water, food, medical treatment, shelter and emergency power. While precious days may have been lost at first, the international community is now rushing assistance to Haiti, and improved coordination efforts on the ground are beginning to show results. We also know from recent experience that international donors can perform relatively well in emergency relief efforts.

Much less clear is the role of the international community in reconstruction and development in the short-to-medium term. Alongside donor efforts are those of pundits who have begun providing various recommendations brimming with certitude. But perhaps a bit of humility and doubt are in order—it is far from clear what exactly will work (and what will fail) in Haiti in the medium-term. After all, the international community’s approach to development aid in Haiti is far from a success story.

Haiti’s underdevelopment prior to the earthquake cannot be solely blamed on erratic U.S. foreign policy toward the country. Nor should most of the blame fall on insufficient aid funds to the country either. For instance, over the three years between 2006 and 2008, Haiti was receiving official aid to the tune of US $460m. per year, implying official aid of almost US $50 per person per annum. Haiti may have been able to benefit from some additional funds in the past (and there is no question that it will be in dire need of much larger amounts in the coming years), but it was receiving more aid per capita than most other developing countries.

Furthermore, alongside complex external factors affecting the performance of aid funds, one cannot disregard the contribution of internal factors—such as the quality and integrity of leadership and political elites—in conditioning development outcomes. Haiti has had a checkered past.

While Haiti was not a full-fledged failed state prior to the earthquake, it had yet to become a developing country in a real sense. Granted, Haiti two weeks ago was not Somalia, since Haiti did have a government of sorts, which had made some tentative inroads in a few areas over the past decade (such as on ”voice” and democratic accountability). But most of its institutions were extremely weak.  For instance, right now the  media is concerned with the sporadic looting and violence in the capital. Yet similar occurrences, which are symptomatic of dysfunctional institutions (and weak rule of law) were taking place prior to the earthquake.

Underdevelopment was rife prior to the earthquake. Public sector and rule of law institutions were fledgling at best; and dysfunctional at worst. The two comparative charts below illustrate the enormous challenge that Haiti faced prior to the devastating earthquake, for two governance dimensions—rule of law, and government effectiveness. Not shown here is the chart for Control of Corruption, which features a very similar pattern. 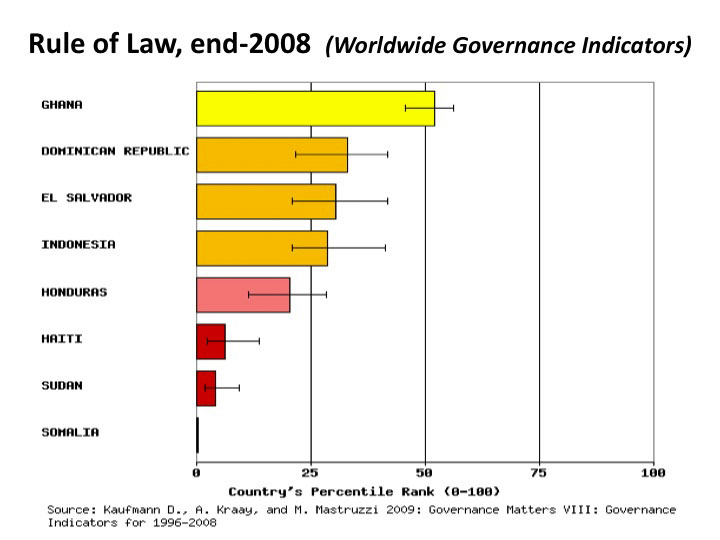 The evidence suggests that prior to the earthquake, Haiti was a mere notch above the failed state of Somalia, and in a number of governance dimensions, close to Sudan. Haiti’s institutional ”performance” was well below developing countries in Central America, which have had to cope with their share of natural disasters. The contrast between Haiti and the Dominican Republic, which share the same island of Hispaniola, is also stark.

Likewise, Haiti’s institutional performance cannot be compared with that of Indonesia, which took the brunt of the tsunami. Therefore, while Indonesian institutions were able to play a key role in the relief and recovery effort post-tsunami, the institutional reality in Haiti likely limits the government’s ability to do the same. So, while politically correct, suggestions that the international community play only a ”supportive role” and funnel relief and recovery funds through the Haitian government that ‘takes the lead’ are likely to be unrealistic and counterproductive. 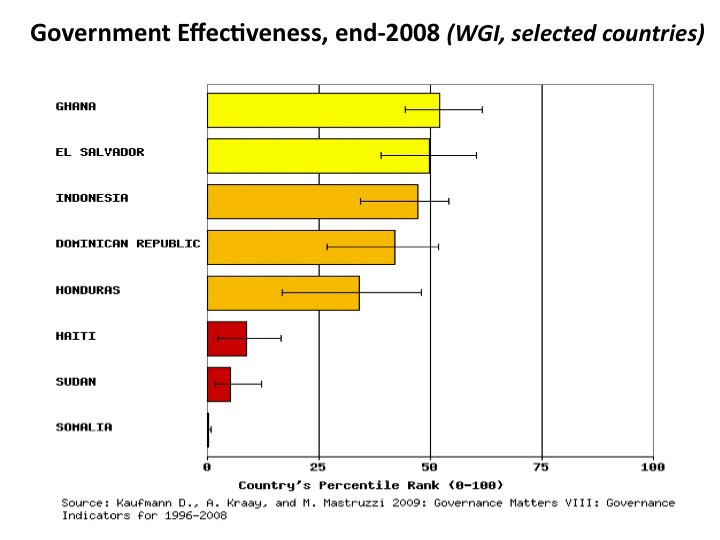 Therefore, the international community will need to be much more involved than usual, for a longer period, and in a more ”hands-on” fashion than warranted in developing countries like Honduras or Indonesia. This does not mean that one country (whether the U.S. or France) or one institution (whether the U.N. or a multilateral development bank) should take full control of relief and recovery efforts.  And it does not mean that Haitians should not take the initiative as much as possible in leading their own recovery and reconstruction effort.

First, the challenges ahead are vast and varied (ranging from security to infrastructure and emergency relief to development), and there is not a single country or institution that could do it all.  Different countries and organizations have different comparative advantages. Second, as the track record of many international donors in Haiti is spotty, a modicum of competition may work out better than a monopoly in the foreign aid effort. Third, the given history and culture of Haiti, it may backfire for one country like the U.S. to take over relief and reconstruction efforts.

And last, but not least, a monopoly would likely concentrate foreign assistance funds and hinder devolution to the Haitian people. While I do argue for realism regarding how much can be expected from the Haitian central government in the near future, the same is not the case at the community level in Haiti. Even in terms of ensuring an orderly and efficient distribution of emergency relief right now, it would be well advised to collaborate much more closely at the community level (and with its leaders) within Haiti.

In the medium-term, following the initial relief effort, the international community has an opportunity to help build Haitian institutions so that the country enters a sustained development path. Consequently, complementing the massive need for food and infrastructure, the medium-term approach to aid in Haiti should consider investing significantly in governance institutions, and in some cases starting from scratch. There is no unique ”right way” of doing this, or one ideal anointed international or domestic agency to carry it out. It will take a number of key players—governmental and non-governmental—from the outside and from within the country. Donor agencies will need to exhibit and promote good governance in aid delivery. The new ICT tools can help in coordination efforts, prioritizing projects, and in involving Haitian civil society.

Further, given the void created in Haiti’s central government in the short term, entrusting its people and communities with major responsibility in the reconstruction process is important. Finally, we should draw the lessons from past mistakes in official aid programs, and factor uncertainty into the design and implementation of future development strategies and projects.

The impact of COVID-19 on industries without smokestacks in Uganda