Just as the American public appeared war weary after years of failed fighting in Iraq and Afghanistan, Americans suddenly favor at least limited military operations against the Islamic State in Iraq and the Levant (ISIL). Opinion polls also suggest public openness to continue the operations and even escalate them if necessary. What explains this turn around in public attitudes? How deeply are Americans prepared to plunge into the war against ISIL?

Conventional wisdom is straightforward: Images of savage beheadings, especially those of American citizens, inclined Americans to want to intervene against ISIL. Lending support to this view are polls suggesting that an overwhelming number of Americans say they have seen reports of these beheadings. But if history is a guide, this explanation is problematic. If it were the ruthless nature of the beheadings that’s the cause of rage, it would be hard to explain why the public opposed President Obama’s call for even more limited attacks against the Assad regime in Syria after he told the nation that Assad had used chemical weapons to kill hundreds of people—with horrific graphic images to support the charge.

If the reason for the public opinion shift is the fact that some of the victims were American, it’s not obvious why this would not incline the public to want the United States to stay out, instead of getting deeper into the fight. In fact, historically, conventional wisdom of the American experience in Somalia in 1990 has been that images of bodies of American soldiers brutally dragged through the streets of Mogadishu were behind the American public wish to pull out.

A public opinion survey I conducted November 14-19 2014 among a national sample of 1008 Americans, fielded by GfK, offers some insights into the public’s mood on ISIL (referred to as ISIS in the survey) and on Syria, suggesting that there is more than ISIL brutality driving public perceptions. (The poll results will be the topic of discussion at a Jan. 8 event at the Brookings Institution’s Center for Middle East Policy.)

Certainly, Americans have come to see ISIL as the biggest threat facing the United States in the Middle East—much greater than Iran or Palestinian-Israeli violence.

Seventy percent of Americans rank ISIL as the biggest threat in the Middle East compered with 12 percent, for Iran, and 13 percent for Palestinian-Israeli violence. But my poll suggests a complex set of public perceptions driving the elevation of the ISIL threat—and a deep worry about plunging more deeply into the ISIL fight.

First, if current efforts to defeat ISIL fail, most Americans say they would still oppose deploying ground forces against ISIL, although a significant minority—41 percent— express openness to more extensive military engagement. But there is a significant difference across party lines that is bound to influence the way the presidential primary debates play themselves out on this issue: A majority of Republicans, 53 percent, say they would support sending ground forces if current efforts fail to defeat ISIL, compared with only 36 percent of Democrats and 31 percent of Independents.

Second, those who are open to sending ground forces do not appear principally motivated by potential threats to vital American interests, or to allies. Principally, the most common justification is that ISIL is seen as an extension of Al Qaeda, with which we are still at war, one that must be finished. ISIL ruthlessness and intolerance is the second justification provided. 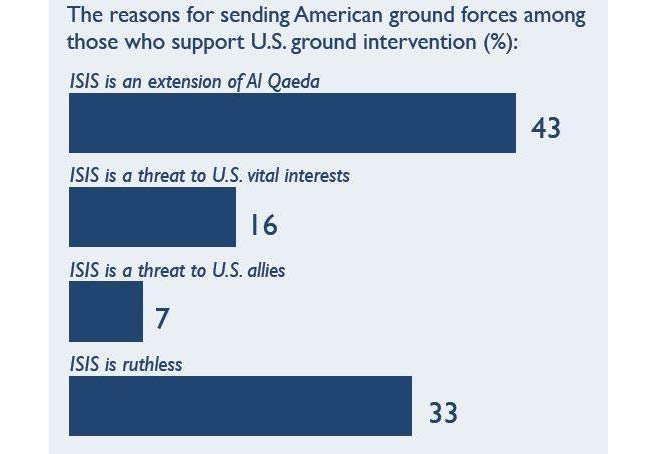 Third, despite expressed opposition by a majority of Americans to deploying ground forces, Americans also harbor strong feelings about the need to confront ISIL. Given a choice between two views, one suggesting that the U.S. should stay out, and another suggesting intervening at the “necessary level,” more respondents choose the latter (57 percent overall, including 67 percent of Republicans and about half of Democrats and Independents). One reason for public ambivalence—wanting the U.S. to intervene at the “necessary level” while excluding ground forces—may be the assessment of prospects of success and failure of intervention. Only 20 percent of respondents say the U.S. can defeat ISIL and assure they will not return. A majority (which holds across party lines) say ISIL can be defeated, but it, or something like it will return as soon as the United States withdraws.

Fourth, Americans are divided on their beliefs about the degree to which ISIL has support among Muslims around the world. A minority, 14 percent believe that most Muslims support ISIL with the rest roughly equally divided between those who say most Muslims oppose ISIL and those who say Muslims are equally split in their support for the group. Interestingly, the more people believe that most Muslims support ISIL, the more they back intervention against it, suggesting that the relationship is not necessarily causal but both attitudes are reflections of ideological positions.

Finally, one outcome of the rise in of the ISIL threat in American public perceptions is that the Iran threat is now seen to be lower. This ranking may have also affected public attitudes toward the Assad regime in Syria: Despite overwhelmingly negative views of the regime—even seeing it to be as bad as ISIL—the public remains overwhelmingly opposed to fighting Assad’s army. One key reason, besides the fear of ISIL, is that Americans do not believe that the moderate Syrian opposition is strong enough to stand up to both ISIL and Assad.

Public attitudes on ISIL are complex with evidence of genuine public concern. But Americans remain reluctant, even hypothetically, to plunge deeper into the fight in part because of a sense that ISIL cannot be completely destroyed. However, significant divisions across party lines, and obvious public ambivalence, may become factors in the upcoming presidential campaigns.

This piece was originally published by
POLITICO Magazine
.