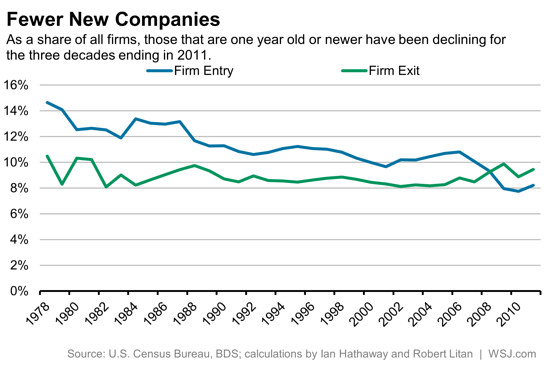 Readers of this blog know of my concern for falling rates of business formation–specifically, the 30-year decline in the rate of start-ups, or the ratio of firms less than a year old to the total number of firms.

My co-investigator, Ian Hathaway, and I have concentrated our worry that a declining start-up rate has contributed to and will continue to dampen growth in productivity, which is the engine of long-term improvement in living standards.

Federal Reserve Chairwoman Janet Yellen recently took notice of the declining rate of business formation in her widely reported speech on inequality. But as my Brookings colleague Richard V. Reeves pointed out, Ms. Yellen highlighted a very different reason to be concerned about the entrepreneurship trends: They have contributed to a decline in economic opportunity.

It is opportunity, after all, that drives the American dream. And those who worry about rising inequality do so in part, or even primarily, because they fear that rising inequality makes it more difficult for those in the middle or bottom of the income distribution, or their children, to rise to higher economic rungs.

Education is one way of doing that, but too many children from families stuck at the bottom are trapped in poorly performing schools and don’t have the same shot at advancing themselves as others from more privileged backgrounds.

Ms. Yellen argues that entrepreneurship offers another way for people to move up the economic ladder. Declining rates of new business formation thus give us another reason to worry about the slippage of the American dream.

Ms. Yellen has provided an additional powerful reason for policymakers, to the extent they can, to begin reversing the long-term decline in the start-up rate.

This piece was originally published by The Wall Street Journal.