Brookings India hosted a panel discussion on “Coal: Are we headed towards an oversupply in 2020?”

1.5 billion tonne target for domestic coal production in 2020: ambitious but unnecessarily so

In FY 2014-15, the government of India announced an ambitious plan to produce 1.5 billion tonne of coal domestically by 2020, an annual growth of almost 20%. The announcement came at the back of the then chronic shortfall of coal. However, by the end of FY 15-16 India’s coal shortfall ended. In fact, power plants–which are the largest users of coal–reported an oversupply of coal, a situation mirrored in terms of power, with plant capacity growth outstripping power demand growth.

The 1.5 billion tonne target was split between Coal India Limited (and other smaller PSU producers) producing 1,000 MT and private (captive) producers contributing the remaining 500 MT by 2020.

Our paper “Coal Requirement in 2020: A Bottom-up Analysis” endeavours to find out the real coal requirement for 2020. For the given target, we have envisioned three sets of growth rates (compounded annual growth rates, or CAGRs) which have been calculated in the paper, the findings of which were released at a Brookings India event recently. The final paper[1] will be made public shortly.

Estimated requirements of coal in 2020:

Scenario 1 – upper bound for coal requirement, based upon power plant capacity: Non-power sector demand was extrapolated based on GDP and elasticity assumptions,[2] and power demand was bounded based on upcoming thermal power capacity (examining all plants under construction, their locations, technology, and status, assuming a plant load factor same as in 2014-15).

Scenario 2 – Offtake based on power demand: Keeping non-power demand the same as scenario 1, a detailed power demand calculation[3] for 2020 led to coal demand estimates based on assumptions on share of thermal generation.

Based on our analysis, which have been detailed in our report, the target and estimates do not align, as shown below (Table 1). 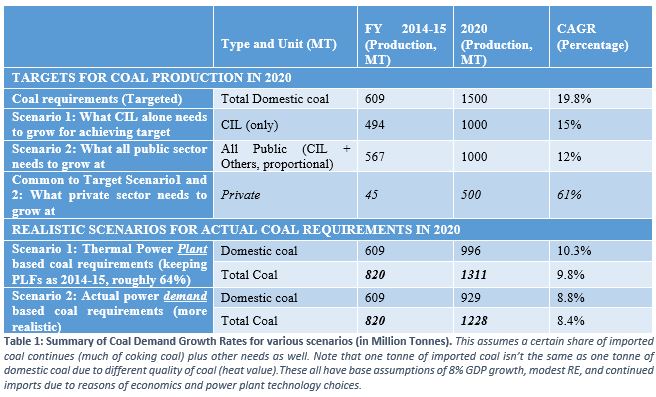 Table 1 shows the base calculations based on assumptions as given (detailed in our report). The capacity based analysis is an intellectual exercise to show an upper bound on the coal required.  Given demand-based projections are lower, these become the bottleneck and provide a more realistic range of coal requirements. If one ignores demand for power, the implication would be further “overcapacity” of power plants, and a fall in PLFs.

All calculations are based on assumptions, and sensitivity analysis indicates what factors matter, and by how much. High and Low demand scenarios indicate a range as shown in Table 2, still lower than the nominal target of 1,500 MT. The ‘High coal’ scenario is optimistic and assumes zero imports of thermal coal (coking coal imports, however, are assumed to continue), a high GDP growth of 8%, 100% electrification with zero load-shedding, and a modest growth of Renewable Energy (with no additional displacement of coal share versus today, which would undershoot the target of 175 GW RE). The ‘Low coal’ scenario assumes a partial improvement in supply quality with imports as proportional to FY 2014-15.

The hand for 2020 has already been dealt: Not as much flexibility in displacing imports for existing/planned power plants as targeted, and high RE targets

Almost 76% of coal is consumed by the power sector, and 79% of electricity generated comes from thermal power, which is overwhelmingly coal-based. Given that coal power plants take years to materialise, we can assume that plants in 2020 are either under operation or already planned if not under construction. Given that boiler technology requires specific coal quality–sometimes fully imported, other times with blending–it is unlikely that imports will be zero by 2020 or even later. Our report details how coal requirements were calculated across plants, factoring in their location, technology, status, etc.

We find that the number of coal power plants under advanced planning or construction is far higher than likely required. This indicates that overall system PLFs will fall even further, or place financial stress on plants. As per Central Electricity Authority calculations and planning estimates, the earlier high PLFs of upwards of 73% are very difficult if not impossible to realise in the coming decade.

Economics would warrant existing plants be utilised to the highest level possible (high PLFs), but the power position in India of surplus at some times in a day reinforces the challenge of peaking power (mostly in the evening). This indicates that coal-based plants, which are baseload plants, aren’t the only need for India’s power sector, and neither is solar power. In addition to not meeting the peak demand, RE also places other system burdens, such as high ramping requirements in the evening (the so-termed “duck curve”). An “optimal” portfolio of power plants is assumption-driven based on the objective function: lowest cost vs. energy security vs. environmental improvement etc.

As an example of sensitivity analysis, Figure 1 shows the impact of different RE capacities on coal demand. This assumes a fixed (exogenous) demand for power, and a 19% PLF for RE. The impact of very ambitious RE targets is modest, in the tens of millions of tonnes of coal per annum. 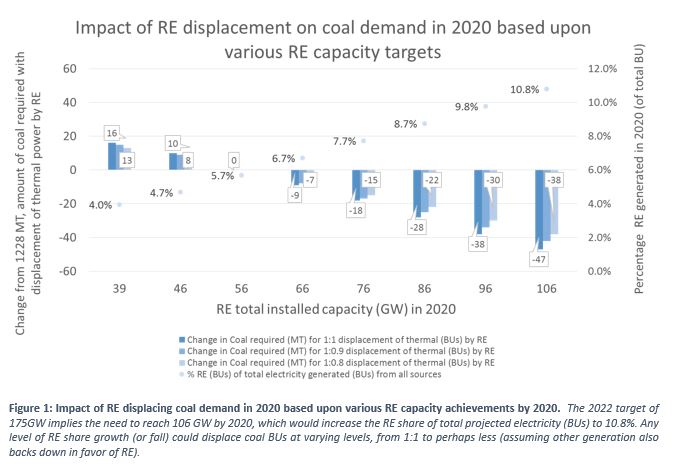 GDP growth rates and future electricity demand are among the key variables or wild cards that can likely pull down the coal requirement compared to the base case assumption of 8% GDP growth and 100% electrification, zero load-shedding, etc. Figure 2 shows the impact of GDP on demand from not just power sector growth but non-power sector growth like for cement and steel industries etc. A 1% (absolute) reduction in anticipated GDP growth rate reduces the coal requirement in 2020 by about ~4%. 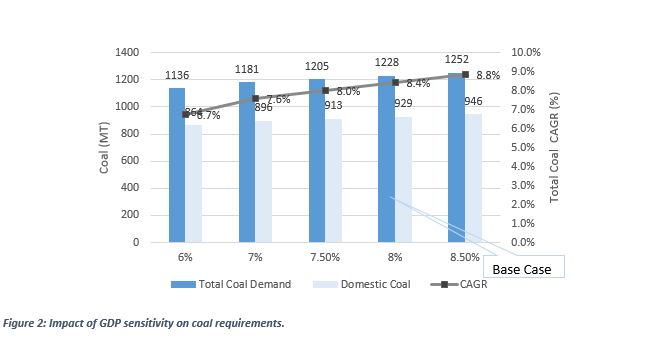 Power demand is a major factor for India’s coal requirement. There are multiple future electricity demand exercises conducted by various organisations, including by the Central Electricity Authority (CEA). In one such exercise, CEA found that the combination of rapid capacity growth in the last few years combined with modest demand growth means a fall in power plant PLFs and/or stranded (if not abandoned) capacity. One possibility is system equilibrium that encourages retirement of older coal plants, on environmental and/or efficiency grounds.

Figure 3 shows the complexity of calculating demand elasticity with GDP.  Higher GDP growth rates indicate a possible lower elasticity, which also cannot be separated from issues of autocorrelation (prior year lows/highs indicate compensation the next year), the impact of the monsoon, not to mention targeted growth of manufacturing.

Other wild cards (unknowns) that could impact coal demand in the future include:

– Imports for both coal and end-products such as steel. These depend on macroeconomic conditions, global prices, etc.

– Growth (or not) of alternative sources of power

– Demand from power distribution companies and consumers. Factors other than GDP based, reforms such as UDAY should help improve the demand for power, but some of this is already captured in the base assumptions on power demand.

– Logistics, especially railways, can be a bottleneck. Also, the costs involved can determine if end-users want to use domestic versus imported coal.

Ultimately, the calculations are for the demand of coal, which still leaves enormous challenges for its supply (i.e., mining). Even the lowered estimates for demand, far lower than 1,500 MT, still leave pressure to perform. Given that the private/captive sector has dramatically higher growth targets for mining and has not grown anywhere near envisaged through 2015-16, this still leaves enormous pressure on Coal India Limited to grow output by 2020.

[1] Please refer to the report titled “Coal Requirements in 2020: A Bottom-up Analysis, by Anurag Sehgal and Dr. Rahul Tongia”

[2] Assumptions for non-power sector include the following: A base assumptions of 8% GDP growth, respective sectoral GDP elasticities and continued imports proportionate to imports in the base year FY2014-15.

Like other products of the Brookings Institution India Center, this report is intended to contribute to discussion and stimulate debate on important issues. Brookings India does not have any institutional views.

Brookings India is hosting a panel discussion on “Coal: Are we headed towards an oversupply in 2020?” and the launch of a Brookings India research paper titled “1.5 billion tonnes of Coal by 2020: Are We Aiming Too High?”

The discussion will explore factors precipitating the recent oversupply of coal at the coal mines and record stockpiles at the power plants.

DISCLAIMER: Photographs taken during the event may be used for non-commercial purposes. Brookings India also shares a brief write-up about the event under Chatham House Rules with its audiences.

If you have any concerns about Brookings India policies of recording and sharing information during and after our events, please contact us.

An audience member asks a question to the panellists

India historically has been skeptical of the U.S. as being unreliable, always attaching strings to relationships with partner countries, and then weaponizing their interdependence.

It's an open question how much this [arms purchases from U.S. rivals] will end up affecting partners like India, but also countries like Indonesia and Vietnam who have these legacy relationships with Russia and are not going to give them up any time soon. In fact, there's an argument to be made that for America's Indo-Pacific objectives, you actually want these countries to maintain and build up a certain amount of military capability, and in some cases the U.S. cannot offer that capability.