Brookings India hosted former U.S. Secretary of State, Madeleine Albright on Friday 12 September at a private roundtable discussion, which was attended by key stakeholders from business, government, and think tanks. The interaction centred on global developments, particularly in the Middle East and Ukraine, the impact of these developments on India’s relations with the United States, and what Washington could do to strengthen its relationship further with New Delhi. 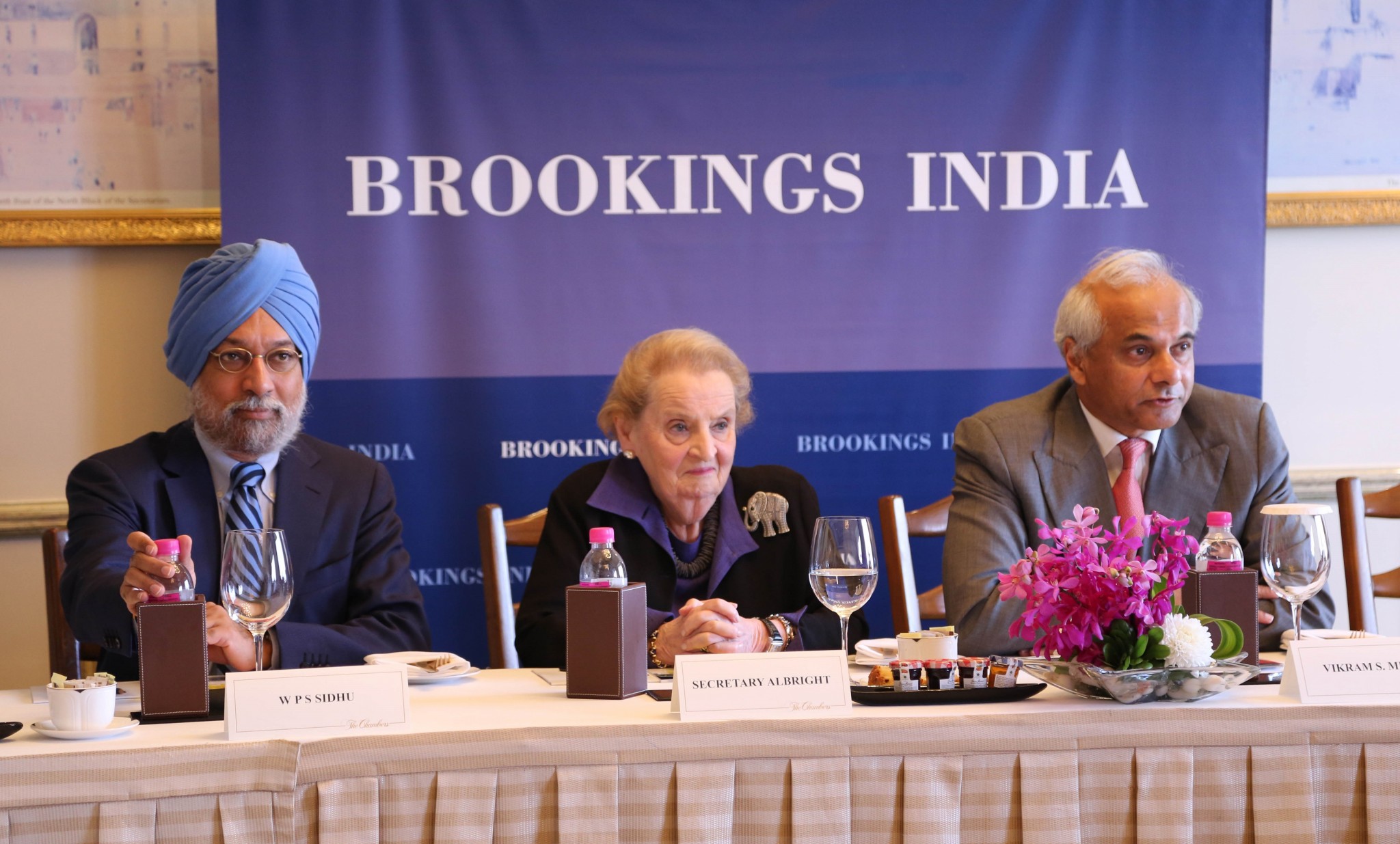 W.P.S Sidhu, Secretary Albright, and Vikram Mehta at the discussion

Two key international trends and contradictions were outlined, in today’s world: globalisation and technology. Globalisation has been a key driving force in the multilateral relations between countries, and has also been attributed as facilitating global trade and economic growth. However, globalisation has become impersonal, with people grouping more and more with their own kind, for example, the European Union. Globalisation is not moving forward in some areas, such as in the free movement of people. With globalisation there is also an increased sense of hypernationalism in some countries, as well as a sense of fear.

Technology has been another key trend which has had unintended consequences. Technology has been a facilitator in connecting the world through the internet. However, this has also led to a disaggregation of voices, especially through the use of social media platforms. People have their own information which they post online, this may or may not be correct information – one such example of disaggregation is the chaos that emerged in Egypt.

Against these twin trends the uprising in the Middle East, ‘The Arab Spring’ and the Russian annexation of Crimea have emerged as game changers for relations between the United States and other key stakeholders, such as India.

While there is a need for India and the United States to be engaging more proactively in and on the Middle East, there is a need to first understand the domestic politics of foreign policy when making policies in relation to other countries and regions. While forum for such cooperation at the global and regional level are lacking (apart from the G-20) there are channels with multilateral organisations to support and endorse the US-India partnership, as well as through Track 2 channels i.e. via business and industry to forge a stronger relationship between the United States and India. Therefore, steps must be taken by the U.S. in demonstrating its true interest in going forward with its relations with India in the matter of the Middle East. Prime Minister Modi’s visit to the U.S. is an opportunity for the U.S. to expand this relationship with more demonstrable action.

It remains to be seen what the nature of the partnership between India and the United States will be like. India’s foreign policy has remained divorced from the global scenario, however, it may change with the new government and become more directly linked.

Africa in the news: Vaccine, energy, and climate change updates