Each year, sub-Saharan Africa loses hundreds of millions of dollars to illicit financial flows (IFFs). In fact, a recent publication by the United Nations Economic Commission for Africa (UNECA) shows that in the last 15 years, the African continent has lost $1 trillion in IFFs. Between 2008 and 2012, African countries represented 16 out of the 25 countries with the highest IFFs to GDP ratio. For instance, in Togo and Liberia, the illicit financial outflows to GDP ratios were 76.3 percent and 61.6 percent, respectively.

With the aim to shed some light on the specific obstacles and potential solutions to illicit financial flows—specifically defined as “money that is illegally earned, transferred, and utilized”—in Africa, on Wednesday, February 17, 2016 the Africa Growth Initiative at Brookings hosted a discussion with former South African President Thabo Mbeki, the UNECA High-Level Panel on IFFs, policymakers, civil society leaders, and private sector representatives to discuss potential areas for action, including “issues related to illicit financial flows, such as taxation, corruption, the function of the corporate sector, and recovery of stolen assets,” all topics that the Panel continued to raise with the U.N. a few days later. 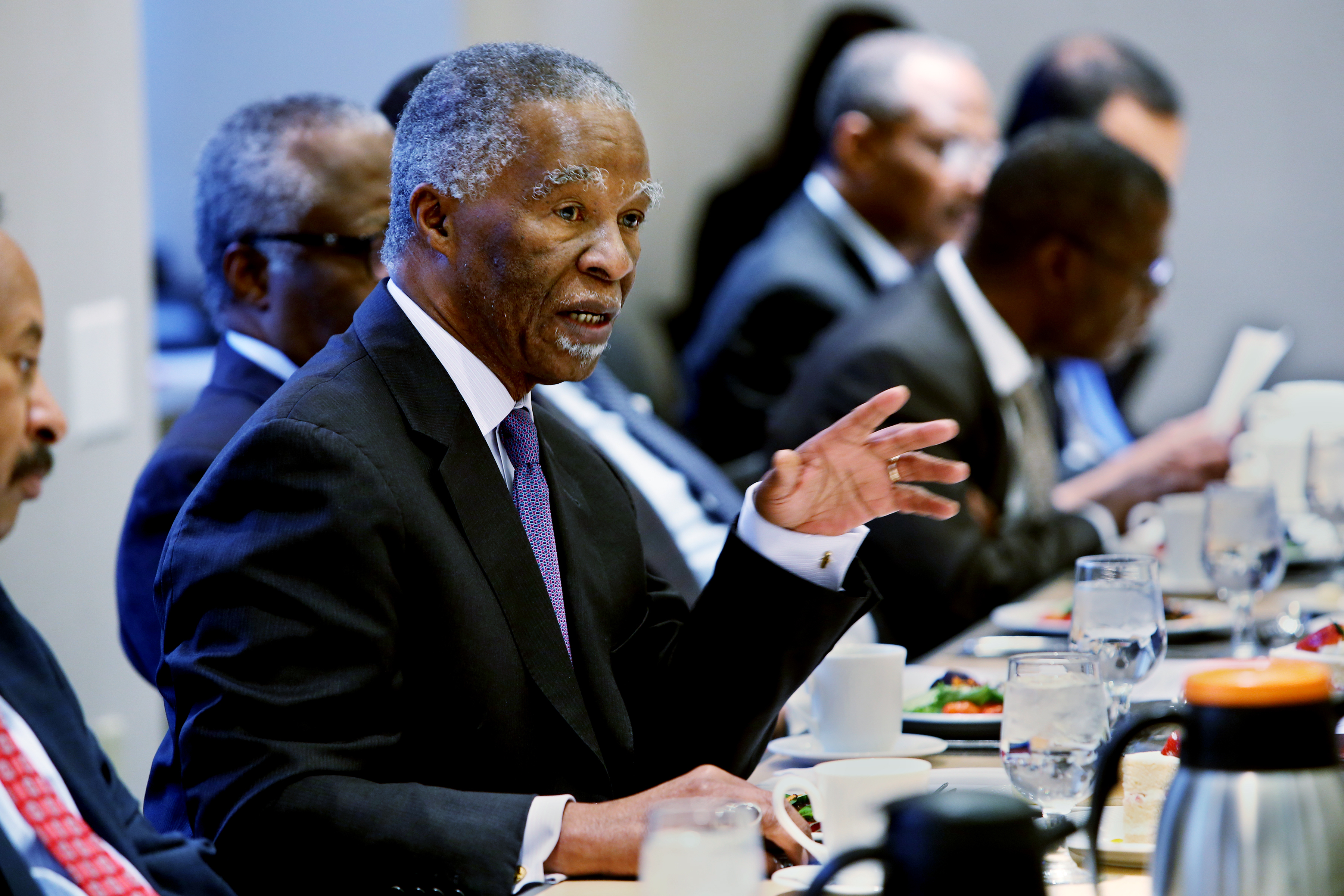 High-Level Panel Chairperson and former President Thabo Mbeki of South Africa discusses some of the findings of the Panel’s report.

Given the energy around the Sustainable Development Goals (SDGs), participants were eager to discuss how fighting IFFs fits in to the new global agenda. In particular, they discussed target 17.1, “strengthen domestic resource mobilization,” under SDG17, “revitalize the global partnership for sustainable development.” The discussants agreed that Africa especially faces many obstacles when it comes to mobilizing domestic resources, which are inextricably linked to IFFs. These obstacles range from weak tax efforts to high levels of capital flight. As IFFs are the biggest hindrance to domestic resource mobilization, noted many, African countries will be unable to achieve the SDGs without curtailing IFFs. Along these lines, as one discussant pointed out, one important solution might be to strengthen the capacity of African countries’ tax administrations, making taxes harder to evade.

“As one discussant pointed out, one important solution might be to strengthen the capacity of African countries’ tax administrations, making taxes harder to evade.”

Another participant emphasized yet another key challenge for curbing IFFs: missing data. As they are not formally recorded, IFFs are hard to track, making it quite difficult to even estimate the magnitude of the resources taken away from domestic resource mobilization.

A regional problem with a global solution

Many of the participants observed that the issue of IFFs, as prevalent as it may be in Africa, is not an Africa-specific problem. It is present in many other developing countries. China, for instance is the largest exporter of illicit capital, with a yearly average of $139 billion, over the last decade. In addition, IFFs are stored in foreign countries—very often developed ones, as one participant noted—away from the countries from which they were illicitly extracted. Therefore, as stated by a discussant, there is a need for a general and global mobilization to exert the pressure necessary to deal with IFFs. Countries alone cannot deal with this issue. As IFFs are stored abroad, recovering the flows requires the cooperation of foreign governments and foreign banks.

“There is a need for a general and global mobilization to exert the pressure necessary to deal with IFFs. Countries alone cannot deal with this issue.”

A related focus of the discussion was the relationship between tax collection and multinational corporations in the region. Too often, many experts said, do multinationals not pay taxes in the countries in which they operate due to the reporting of their revenues in more tax-friendly countries. While this behavior is not illegal, said many discussants, it is extremely problematic for keeping African revenues in Africa. Some suggested that more global regulations could ask multinationals to report profits where the activity takes place. More specifically, some participants suggested the involvement of the United Nations in creating a global legal framework, obliging multinationals to comply with local tax regulations.

“Too often, many experts said, do multinationals not pay taxes in the countries in which they operate due to the reporting of their revenues in more tax-friendly countries.”

Some discussants emphasized that, despite the recent globalization trend, African countries have yet to design laws that specifically include ways to deal with price manipulation or tax evasion by multinational corporations. Therefore, there is a need to explicitly include clauses on transfer pricing and tax manipulation their legislations. 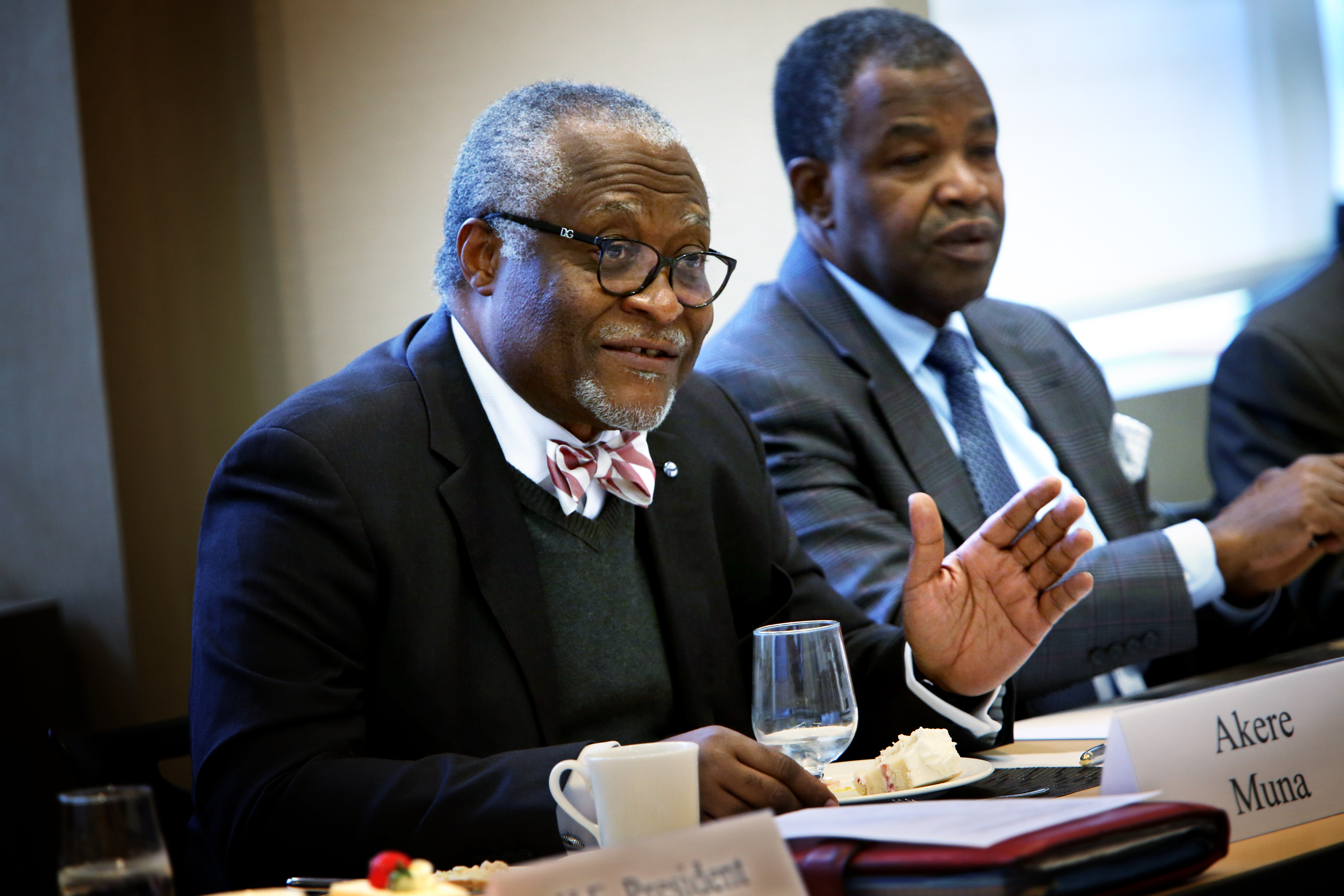 High-Level Panel member and former Transparency International President of Cameroon Akere Muna reflects on the recommendations of the report and potential policy changes on the global level.

The discussion naturally turned to who should lead the decisionmaking process for creating international regulations against IFFs on a global scale, a choice that is contentious. For example, some participants mentioned that during last July’s Financing for Development Conference in Addis Ababa, it was suggested that the OECD handles issues related to international taxation, the task was eventually assigned to the United Nations. Additionally, as it relates to the private sector, many discussants argued that multinationals should not be immune from local sanctions. As one participant suggested, when a multinational misbehaves (i.e., evades taxes or shifts profits) in one country, it should lose its license to operate in other countries. Said regulation would encourage multinationals to implement good practices across the countries in which they operate. The discussion also suggested the creation of an auditing system for multinationals.

In closing, the discussion addressed the important role of civil society. Often, corporations are able to corrupt the government hence the need for civil society to step up. For instance, civil society organizations have provided the High-Level Panel with research output on the prevalence of illicit financial flows in the sub-continent. CSOs are also active in publicizing the problem, thus making citizens more aware of the dangers of illicit financial flows.