European integration has come to a critical point as much of Europe is now afraid to move backward, has no interest in further integration, but also understands that the status quo is economically unsustainable, say Luigi Guiso, Paola Sapienza and Luigi Zinagles.

Although each major step forward in European integration has caused popular support to drop, support for the common currency remains strong, mainly out of fear.

In “Monnet’s Error?” economists Luigi Guiso of the Einaudi Institute for Economics and Finance, Paola Sapienza of Northwestern University and Luigi Zingales of the University of Chicago (currently visiting at Harvard) examine 40 years of polling data to ascertain whether Europe-related crises have generated demand for further European integration or increased skepticism toward the European project. The question relates to the strategy to promote unification envisioned by Jean Monnet, one of the so-called fathers of Europe. He believed that partial steps toward unification would have generated crises that would increase demand for further integration – a “chain reaction” process. 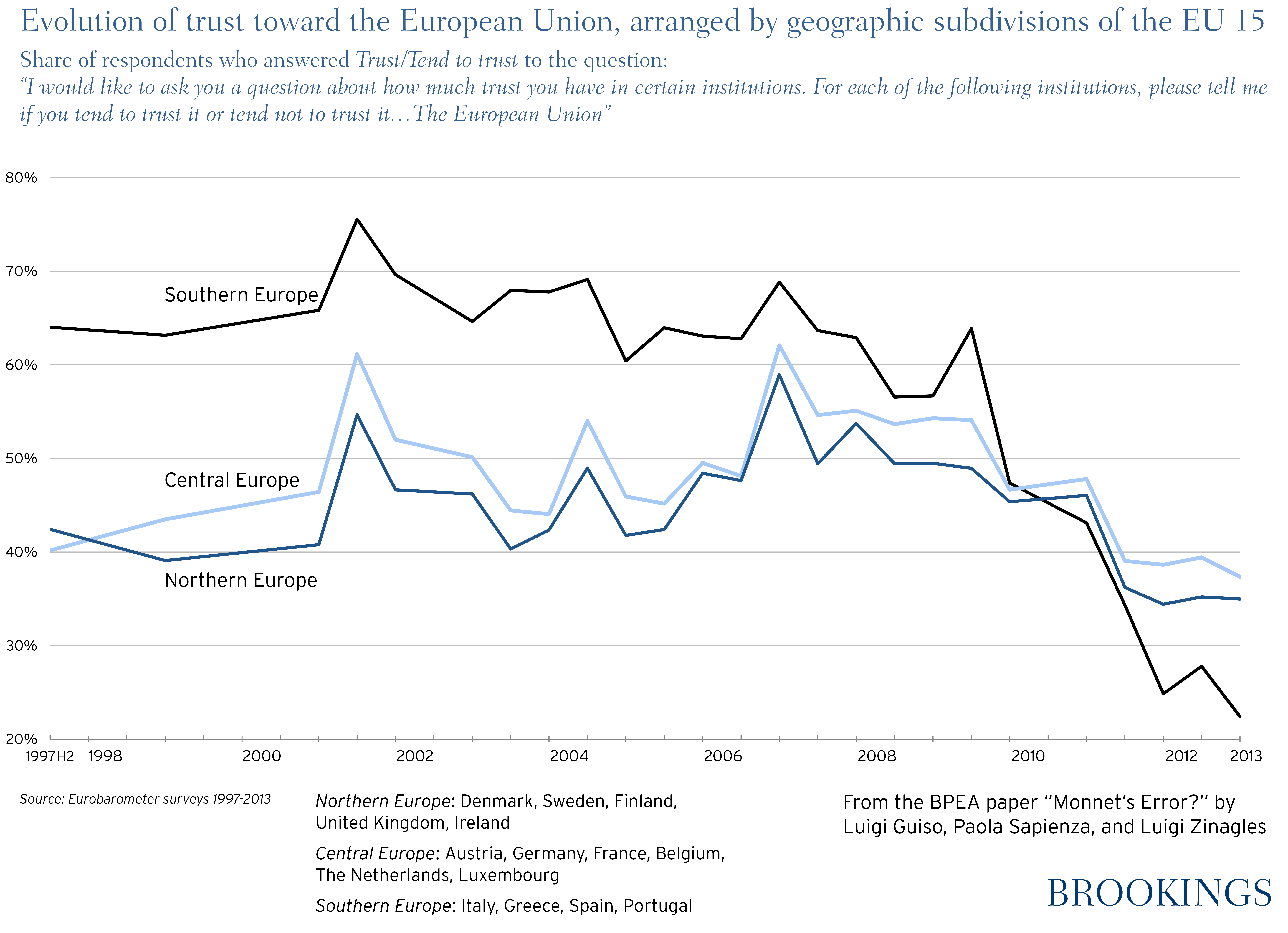 The three economists find that the chain reaction has only partially worked. Now “Europe seems trapped in a catch-22: there is fear to go backward, no interest in going forward, but it is economically unsustainable to stay still,” they write. The polling data show that every time the European project has made a step forward, support for the EU overall has eroded and not recovered. The same occurred during the current Eurozone crisis, although the authors believe the drop is more related to tough economic conditions and could be potentially reversible. A majority of Europeans today think that the EU is going in the wrong direction, they note.

“One possible interpretation of these results is that Europeans like the idea of Europe but dislike the way this idea has been implemented,” they write. “Another possible interpretation is that the attempt to jump start the chain reaction has left the Continent stuck in a political impasse.” Europeans do not want to go forward, but they perceive going backward as too expensive, the authors find. “This interpretation is consistent with the fact that support for the euro has plummeted in EU countries not belonging to the Eurozone, which do not face this irreversibility problem. Thus, one could infer that if it were not for fear of the unknown, even Eurozone countries might be less supportive of the common currency.”

According to authors, Monnet’s chain reaction theory has worked in so far as fostering European integration, but at the cost of a decline in popularity. Monnet’s strategy has a cost: jeopardizing future sustainability, they find.

“Europe and the euro are very costly to revert. As long as the political dissension is not large enough, Monnet’s chain reaction theory delivered the desired outcome, albeit in a very non-democratic way. The risk of a dramatic reversal, however, is real. The European project could probably survive a United Kingdom’s exit, but it would not survive the exit of a country from the euro, especially if that exit is not as costly as everybody anticipates. The risk is that a collapse of the euro might bring also the collapse of many European institutions, like the free movement of capital, people and goods. In other words, as all chain reactions, also Monnet’s one has a hidden cost: the risk of a meltdown,” they conclude.

The Early Impact of the Affordable Care Act