On June 15, the Leonard D. Schaeffer Initiative for Innovation in Health Policy held its inaugural event featuring Senator Ron Wyden and health policy experts from across the political spectrum on the topic of how to reform Medicare to improve care and coordination for Medicare’s chronically ill.

The event comes at a time when legislation on Medicare reform for chronic care may be imminent: over the last two years, a bipartisan working group on chronic care has formed and the Senate Finance Committee has held hearings and published policy options on how best to tackle the changing landscape of health care for America’s elderly.

At the Schaeffer Initiative event, Senator Wyden called for Medicare reforms to support coordination, home health, benefit flexibility, and technology use that could improve care for chronically ill beneficiaries.

Senator Wyden also intimated that the bipartisan working group may release legislation early next year, which could include increased financial support for coordinating care for the sickest patients, greater use of technologies and financial support for appropriate home health care, greater flexibility for supplementary benefits in Medicare Advantage, and ways to support continuing innovation in Medicare.

“The debate about American healthcare is way, way, way out of whack [particularly for] the striking lack of attention to what now dominates American health care: chronic illness.” – Senator Ron Wyden

In Medicare today, health care for individuals with chronic conditions accounts for a staggering share of overall Medicare spending—a significant change from 1965 when Medicare started. In 2012, the Centers for Medicare and Medicaid Services (CMS) published a report detailing the prevalence and impact of chronic conditions (PDF) in Medicare. 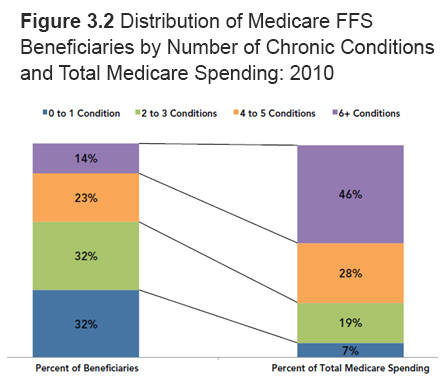 In fact, the expense of a few combinations of chronic diseases drives Medicare spending to an astonishing degree. The four costliest three-disease combinations include beneficiaries with stroke, chronic kidney disease, and either asthma, chronic obstructive pulmonary disease, depression, or heart failure.

Total per capita costs for beneficiaries with these combinations of disease exceed $60,000—seven times that of the average Medicare beneficiary.

Senator Wyden proposed legislation in 2014 that would have established Better Care Plans (BPCs), a variation on Accountable Care Organizations, aimed at improving coordination of high cost, chronically ill Medicare beneficiaries. By requiring beneficiaries to actively enroll in such plans, they offered the potential to better engage patients, as multiple panelists at the event recommended.

Subsequently, in July 2014, the Senate Finance Committee held a hearing on how to address the unmet needs of patients with chronic illness, focusing on experiences of patients, caregivers, payers and health systems that have been involved in care for individuals with chronic disease. The following Finance Committee hearing on chronic care, in May 2015, focused on how to mobilize a plan, with prominent policy administrators and experts Patrick Conway and Mark Miller as witnesses.

Building on this, Senators Wyden and Hatch announced the launch of an on-going, bipartisan working group on improving chronic care for Medicare beneficiaries that released a policy options paper in December 2015 that outlined six key areas of reform.

Four areas of reform discussed at the event

Why the reforms matter

The main purpose for these reforms, as Senator Wyden strongly argued, is to improve the care for millions of elderly and disabled Americans with chronic conditions, and alleviate their suffering. Panelists were in agreement with that goal, but cautioned, however, not to expect huge savings from many of these reforms in the short run, as many improvements require investments in care managers and other infrastructure, but that a reasonable objective would be improvements in quality for similar or slightly lower costs.

The Schaeffer Initiative for Innovation in Health Policy, run jointly by Brookings and the USC Schaeffer Center, will also be releasing a series of policy analyses and recommendations later this year and in 2017, many of which can help inform this legislative process. Schaeffer Initiative work is being completed on Medicare Advantage and delivery system reform, prescription drug payment, and better coordinating post-acute care.