Last week the Obama Administration provided more detail regarding its Precision Medicine Initiative, initially announced during the President’s 2015 State of the Union address. Designed to bolster ongoing advancements in the scientific understanding of human diseases, the effort can broadly be linked to what is more commonly referred to as “personalized medicine” – getting the right treatment to the right patient at the right time. This approach has demonstrated success in recently developed treatments for cancer, Cystic Fibrosis, and other areas with unmet medical need by relying on a clearer picture of the patient’s genetics, health data and medical history. The increasingly sophisticated treatments use this information to target specific genetic aberrations, or other so-called “biomarkers.”

President Obama has specifically requested a $215 million investment, which was included in today’s budget proposal. The funds will be spread among the National Institutes of Health (NIH)—including $70 million to the National Cancer Institute—the U.S. Food and Drug Administration (FDA), and the Office of the National Coordinator for Health Information Technology (ONC). The ultimate goal is to have scientists build better tools and databases by using data from nearly one million volunteers. The data will be studied to develop a better understanding of their genetics and personal health traits to in turn, develop individualized treatments. The data may include information from medical records, lab tests, genetic profiles, and other details such as diet, tobacco use, lifestyle and environment. 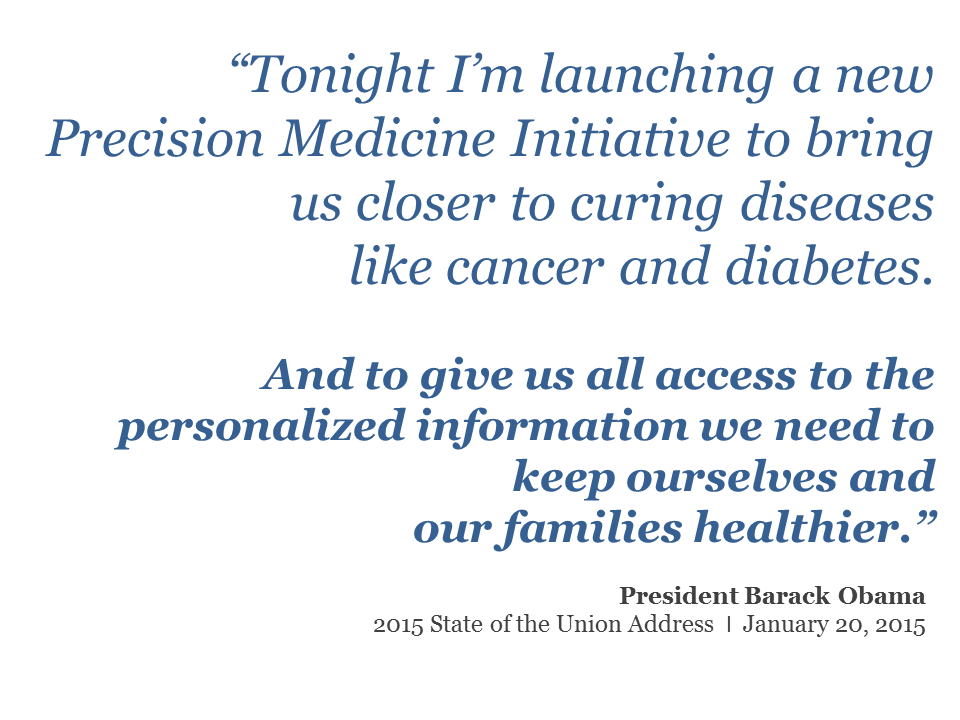 Why is this important?

Enhancing the effectiveness of treatments. Traditional drug development programs have relied on a “one-size-fits-all” approach, which tests drugs for specific therapeutic areas and uses a representative sample of patients with that disease. The promise of increasingly-targeted, precision medicine is in moving beyond that approach by using available science to deliver the most effective treatment possible, while also minimizing the potential for patients to receive unnecessary treatments that do not benefit them.

The NIH funding will enable researchers to further examine patients’ chemical and genetic makeup, as well as their environmental and lifestyle data. This will essentially establish a million-person registry of in-depth data on health and health care. This information could be used by clinical researchers and drug developers to identify targets and create new treatments based on this wealth of evidence. The initiative also identifies cancer as a priority area for developing new genetic targets for improved treatment.

Building on agency efforts and fostering inter-agency collaboration. By engaging the NIH (the engine for advancements in science and understanding of a disease), the FDA (the regulators who ensure that new treatments are safe and effective) and the ONC (who provide oversight of electronic health records), this initiative represents a significant interagency collaboration. It also builds on already ongoing agency priorities, such as FDA’s push to modernize regulation of Next Generation Sequencing, the NIH’s efforts to bring the Common Rule (which protects the privacy and security of personal health data) in line with modern clinical study approaches, and ONC’s ongoing work to improve data standards and meaningful use of electronic health records. The proposed role of the ONC in particular, represents an important acknowledgement of the key role that new technology, data capture, and transparency will play in moving medicine forward. The FDA would receive $10 million to develop databases, and the ONC would receive $5 million to ensure that data is exchanged securely and privately.

Building another piece of the evidence development puzzle. The White House’s announcement promises “strong partnerships with existing research cohorts, patient groups, and the private sector to develop the infrastructure that will be needed” to pursue evidence development in genomics. Such data is just one piece of an increasingly varied evidence development landscape that stretches from data accrued during the early-stages of scientific research and clinical development, to data based on “real world” consumer use and post-market safety surveillance. Developing actionable data in any of these areas requires costly and resource-intensive data collection infrastructures and data exchange mechanisms. To the extent that this initiative and other efforts can encourage investment in data standards, new research methodologies and opportunities to streamline and harmonize disparate databases this is an important investment that is worth making.

The proposed funding and research agenda are a strong step toward improving the genetic and patient history data that can form the foundation of personalized treatments. However, there are a number of further challenges that all stakeholders will need to collaboratively address in order to truly make progress. The data collected must be rigorous, robust and fit-for-purpose, which will require strong methodological standards and guidance from federal agencies, participating academic institutions and stakeholders who are most familiar with the data. The ultimate downstream use of such data for drug development programs will require open and timely access to the emerging databases.

Finally, fully-realized precision medicine is likely to require more than the development of a drug: it will require more comprehensive insurance coverage for the genetic testing that matches a patient to a treatment based on demonstration of real value; it will require improved decision-support tools for patients and providers weighing treatment options; and it will inevitably mean wrestling with the increasingly evident links between highly-targeted, highly-effective treatments and their corresponding high price tags. Taking initial steps to improve the data underlying the development of treatments is therefore a key component of moving medicine forward, but one that will need a collective effort to achieve momentum.