The accused parties in the college admissions corruption case are the parents who offered bribes and the coaches or other staff who took them – as well as the man at the center of the ring, William “Rick” Singer, the founder of a for-profit “college preparation business” based in Newport Beach, California.   But the colleges who were duped need to take a hard look at their admissions philosophy.  All the elements of a great story are here: an FBI sting operation, some celebrities (Lori Loughlin, Felicity Huffman) and business tycoons (casino mogul Gamal Aziz), a series of coaches receiving bribes, photoshopped picture of athletes, fake SAT scores…and lots and lots of money ($25 million in total).   There is much to be said about all this, not least how the scheme simply shines a light on how the whole college admissions game is rigged in favor of those with cash, connections, or both. (See my piece on this, “Dream stealers: How entrance into elite US colleges is rigged in every way.”)  The colleges at which the places were bought are already very skewed in terms of their student body. They all take many more students from households in the top 20% of the income distribution than the bottom 60%. Many take more from just the top 1% than the bottom 60%: 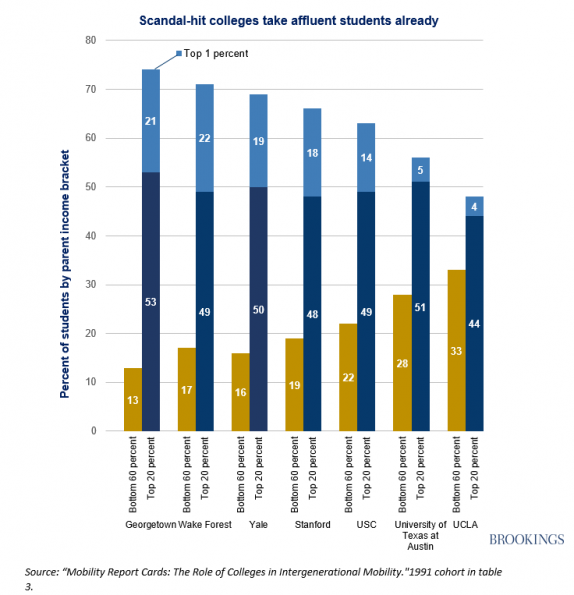