Gauti Eggertsson, Neil Mehrotra, and Sanjay Singh of Brown and Lawrence Summers of Harvard show that uncoordinated expansionary monetary policy in a two-economy model of secular stagnation – a condition characterized by a zero lower bound, low inflation or deflation, and a persistent output gap – results in improvement of conditions in one country at the expense of the other, but expansionary fiscal policy has positive effects across countries. Furthermore, they conclude that expansionary fiscal policy at a time of secular stagnation will result in a lower debt to GDP ratio.

Michael Chernew, David Cutler, and Mary Beth Landrum of Harvard and Kaushik Ghosh of the National Bureau of Economic Research find that, between 1992 and 2008, overall life expectancy in the U.S. at age 65 increased by 1.3 years, while ”healthy life expectancy”—the number of years spent in good health—increased even more, by 1.8 years. The largest improvements in healthy life expectancy came from reduced incidence and improved functioning for those with cardiovascular disease and vision problems, which together account for 63 percent of the improvement. The authors estimate that about 15 percent of the increase in healthy life expectancy is the result of improved medical treatments for cardiovascular disease and about 5 percent is due to greater use of cataract surgery.

Chart of the week: Recovery in the Euro area and Japan has lagged behind that in the U.S. 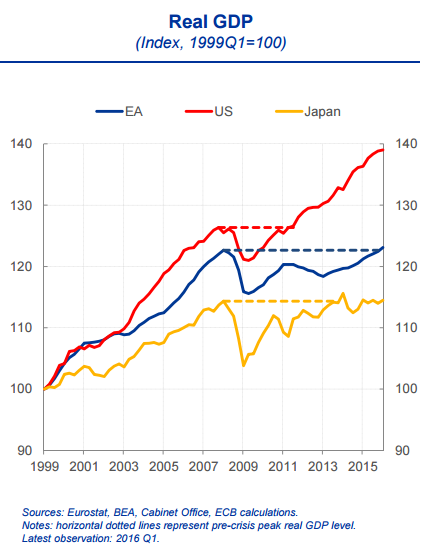 Quote of the week: “I … see no obvious slowdown in the pace or the potential benefits of innovation in America,” says Fed’s Chair Janet Yellen

“There is some evidence that the deep recession had a long-lasting effect in depressing investment, research and development spending, and the start-up of new firms, and that these factors have, in turn, lowered productivity growth. With time, I expect this effect to ease in a stronger economy. I also see no obvious slowdown in the pace or the potential benefits of innovation in America, which likewise may bear fruit more readily in a stronger economy. In the meantime, it would be helpful to adopt public policies designed to boost productivity. Strengthening education and promoting innovation and investment, public and private, will support longer-term growth in productivity and greater gains in living standards.”

—Janet Yellen, Chair of the Federal Reserve Board