Using data on over 100 counties in different states, Rebecca Diamond and Timothy McQuade of Stanford University find that multi-family housing projects funded through the Low Income Housing Tax Credit (LIHTC) raise local housing prices by about 6.5% in neighborhoods with median income below $26,000 and suppress housing prices by 2.5% in neighborhoods with median income above $54,000 and a minority population below 50%. They also find that the introduction of LIHTC-financed projects decreases racial segregation and crime in lower income areas, but does not increase crime in higher income areas.

Monique De Haan and Edwin Leuven of the University of Oslo find that participation in Head Start – a federally funded preschool program in the U.S. – increases high school graduation rates by 3 to 4 percentage points if the alternative is informal care and 2 percentage points if the alternative is a mixture of informal care and some other preschool program. They also find that enrolling in Head Start significantly decreases the probability of being poor as an adult.

Janet Currie of Princeton University and Hannes Schwandt of the University of Zurich find that, while inequality in life expectancy has been increasing for people over 50 years old, it has been declining for infants, children, and young adults. In addition, mortality among African Americans has declined dramatically. According to the authors, these results, along with the observed convergence in smoking rates by income, suggest that mortality inequality among those over 50 will be lower in the future than it is today.

Chart of the week: The Eurozone economy has reached its pre-crisis level 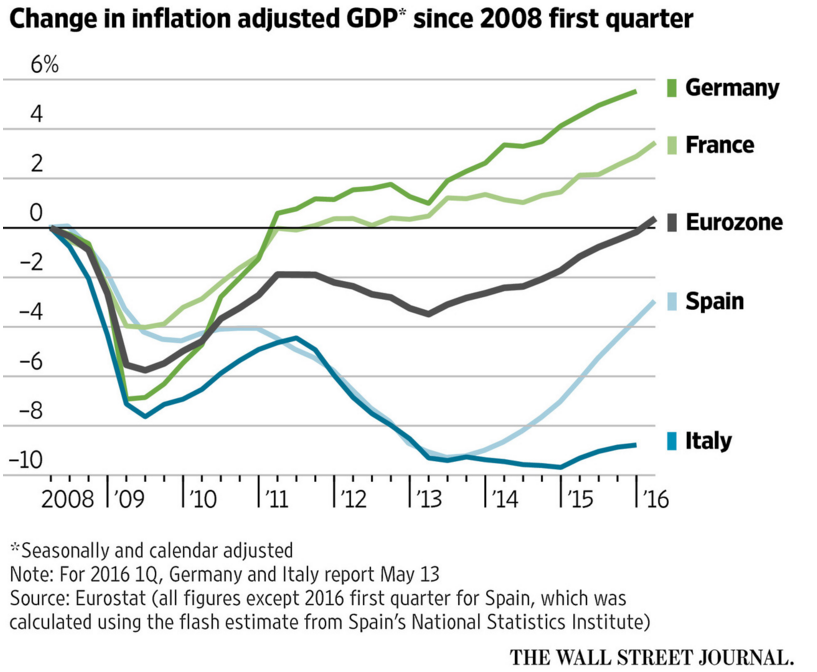 Quote of the week: “We are well aware of the situation for savers,” says European Central Bank official Mario Draghi

“And it’s not only in Germany that people have to face low interest rates. But interest rates are low because growth is low and inflation is too low. Think about the alternative: if we raised rates now, it would be bad for the economy and it would unleash deflation, unemployment and recession. The interest on savings comes from growth, so it is in the interests of savers that inflation stabilizes and growth becomes more robust. Besides, many people benefit from low interest rates as they are also homebuyers, taxpayers, entrepreneurs and workers whose companies are benefiting.”

What does current inflation tell us about the future?