Studies in this week’s Hutchins Roundup find that increased access to Medicaid in states that chose to implement an optional Affordable Care Act Medicaid expansion has improved the finances of affected individuals, federal housing programs minimized economic hardships during the crisis and sped up recovery, and more.

Comparing people living in states that expanded Medicaid with those in states that did not, Luojia Hu, Bhashkar Mazumder, and Ashley Wong of the Chicago Fed, Robert Kaestner of the University of Illinois, and Sarah Miller of the University of Michigan find that, in states that chose to implement the Affordable Care Act’s Medicaid expansion, people living in neighborhoods with the highest percentage of low-income uninsured population before the ACA experienced large reductions in the number of unpaid bills and in the size of debt referred to collections agencies. Specifically, assuming that half of the uninsured with incomes below the federal poverty line gained Medicaid coverage as a result of the policy, they find that an individual who gained Medicaid coverage as a result of ACA saw a decline in their potential collection balance by $600 to $1,000 on average.

Wayne Passmore and Shane Sherlund of the Fed’s Board of Governors find that counties with heavy participation in government-backed mortgage insurance programs provided through the Federal Housing Authority experienced better economic outcomes than other counties, including lower unemployment rates and mortgage delinquency rates. Participation in mortgage insurance programs by Fannie Mae and Freddie Mac also is associated with improved outcomes, albeit to a smaller extent, whereas reliance on banks and private organizations involved in origination and securitization of mortgages is associated with slower recovery than in counties relying on government-backed mortgage programs.

Bank capital regulation has a role to play in monetary policy

Using data on major financial institutions from 14 advanced economies for 1994 to 2012, Leonardo Gambacorta and Hyun Song Shin of the Bank for International Settlements find that a 1 percentage point increase in a bank’s equity-to-total assets ratio is associated with a 0.04 percentage point reduction in the cost of debt financing and a 0.6 percentage point increase in annual loan growth. The authors note that this finding suggests that regulations that require banks to increase their equity can both help ensure bank solvency and help with macroeconomic performance.

Chart of the week: The level of initial claims for unemployment benefits is the lowest since the 1970s 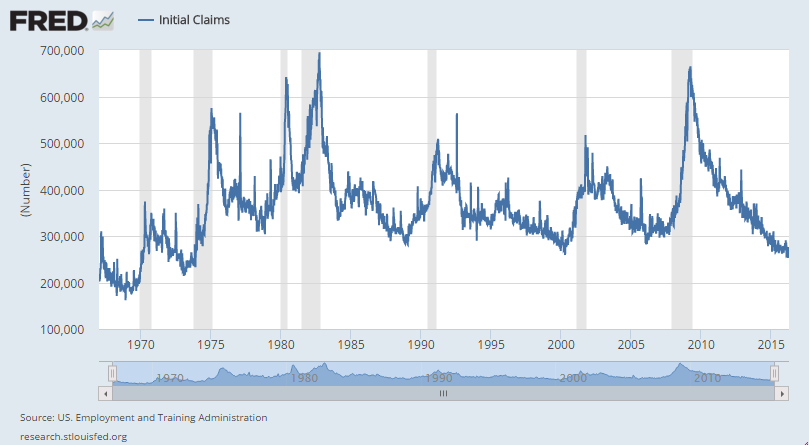 “… [W]e see the recent introduction of negative interest rates by the ECB and Bank of Japan—though not without side effects that warrant vigilance—as net positives in current circumstances. While moving in a different direction, the U.S. Fed’s December decision—alongside its continued commitment to data-dependent actions—also remains appropriate. While accommodation should continue in most advanced economies, it is clear that monetary policy can no longer be the alpha and omega to recovery. Indeed, it will be much more effective with support from structural and fiscal elements…”

Enhancing liquidity of the U.S. Treasury market under stress