Using a novel firm-level dataset on federal procurement contracts awarded to firms between 2000 and 2012, Shafik Hebous of the IMF and Tom Zimmerman of the Federal Reserve Board find that every dollar of federal spending increases firms’ capital investment by about 7 cents overall and by 12 cents if only firms’ largest contracts are considered. They also find that this investment-boosting effect is higher for financially constrained firms and that the federal government spending translates into additional investment and not into investment that would have happened anyway.

Hilary Hoynes and Jesse Rothstein of the University of California, Berkeley find that the Earned Income Tax Credit (EITC) is far better targeted at low-income families than the Child Tax Credit (CTC): nearly 60% of the EITC benefits go to filers with income below $30,000, whereas only 20% of the CTC benefits go to families with incomes below $30,000. Citing a large body of research, they conclude that EITC increases employment among single mothers but modestly reduces the number of couples with second-earners. Finally, the authors point out that these poverty-alleviating and work-incentivizing policy goals would be costlier to achieve if EITC were replaced by public assistance programs.

Financial interconnectedness has increased since the financial crisis

Examining financial spillovers among selected Asian, emerging, and advanced economies, Roberto Guimarães-Filho and Gee Hee Hong of the IMF find that equity returns and volatility are increasingly interdependent, particularly among most Asian emerging economies due to growing intra-regional financial integration. They also find that Asian emerging markets, particularly China, increasingly are sources of financial shocks that spillover to the rest of the world, including to advanced economies – and the authors expect this trend to continue.

Chart of the week: Decomposing the change in labor force participation rate since 2008 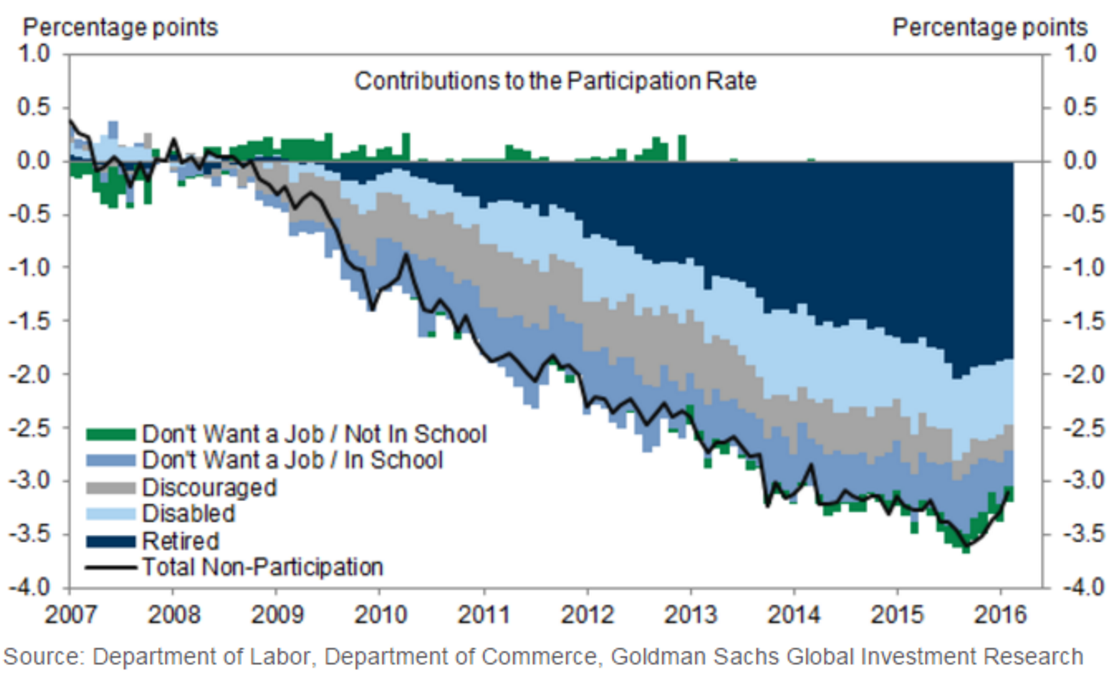 Quote of the week: “If not monetary policy, then what?” asks European Central Bank official Vítor Constâncio

“The sceptics’ reasoning is … that monetary policy is increasingly ineffective in any case… [This] criticism of monetary policy is mostly based on a crude comparison between where inflation (or growth) is now and where it was at the beginning of the policy. The conclusion: inflation didn’t change much, so the policy isn’t working. However, what is rational and essential is to examine what would have happened had the policy not been adopted in the first place. Using several models, ECB staff estimated that, without our policies, inflation would have been a third of a percent negative in 2015 and would have stayed significantly negative throughout 2016, which would mean that we would have been in permanent deflation since last year. This is a significant result.”

What does current inflation tell us about the future?