Analyzing state-by-state Medicaid expansions following the passing of the Affordable Care Act, Robert Kaestner , Anuj Gangopadhyaya, and Caitlyn Fleming of the University of Illinois at Chicago and Bowen Garrett of the Urban Institute find that, among adults with a high school education or less, Medicaid expansions reduced the share of uninsured individuals by roughly 3 percentage points. Importantly, the authors find little to no evidence that these expansions led to a reduction in labor supply.

Increases in corporate tax rates reduce risk-taking, but rate cuts have no effect

Using a panel of 133 changes in state corporate income tax rates from 1990-2011, Alexander Ljungqvist of NYU, Liandong Zhang of the City University of Hong Kong, and Luo Zuo of Cornell University find that, for every 1 percentage point increase in tax rates, firms reduce risk-taking by roughly 2 percent. In contrast, tax cuts have no effect on risk-taking, suggesting that firms find it more difficult to increase risk than to reduce it. The authors note that tax loss-offset laws, which allow firms to share part of the downside risk with the government, reduce firms’ sensitivity to tax rate changes.

Chart of the week: Wealth inequality on the rise 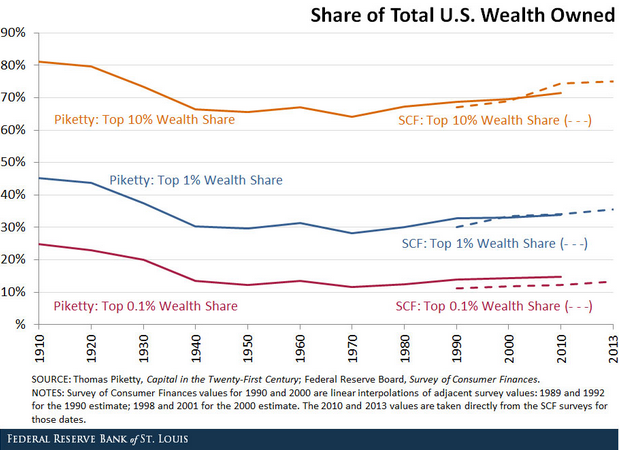 Quote of the week: Fed’s lack of some macroprudential tools could make it more difficult to combat financial instability in the future

Despite the tools that the Fed can use to support financial stability, including the Fed’s authority to impose margin requirements on secured financing transactions, the Fed has fewer macroprudential tools at its command than some other central banks, particularly with respect to real estate. Regulators in many countries facing or anticipating problems with rising real estate prices often turn to controls over loan-to-value or debt-to-income ratios. Such measures are potentially important, as the real estate sector is the most common source of the beginnings of financial instability. In the United States, responding to such problems with these tools would require interagency coordination, which could make their use cumbersome at critical moments.

—Stanley Fischer, Vice Chairman of the Federal Reserve Board

The paper that is the basis for our colleague Ben Bernanke’s 2015 Mundell-Fleming lecture at the International Monetary Fund — “Federal Reserve Policy in an International Context” — is posted here.