What is the natural rate of interest?

The natural rate of interest, also called the long-run equilibrium interest rate or neutral real rate, is the rate that would keep the economy operating at full employment and stable inflation. It is a function of the economy’s underlying characteristics and is not “set” by the Federal Reserve, but in some sense can be thought of as the Fed’s target interest rate when the economy is at full strength. It’s usually discussed in real terms, that is, with inflation subtracted out.

Why does it matter?

It matters because it affects how the Fed steers interest rates. The Fed may temporarily set the benchmark Fed funds rate, the rate at which banks borrow from each other overnight,  below or above the natural rate to stimulate or cool the economy, but will ultimately rely on its estimates of the natural rate to decide the direction rates should go and the level rates should reach. Since households and businesses make investment and savings decisions now based on what they think interest rates will be in the future, the Fed’s views on the natural rate have immediate importance.

One indication of the concept’s significance is the frequency with which it is referenced by policymakers. This year, over half of the 16 FOMC participants have publicly discussed it, including Chair Janet Yellen, Vice-Chair Stanley Fischer, and NY Fed President Bill Dudley. Additionally, John Taylor’s well-known monetary policy guide, the Taylor Rule, is based in part on how far the current interest rate, adjusted for inflation, deviates from his assumed natural inflation-adjusted rate of 2%, chosen because it was close to the 2.2% average annual real growth rate seen over the eight years before the rule was developed back in 1993.  (For more on the Taylor Rule, see this video of a Hutchins Center conversation between John Taylor and Bill Dudley, president of the Federal Reserve Bank of New York.)

However, some doubt the natural rate’s value. In a 2004 speech, then Vice-Chair Roger W. Ferguson, Jr., stated that while it is a “useful aid in thinking about setting monetary policy, it is not measured and observed with such precision as to provide a practical guide to the appropriate stance of policy.”

What factors determine the natural rate?

An economy-wide interest rate is determined by how eager firms are to invest, and how eager consumers are to save, because an interest rate is established when a firm and a consumer can agree to exchange funds at a rate high enough for the consumer to be willing to forgo present consumption, but low enough for the firm to still make a profit on its investment. So the question becomes: What affects firms’ willingness to invest or consumers’ willingness to save?

On the consumer side, one factor is impatience (the “discount rate”). How many servings of baklava would you have to promise to give someone tomorrow to get them to give up one piece today (assuming they were certain you’d deliver)? It makes sense that, as impatience increases, consumers will demand a higher return before they’re willing to save their funds. And if there is risk you might not fulfill your promise, then the more risk-averse the consumer, the higher a rate he or she will demand.

Another factor is how much the consumer expects to consume in the future if he or she didn’t save anything at all. If, for example, due to an expected pay raise the consumer anticipates being able to buy lots of baklava tomorrow, this should decrease his or her desire to give up some right now to save for more later. Since how much one anticipates consuming tomorrow depends on one’s future income, and one’s future income depends on how the economy is doing, many economists think GDP growth is a determinant of the overall interest rate. This means that potential GDP growth—growth at full employment—should be a determinant of the natural rate.

On the investor side, an obvious factor is what kind of return a new investment will yield (economists call this the “marginal product of capital”). If there are profitable opportunities, investors will demand funds, and this will push up the interest rate.

Which of these factors is most important?

Economists disagree, but the connection to growth is frequently referenced. For example, Thomas Laubach, who is now director of the Division of Monetary Affairs at the Federal Reserve, and John Williams, who is now president of the Federal Reserve Bank of San Francisco, used the trend growth rate of potential GDP and consumer impatience to estimate the natural rate in their influential 2003 paper, “Measuring the Natural Rate of Interest.”

More recently, some have argued that the link between the economic growth rate and the natural rate of interest doesn’t hold up empirically. If one uses moving averages of the Fed funds rate as a proxy for the natural rate (the idea being that the Fed funds rate will sometimes be above, and sometimes below, but on average close), it doesn’t seem to be strongly related to the pace of growth. Better predictors seem to be impatience and risk (both mentioned above), financial regulations (such as Regulation Q, which capped interest rates on deposits), trends in inflation, and other temporary factors such as the heavy debt of the early 90’s and the turmoil in the early 2000s caused by war in the Middle East. (For more, see James Hamilton et al.’s “The Equilibrium Real Funds Rate: Past, Present, and Future.”) In theory, the long-run equilibrium rate should not be affected by anything temporary, so whether one believes these results depends on how one feels about using average Feds funds rates—which are affected by temporary factors—as a stand-in for the natural rate.

What is the rate?

No one knows, but there are estimates. On the higher side, the Federal Open Market Committee thinks over the “long run” (meaning “five or six years”) it is 1.5%. This number can be found by taking its median long-run projection for the federal funds rate, 3.5%, and subtracting its long-run projection for inflation, 2%. Others believe a “reasonable range” is “between 1 and 2%.” (See Hamilton’s paper.)

On the lower side, Mr. Williams estimated in a recent paper that at the end of 2014 it was -0.2% (but since he’s a voting member of the FOMC, and the lowest real long-run estimate was 1%, he must not fully trust the prediction). But others also suspect it might be below zero: In 2014, three Chicago Fed economists estimated it had been “persistently negative since 2008.”

How has the natural rate been changing over time?

Economists agree that it’s been declining for decades. A look at the general trend of the Fed funds rate shows this clearly. 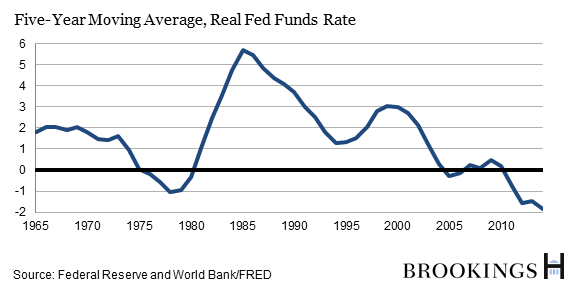 Even over the past several years, estimates for the natural rate have declined. For example, the median FOMC projection of the long-run Fed Funds rate is now 0.75 percentage points lower than it was back in January 2012 when the FOMC started publishing this metric. 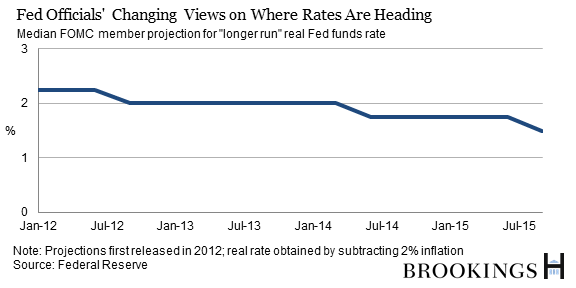 So we know it’s gone down. But as to why it’s declining, and whether the decline is permanent, there’s less agreement. The two primary camps consist of proponents of the secular stagnation view, such as former Treasury Secretary Larry Summers, and proponents of the savings glut view, such as former Fed Chairman Ben Bernanke. Both groups argue that in recent decades desired saving has outstripped desired investment at “normal” interest rates. It used to be that secular stagnationists tended to focus on domestic explanations, whereas the savings glut supporters thought low U.S. interest rates were an international phenomenon. Summers has since acknowledged that the phenomenon is best understood in a global context. (See “Rethinking Secular Stagnation After Seventeen Months.”)

But there remain big differences. Summers believes that saving is outstripping investment because economic fundamentals have changed—in particular, modern business requires less capital to function—and sees low real interest rates as a long-term condition best treated by stepping up productivity-enhancing investments, both public and private. He reads recent interest-rate trends as evidence that the world economy has a chronic disease. Bernanke thinks the excess of global savings over investment has more to do with unwelcome exchange-rate and fiscal policies in other countries, and he doubts that very low interest rates will be as persistent as Summers expects. In an April blog post, Bernanke predicted that if China continued to shift away from exports towards domestic demand, if Asian economies’ build-up of foreign exchange reserves slowed, and if oil prices remained low, then the excess savings from emerging market and oil prices would decline and interest rates would tend to rise. Bernanke also argued that if capital were allowed to flow more freely across borders and exchange rates weren’t artificially depressed by some governments, investment would flow from low-interest rate countries to high interest-rate countries. This would decrease rates abroad and raise them in the U.S. (For more, see Bernanke’s blog post: “Why are interest rates so low, part 2: Secular stagnation.”)

For more on the natural rate, and interest rate trends generally, see the Council of Economic Adviser’s “Long-Term Interest Rates: A Survey.”

Two cheers for the Fed