In his papacy, Pope Francis is powerfully conveying important messages on governance to leaders and citizens of all persuasions, addressing poverty, inequality, and discrimination. In his special address to the United States Congress yesterday—a governance moment—the pope called for tolerance toward immigrants and people of all religious and ethnic backgrounds, and for the abolition of the death penalty. In his recent visit to South America, he spoke about the “gangrene of corruption” in development. He has also been trying to tackle mismanagement and corruption in the Vatican bureaucracy as well as the Vatican Bank. In his address to the United Nations this morning, the pope is emphasizing the importance of rule of law, justice, and addressing corruption, and the misuse of natural resources, which often leads to the exclusion of the poor and vulnerable.

Later in the day, another important governance moment is upon us at the U.N.: the official launch of the Sustainable Development Goals (SDGs), the ambitious successor to the Millennium Development Goals (MDGs) of the past 15 years. To reach consensus and accommodate interests of so many stakeholder interests, the number of goals has increased from eight in the MDGs to 17 in the SDGs (and 169 targets)—even if this raises questions of focus, implementation, and unavoidable tradeoffs between some goals. Yet this time, one entire goal—number 16—is devoted to governance. In this way, the new SDGs explicitly recognize the importance of good governance and specifically aim at advances in democracy, shared prosperity, rule of law, peace, human rights, inclusion, and gender equality.

Much has been made about the success of the original MDGs, particularly advances in poverty alleviation in many countries. Less has been said about the many countries that fell short and the extent to which these shortfalls were related to poor governance—a topic we wrote about here some time ago.

Thus, the new governance goal is an important step forward. It is important, though, that governance is not treated in isolation: Governance performance will be a key determinant of progress on virtually all other SDGs. Success will ultimately rest with what kind of resolute and inclusive (rather than “top-down”) implementation takes place regarding improvements on a wide range of governance dimensions.

For implementation progress, data will be key. This isn’t limited to monitoring: Data will be important for evidence-based decision-making. This point takes us to another governance moment today (even if admittedly less momentous): The release of updated Worldwide Governance Indicators (WGI), part of a research project my former World Bank colleague Aart Kraay and I initiated in the late 1990s.

We have defined governance as the traditions and institutions that determine how authority is exercised in a country. These include (1) the process by which governments are selected, held accountable, monitored, and replaced; (2) the capacity of governments to manage resources efficiently and formulate, implement, and enforce sound policies and regulations; and (3) the respect of citizens and the state for the institutions that govern economic and social interactions.

For each of these three areas of governance we construct two empirical measures for a total of six governance indicators in the WGI, using data collected from dozens of organizations and sources. These sources, in turn, rely on experts, surveys of citizens, and firms around the world. Specifically, we annually assess over 200 countries on i) voice and accountability; ii) political stability and absence of violence; iii) government effectiveness; iv) regulatory quality; v) rule of law; and vi) control of corruption.

Even if politically unpalatable to some, the data is clear: The performance around the world is extremely mixed. Countries like Venezuela, Equatorial Guinea, North Korea, Sudan, Somalia, Zimbabwe, and Libya, among others, are in governance crises. These examples contrast sharply with countries like Uruguay, Costa Rica, Estonia, Botswana, and Poland. In fact, any of these rate well above Greece or Italy in rule of law and controlling corruption, hinting at the highly varied performance within rich OECD countries as well—good governance and anti-corruption are also challenges for richer countries.

The WGI also enables monitoring of governance trends for all countries, and reveals the significant variance of governance over time. Take corruption control:  As a group, rich OECD countries have experienced a deterioration over the past dozen years (see in Figure 1). Among them, nine countries (over one-third) have experienced marked deterioration (“Non-Performing” in Figure 1). By contrast, on average, emerging and developing economies exhibit a slight improvement. However, there is large variation in the overtime trends within such groups. 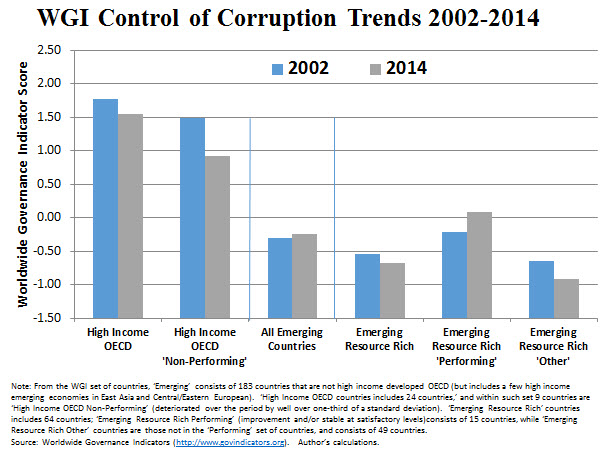 In particular, countries rich in natural resources (oil, gas, or minerals) have not performed well as a group, having deteriorated or stayed stagnant (with low ratings) since 2002 in various governance dimensions. On average, resource-rich countries rate well below emerging and developing economies that are not resource rich. In fact, many of them are afflicted by a “man-made” resource curse.

However, there is nothing predetermined about the resource curse: It is possible for resource-rich countries to perform well and thrive, even if that is far from the current norm. Indeed, as we also see in Figure 1 for the control of corruption indicator, there is a group of about 15 resource-rich countries (comprising less than one-quarter of the group) that has managed to improve over this period or at least maintain satisfactory performance levels.

This is far from a mere measurement exercise—the quality of governance matters enormously. WGI data research highlights the extent to which governance does matter for development outcomes. On average, we found a 300 percent development dividend of good governance in the long run, meaning that improved governance was causally linked to a tripling in per capita income, a one-third reduction in the rate of infant mortality, and a significant increase in literacy rates.

And there appears to be no evidence that resource-rich countries can compensate for shortfalls in governance through commodity windfalls:  The “development dividend of good governance” is likely to be at least as high for resource-rich economies as for other countries, as suggested by Figure 2. The current plight of so many resource-rich countries that failed to implement reforms during the commodity “supercycle” of the past decade, preceding the major ongoing price drop, illustrates this point. 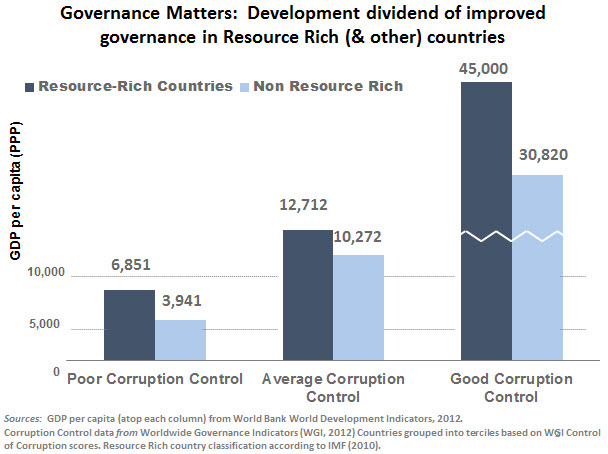 Thus, the governance goal 16 in the SDGs is long overdue and sorely needed for resource-rich countries, among others. The data also points to the need for mutual accountability: The rich world is similarly afflicted by governance challenges, such as the need to address corruption in many governments and multinationals (including a number of big oil companies working in extractives). Fortunately, there are ways forward in terms of approaches to improve governance and control corruption—discussed elsewhere. Here it is worth noting the importance for countries that resource-rich to seize the current moment to implement governance reforms—now that commodity prices are very low, fiscal strains are dire, and citizen discontent with corruption and impunity have grown, applying pressure on the political leadership in many countries.

Listening to the markets

Governance data, such as the WGI and many others, may be telling, relevant, and needed as key inputs to progress on the governance goal in the SDGs. But this doesn’t automatically guarantee that the relevant governance data will be officially sanctioned by the U.N. or member governments because the process related to official use of data on governance is largely political. Indeed, for well over a decade debate in official quarters has taken place regarding use of governance indicators. Meanwhile, the markets have moved on: The risk rating agencies now give significant weight to governance (and use the WGI). It is therefore no surprise that sovereign bond yields align so closely with governance indicators as seen in Figure 3 below, which suggests the extent of the governance risk premia (and a similar pattern is apparent with data on investors’ expected rate of return). 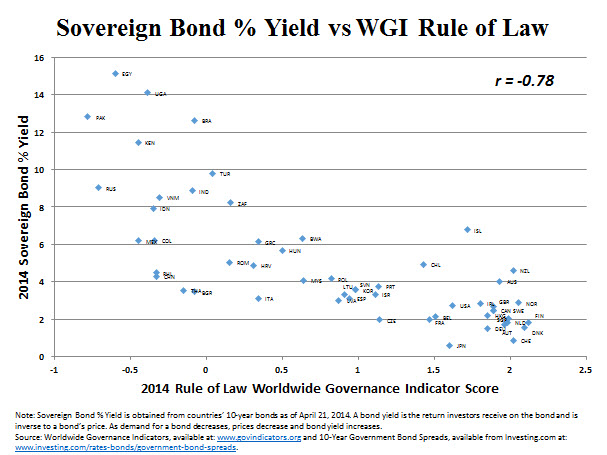 Transparency and precision about imprecision in the data

Constructive critiques of governance indicators should continue to be welcomed, since improvements are always possible, and each and every one of the plethora of governance indicators has drawbacks and is subject to margins of error. Transparently disclosing these drawbacks and the margins of error of each source, which we do with the WGI, already helps, and provides guidance for caution in interpretation and use of the data. Yet the fact that governance indicators do have some challenges doesn’t justify not using them in the SDGs (or elsewhere). It is noteworthy that official statistics and indicators in other SDG dimensions face major drawbacks, yet they are used and have not been subject to the same scrutiny, as for instance, poverty statistics (or even official growth rates) have.

It is important to ensure that governance data continues to be generated and disseminated by many different organizations, independent from governments and official statistics. And in the next stage, it would be welcome for these types of governance indicators to be (judiciously used) by the U.N. and other official bodies and governments, joining what so many already do in academia, think tanks, and the markets. Just as there is a major governance deficit in many parts of the world, there is also still a deficit in the use of governance data. But progress is within reach.

Today, September 25, 2015 the new set of Worldwide Governance Indicators (WGI) is being released and can be accessed at