On September 20th, the Greeks are holding a national election. For once, the rest of the world does not have to hold its breath and wonder if another round of the Euro Crisis is about to begin. Whichever of the two major parties wins, there will be a coalition government with some of the centrist parties, allowing the new leadership to grudgingly follow through on the deal agreed with the rest of Europe this summer. Further, the major opposition party, whichever one it turns out to be, will be committed to the same broad goal. 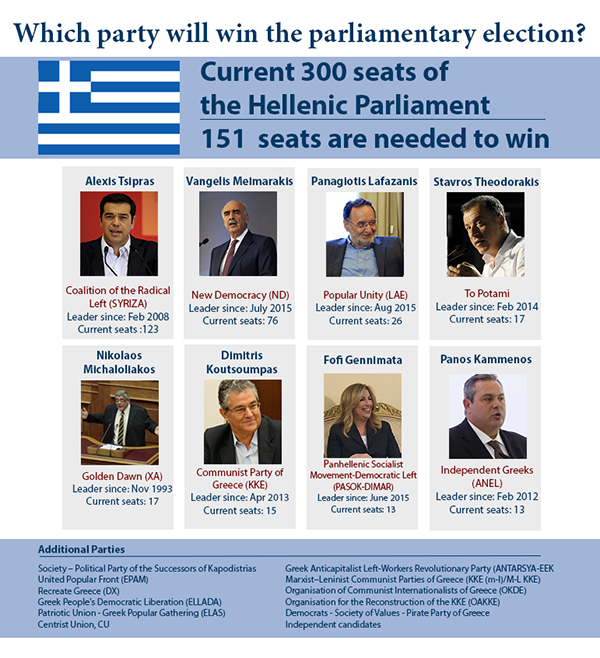 It’s not all calm, of course. The new government is almost certain to try to renegotiate or dodge some commitments and the opposition parties will add pressure by opposing the most politically difficult steps. In addition, the new coalition government could be unstable. But, the key is that a significant majority of the voters and politicians are now clear that Greece has to keep working with Europe. At the same time, there are strong incentives for Europe to keep the money flowing and to find a way to live with the string of further compromises that are likely to be necessary. So, expect both sides to complain a lot and to exercise more brinksmanship, but the worst risks appear to be well behind us. Europe and the Greeks will (and must) find a way to muddle through together.

The big surprise of this election is that voter preferences are running so similar to what they were in the January election that brought the-then radical left Syriza party to power under Prime Minister Tsipras. The difference is that some of the hard left faction in Syriza have split off to form their own party, Popular Unity. They are only polling around 4 percent, making them a fairly insignificant player, except for their siphoning of support from Syriza, which matters a great deal, as the single largest party in a Greek election gets a bonus of 50 seats, out of 300 in total. Syriza and Popular Unity together would beat New Democracy by about four percentage points if they were still one party. This is down from an almost eight point margin in January, but would still put Syriza into power as the core of a coalition. Instead, opinion polls consistently show Syriza and New Democracy, its center-right rival, at almost identical levels.

It’s a coin toss as to whether Syriza or New Democracy will form the next government, in coalition with some of the parties lying between them on the political spectrum. That’s a major surprise, since Tsipras called the election to take advantage of the disarray of the other parties, and to secure an absolute majority in parliament for his Syriza party — minus his most troublesome internal opponents. He, and most observers, expected that Greek voters would give him credit for fighting hard for a better deal with Europe and forgive him for backing down from much tougher earlier rhetoric when it became clear no deal was possible on his terms. Since the parties that traditionally dominated Greece remain somewhat discredited and have internal quarrels, it appeared the prime minister’s gamble was almost certain to pay off. Instead, New Democracy has rebounded somewhat, despite having the uncertainty of being run by an interim leader, and Syriza has largely been unable to draw in new supporters and therefore particularly suffers from the loss of some of its voters to Popular Unity.

No party is likely to come close to an absolute majority, with the largest probably falling 20 or so seats short, even with their 50 seat bonus. Three parties in the center are the most likely partners in a new coalition government. PASOK is the Greek socialist party that had alternated power for many years with New Democracy, much as the Democrats and Republicans have in the U.S.  But it has fallen on tough times and will get only about 7 percent of the vote, enough for about 20 seats. PASOK broadly supports this summer’s deal with Europe. To Potami (The River) is a fairly new party that is centrist, pro-European, and otherwise somewhat hard to define. It may get 6 percent and a bit under 20 seats. The Union of Centrists has been around for a number of years, led by a figure often been disregarded as a crank who constantly attacked the corruption and ineffectiveness of the governments of the day. This year it looks likely to pass the 3 percent threshold to enter parliament, with perhaps 10 seats. It is also centrist and pro-European, albeit with somewhat idiosyncratic views.

Any or all of these three parties could ally with New Democracy in a new government. If Syriza wins the plurality, PASOK and To Potami could ally with Syriza. There are other possible coalition partners, but these are the most likely arrangements for each major party. The common characteristic is that both major parties and all three of the centrist parties want Greece to continue to work with the Europeans on the basis of the summer’s deal. All of them want changes, but none of them appear to be willing to risk a breakdown of the deal that provides necessary funding for Greece. This is why it appears safe to bet on continued progress in the ongoing restructuring process insisted upon by Europe, along with a large amount of complaining and maneuvering and dragging of feet.

In the end, the election may matter a great deal for Greece, as New Democracy and Syriza have strongly different views on many topics. However, it is unlikely to matter hugely to the rest of us.

How to close Europe’s digital divide?

Russia-Ukraine crisis will be an ‘economic and political quagmire’

Douglas A. Rediker
Thursday, February 24, 2022
Get daily updates from Brookings