Public investment provides a boost to the economy

Using data on 17 OECD countries between 1985 and 2013, Abdul Abiad, Davide Furceri, and Petia Topalova of the International Monetary Fund conclude that increased public investment raises economic output, increases private investment, reduces unemployment, and could reduce the debt-to-GDP ratio. These effects are strongest when there is slack in the economy, monetary policies are more accommodative, and the investment is debt-financed.

Using data from 1929 to 2013, David López-Salido and Egon Zakrajšek of the Federal Reserve Board and former Fed governor Jeremy C. Stein of Harvard University find that elevated investor sentiment in credit markets portends an economic downturn two years in the future. The authors note that this is at least partially because higher sentiment is usually followed by lower net debt issuance and higher net equity issuance, reducing the supply of credit, particularly to weak firms.

Chart of the week: Since the start of 2013, 15 states and the District of Columbia have increased or reformed their gas taxes 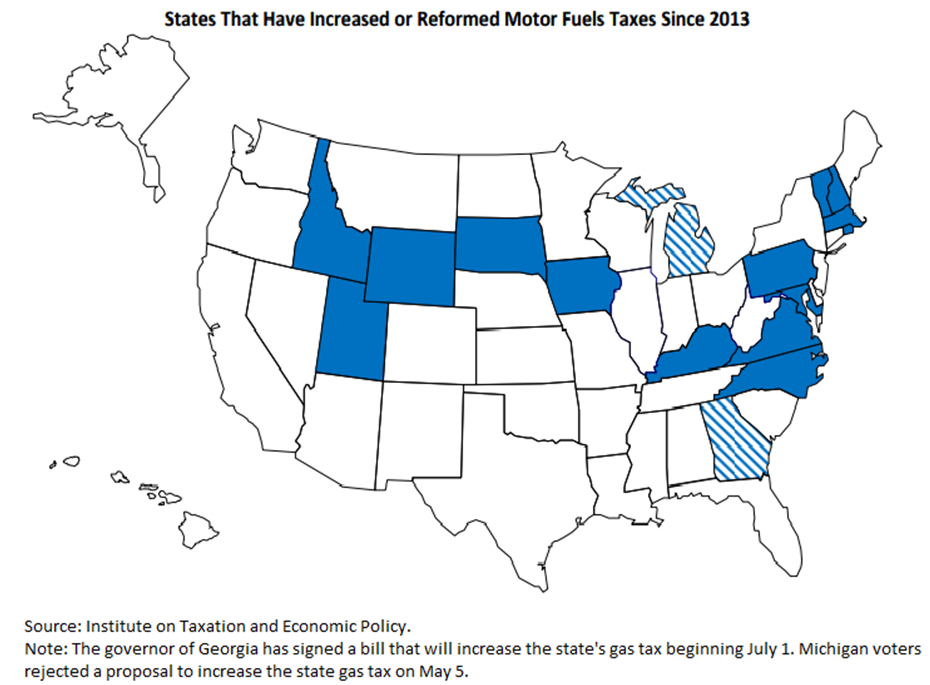 Quote of the week: ECB economy-boosting bond purchases are within its mandate; giving money to households isn’t.

Q. Wouldn’t it have been better if the ECB had simply given a check to households? Then not so much money would have been pumped into the financial system, but would have flowed directly into the real economy.

A. First and foremost, the purchase of securities is an instrument that we can use because it is in line with our statute. There is nothing that controversial about it, but the same cannot be said for your ‘helicopter money.’ Moreover, with our program we are injecting money into the economy. That money will bring about an improvement in market conditions and thereby make it easier for private parties to access financing.

Helicopter money has had different meanings in various contexts, from giving money directly to households to financing of public infrastructure. But all these options would bring us very close to pursuing fiscal policy. And that’s what we cannot do.