The tax system affects all individuals and families in the United States. It is the key source of revenue for government activities, it changes the return to work, and it is increasingly a vehicle for achieving policy goals. As we approach the IRS tax filing deadline of April 15, The Hamilton Project is highlighting several of its recent discussion papers, policy memos, economic facts, and illustrative charts that promote opportunities to strengthen the individual income tax code in order to improve the lives of Americans.

A Dozen Facts about America’s Struggling Lower-Middle Class
(December 2013)
By Melissa S. Kearney and Benjamin H. Harris
This set of economic facts, and corresponding charts, describes key conditions and challenges facing lower-middle-class families. A number of the included facts and figures illustrate how the tax code affects the income available to these families. For example, Figure 9 (below) illustrates how the tax and transfer system changes the distribution of income for working-age families with children. The direct effect of the tax and transfer system is to expand the middle class by compressing the number of families located at either end of the income distribution and raising the number of families in the middle range. Other facts—including Figure 12 (below)—describe how marginal tax rates can be extremely high for some low- and middle-income families as their earnings move them into the range of income where transfer programs are phased out and positive marginal tax rates kick in. 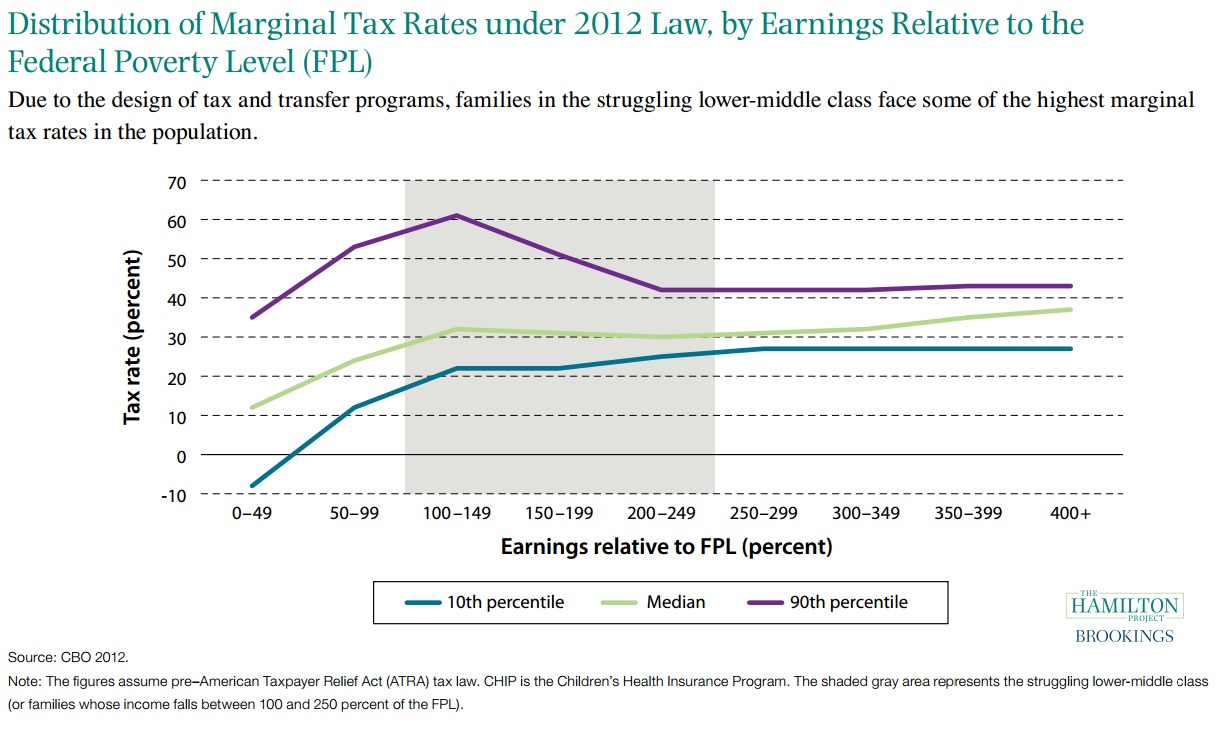 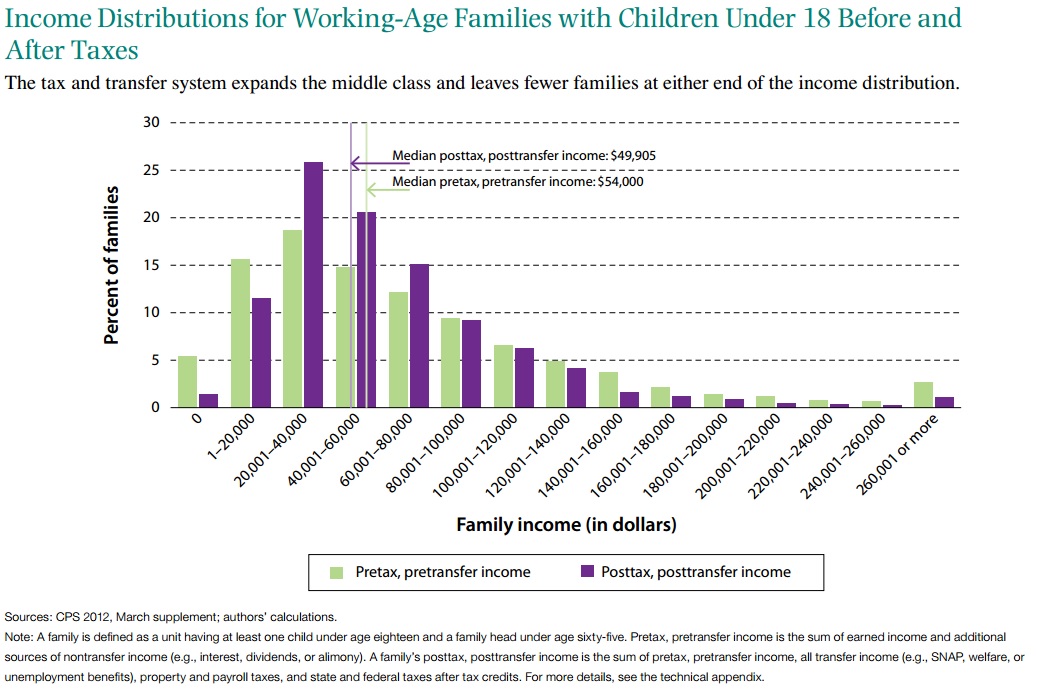 Building on the Success of the Earned Income Tax Credit (June 2014)
By Hilary Hoynes
In this policy memo, Hilary Hoynes proposes expanding the Earned Income Tax Credit (EITC) by raising the benefits for families with one child to be on par with the benefits for families with two children. This proposal aims to strengthen work incentives for low-income, one-child families; raise 410,000 people—including 131,000 children—out of poverty; and increase after-tax income by about $1,000 for one-child EITC beneficiaries, leading to improvements in health and children’s cognitive skills. Note: this proposal is featured in The Hamilton Project’s Policies to Address Poverty in America.

Supporting Low-Income Workers Through Refundable Child-Care Credits (June 2014)
By James P. Ziliak
In this policy memo, James P. Ziliak proposes converting the federal Child and Dependent Care Credit from a nonrefundable tax credit to a refundable one, capping eligibility at an income of $70,000, and making the credit a progressive function of income, child age, and use of licensed care facilities. This proposal, targeted at low- and middle-income families with children under the age of twelve, aims to increase labor force participation, disposable income, and the use of higher-quality child care. Note: this proposal is featured in The Hamilton Project’s Policies to Address Poverty in America. 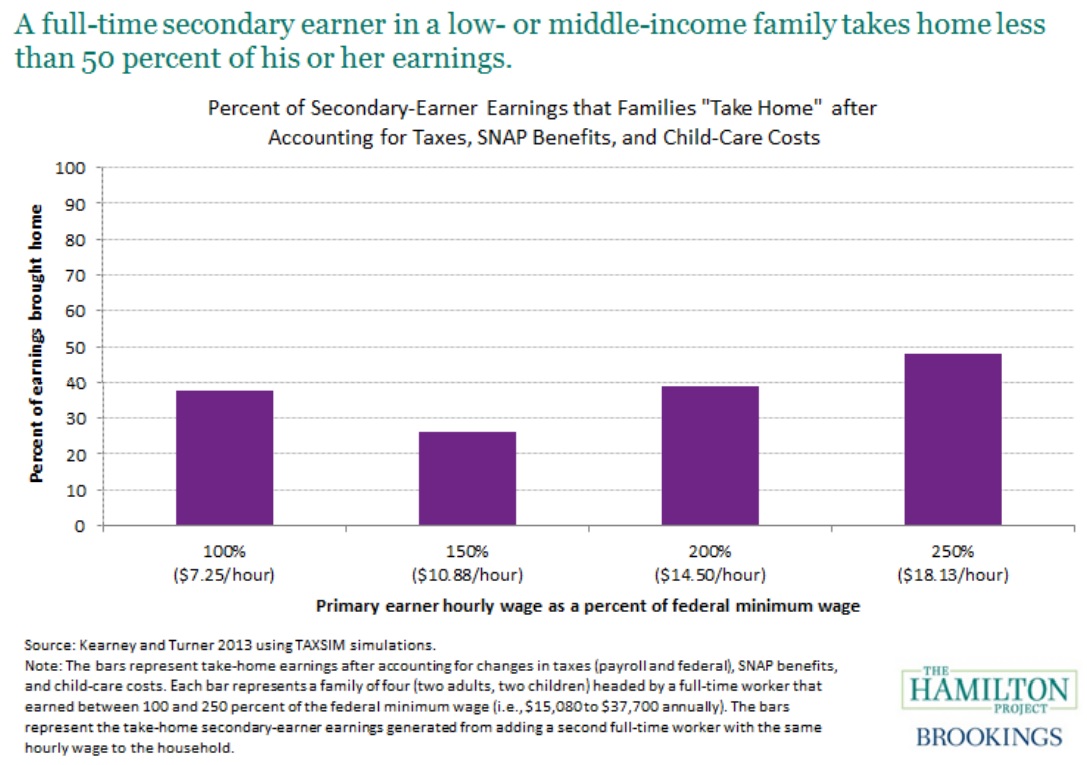 Better Ways to Promote Saving through the Tax System (February 2013)
By Karen Dynan
In this discussion paper, Karen Dynan explores policy solutions to address the dramatic decline of the personal saving rate in the United States over the past several decades. This proposal recommends the design of government incentives for personal savings, outlining how reforms to these programs would improve saving and economic security for low-income households and reduce expensive and ineffective federal subsidies for high-income households.

How much economic income shows up on tax forms?