Eric Engen, Thomas Laubach, and Dave Reifschneider of the Federal Reserve Board argue that the bulk of the effects of  the Fed’s unconventional monetary policies undertaken in 2009 were not felt until 2011, and are still working their way through the economy.  The authors expect a peak unemployment rate reduction of 1.25 percentage points to be reached in early 2015, and a peak increase in inflation of 0.5 percentage point to be experienced in early 2016.

In an analysis of 401(k) saving behaviors for workers employed by a single firm, Kai Yuan Kuan, Mark R. Cullen, and Sepideh Modrek of Stanford University find that, after accounting for income, African American and Hispanic employees were less likely to participate in 401(k) plans, and that, among those that did participate, African Americans tended to contribute a smaller share of their income. Hispanics and African Americans also tended to favor safer assets and were more likely to draw down on their 401(k) accounts. The authors suggest that together, these tendencies have a significant impact on wealth accumulation.

Chart of the week: Homeownership among 25 and 30-year-olds continues to decline, share living with parents remains elevated 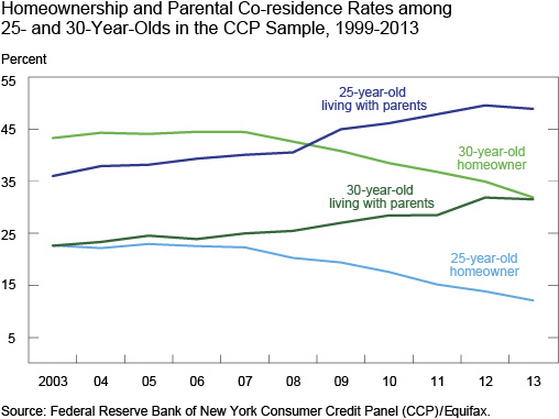 Speech of the week: Proposals to increase oversight of the Federal Reserve are “misguided”

“I think these proposals are misguided for three reasons. First, they are motivated by the belief that the Fed’s response during the crisis was both ineffective and outside the bounds of its traditional role and responsibilities. In fact, the Fed’s actions were effective, necessary, appropriate, and very much in keeping with the traditional role of the Fed and other central banks. Second, these proposals are based on the assertion that the Federal Reserve operates in secrecy and was not accountable for its actions during the crisis, a perspective that is in violent conflict with the facts… Third, and most importantly, I believe these proposals fail to anticipate the significant costs and risks of subjecting monetary policy to political pressure and constraining the Fed’s ability to carry out its traditional role of providing liquidity in a crisis.” –Jerome H. Powell, Governor, Federal Reserve Board