Government multipliers were no higher than average during the Great Recession

Valerie A. Ramey of the University of California, San Diego and Sarah Zubairy of Texas A&M University find that government spending multipliers are generally unaffected by the level of economic slack, and that interest rates near zero have an empirically ambiguous effect on these multipliers. This suggests that government -spending multipliers were not necessarily higher than average during the Great Recession, contrary to what others have suggested.

Vito Tanzi, formerly the head of the International Monetary Fund’s Fiscal Affairs Division, argues that lower tax rates on high incomes have been a primary contributor to rising income inequality in the United States.  Tanzi is skeptical that higher earners “deserve” their higher incomes because of their contributions to the economy, and doubts individuals respond in a “robot-like fashion” to monetary incentives.

In a comparison of cancer-related imaging between Veterans Affairs patients and Medicare patients, a group of researchers led by Harvard Medical School’s J. Michael Mcwilliams concludes that [geographic variation may not be a particularly good indicator of the extent of overuse in the healthcare system].  They find that the use of imaging was significantly lower for Veterans Affairs patients, but that the lower use was not associated with less geographic variation.

Chart of the week: Major entitlements accounted for nearly half of the federal budget in 2013 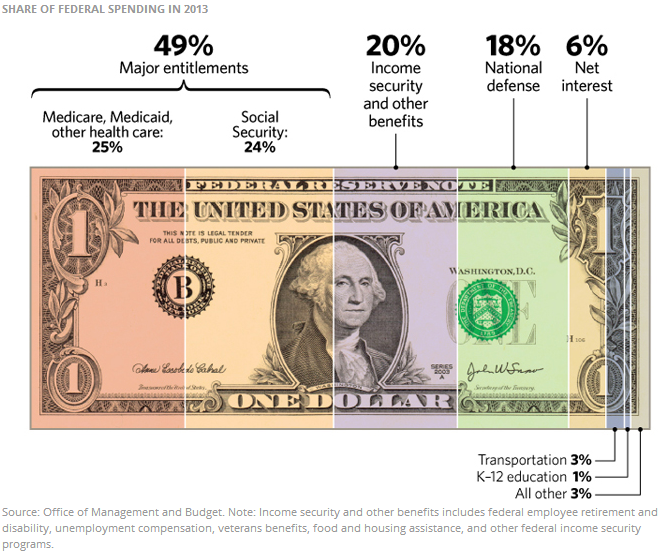 Speech of the week: To avoid financial instability, the Federal Reserve may turn to higher interest rates more readily than other central banks

“If, in the future, the United States did face… financial imbalances… growing rapidly against a backdrop of subpar economic conditions, the Federal Reserve may consider monetary policy for financial stability purposes more readily than some foreign peers because our regulatory perimeter is narrower, the capital markets are more important, and the macroprudential toolkit is not as extensive.”