Tight-fisted policy by local, state, and federal governments significantly dampened economic growth over most of the past four years, but that source of restraint finally appears to be over, the latest reading on the Hutchins Center Fiscal Impact Measure shows.

State and local spending fell sharply in 2010, subtracting about half a percentage point from GDP growth, a significant force in an economy growing at a 2.25 percent annual rate.  Spending continued to edge down through the end of 2012. Although spending finally started to pick up over the past year and a half, the pace has been lackluster, as is evident in both state and local government hiring and investment spending. 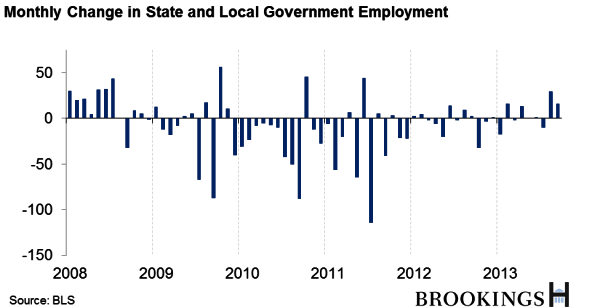 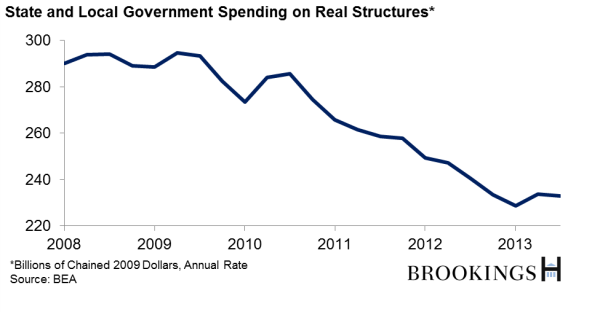 Federal spending also was on a downward trajectory, reflecting the withdrawal of fiscal stimulus spending, tight caps on discretionary spending, and the across-the-board spending cuts now known as sequestration.  These reduced GDP growth by an average of ⅓ percentage point per year from 2011 to 2013.  Spending leveled out in the first half of 2014, and rose sharply in the third quarter.  But the third-quarter spending surge reported recently reflected an outsized increase in defense spending (16 percent!) that will likely be reversed next quarter.  Federal spending will probably be about flat over 2014 as a whole.

Finally, net taxes—taxes less transfers for benefit programs such as Social Security —have increased in recent years, further restraining economic activity.  This increase is partly an automatic response to the economic recovery: tax rates tend to rise as incomes rise and transfers tend to decline when the economy is expanding as, for instance, fewer people claim unemployment benefits.  Discretionary policy decisions like the termination of extended unemployment insurance benefits and the payroll tax cut, and the enactment of tax increases on higher-income households also played a role.  With most of these now behind us, taxes and transfers are likely to be only a small restraining factor on GDP growth in coming quarters.

Taken together, our estimates suggest that fiscal policy at all levels of government lowered real GDP growth by almost 1 percentage point, on average, over 2011 to 2013, but is likely to be a roughly neutral factor going forward. The fiscal headwinds appear to have subsided.