On the first day of the federal fiscal year, the Hutchins Center on Fiscal and Monetary Policy at Brookings unveiled our Fiscal Impact Measure, a gauge of the contributions that federal, state and local governments make to the near-term pace of economic growth.

The FIM, as we’re calling it, is included in the new Fiscal Barometer on the Hutchins web site that tracks trends in federal, state and local spending, revenues and employment. The new measure and the other charts on the site will be updated regularly. It’s part of our effort to help the interested public keep tabs on government economic policy and to inject facts into the public debate. The data also highlight the important role of state and local government policies, sometimes overlooked in the Washington debate over federal taxes and spending.

The FIM is at the heart of this project. Constructed by Louise Sheiner, a Brookings senior fellow and policy director for the Hutchins Center, the measure summarizes all the ways in which spending and taxes at all levels of government are influencing the current pace of economic growth.

A glance at the chart shows the significant impact of President Obama’s American Reinvestment and Recovery Act in boosting the economy during the Great Recession, and how subsequent spending cuts and tax increases at the federal, state and local government have restrained the economy in the past few years. (Read about the construction of the FIM). The measure is similar to one that Federal Reserve staff economists calculate for internal use of Fed policymakers. One big difference is that our measure is publicly available.

The new Hutchins Center’s Fiscal Barometer also tracks recent trends in government employment, spending and taxes at all levels of government, and monitors longer-run projections of federal revenues, outlays, deficits and debt. If you look at the individual charts, for instance, you can see the declines in state and local government employment during the recession as well as the sharp drop in state and local infrastructure spending in the past few years. 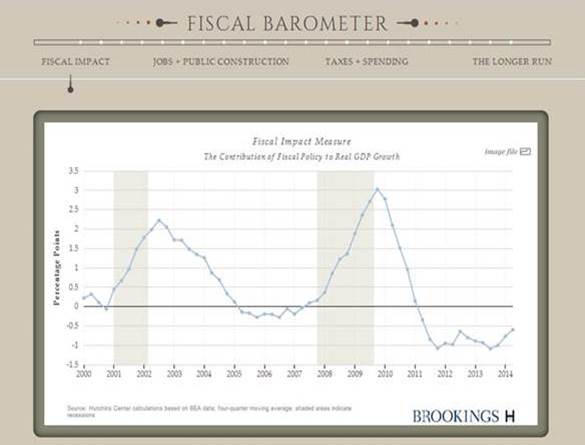