Financial Results: To date, the two programs have generated savings of $817 million—$372 million of which has been saved by Medicare and another $445 that has been returned to the ACOs through shared savings. While these savings are not final calculations, they suggest that both programs have produced modest savings in the first two years with some variability across ACOs.

Pioneer ACOs: Pioneers, generally considered more advanced ACOs, were able to generate more total program savings in year two than in year one ($96 million vs. $87 million), while also qualifying for shared savings payments of $68 million. The Medicare Trust Fund saved approximately $41 million in year two of the Pioneer program. In total, Pioneer ACOs were able to achieve an approximately 1% lower spending trend overall for the Medicare population than fee-for-service (1.4 vs. 0.45 percent lower per capita growth). Seventeen of the 23 Pioneer ACOs had positive or neutral financial performance, eleven of which were able to slow health spending enough to share in savings. On average, those ACOs saved $4.2 million in 2013, up from $2.7 million in 2012; shared savings grew from $1.2 million to $13 million. Six Pioneers generated losses, three of which were significant enough to require those Pioneer ACOs to share in the losses. While remaining Pioneers have been able to attain bigger savings in year two of the program, almost a third of original participants have left the program—some have moved to the lower risk MSSP, while others have focused on commercial ACO contracts or higher levels of risk in MA programs.

MSSP ACOs: MSSP ACOs were likewise able to reduce overall cost trend by slightly less than 1 percent. Of the 220 MSSP ACOs that started in 2012 or 2013, roughly one-quarter (53) were able to reduce spending enough to qualify for total shared savings of over $300 million. An additional 52 ACOs reduced spending compared to their benchmarks, but not enough to qualify for shared savings. One ACO that opted for track two (two-sided financial risk) overspent its benchmark by $10 million and owed shared savings of $4 million. MSSP ACOs as a whole were able to reduce spending by $652 million below their financial benchmarks and saved the Medicare Trust Fund $345 million, including repayment for the track 2 ACO losses. 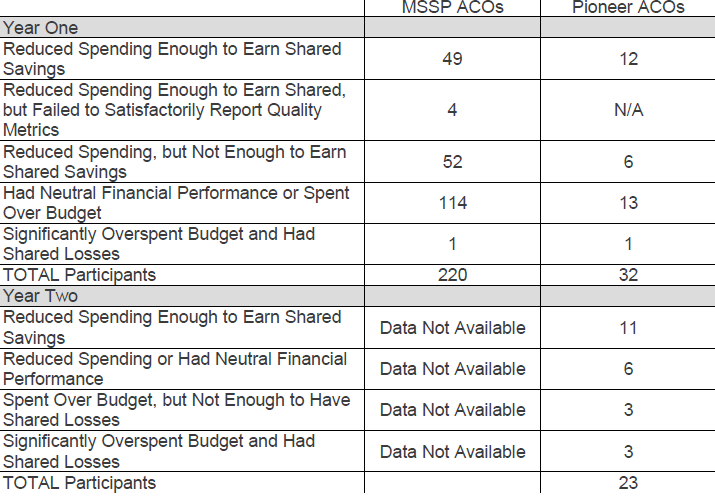 Quality Results
Medicare ACOs continue to improve significantly on overall quality scores.  Both Pioneer ACOs and MSSPs have been able to attain higher average performance than quality benchmarks and better performance than Medicare fee-for-service on measures with data, such as colorectal screening, tobacco cessation, and depression screening.

MSSP ACOs: MSSP ACOs, as a group, posted even more improvement in quality scores than the Pioneer ACOs. MSSP ACOs starting in 2012 and 2013 were able to improve 30 of 33 quality measures, including measures such as patients’ rating of clinicians’ communication, beneficiaries rating of doctors, health promotion and education, screening for tobacco use and cessation, and screening for high blood pressure. In total, MSSP ACOs are experiencing higher CAHPS patient experience survey scores than Medicare fee-for-service, suggesting that patients are engaged and satisfied with being a part of an ACO. Additionally, MSSP ACOs achieved higher average performance rates on 17 of 22 Group Practice Reporting Option (GPRO) Web Interface measures reported by other large physician group fee-for-service providers.  Over 125,000 eligible providers or supplier members of ACOs qualified for incentive payments through PQRS (Physician Quality Reporting System) in 2013. Unfortunately, nine MSSP ACOs failed to successfully report their quality scores, four of which would have otherwise qualified for shared savings.

Digging Deeper into the Results
While program level analysis of financial performance is meaningful, a deeper analysis of the data and organizational characteristics of those MSSP ACOs that earned shared savings reveals some interesting trends. A little over half of those earning shared savings were physician-led ACOs (26/49) and more than a third of these physician led ACOs operate in Florida (10/26). The continued success of physician-led ACOs is consistent with previous findings that these ACOs may be better positioned than institutionally-based ACO to reduce overall costs. In addition, analysis by The Center for Medicare and Medicaid Innovation (CMMI) found that there is no relationship between savings/loss performances and whether the ACO included a hospital. Hospital-led ACOs were overall less likely to share in savings than physician-led ACOs. These two findings together suggest that ACOs can experience success even without an official hospital affiliation, paving the way for more physician practices to join and excel at accountable care.

Interesting regional trends are beginning to emerge from the data. Florida and Texas had the highest concentration of ACOs sharing in savings. Of the 30 Florida-based MSSP ACOs, more than a third (11) were able to share in savings, while almost half (7/15) Texas-based MSSP ACOs qualified for shared savings. Furthermore, the top two earning MSSP ACOs were from Texas (Memorial Herman with $28.34 million) and Florida (Palm Beach ACO with $19.34 million), respectively. The concentration of shared savings in these two states raises important questions about what is driving the high level performance. Are these MSSPs more likely to succeed because of a higher financial benchmark based on disproportionately greater regional Medicare spending? Do these ACOs have a leg up from the start because of their patient population and historical spending trend? Are physician ACOs more likely to form and succeed in these higher-cost areas? The success of these programs should not be understated, but further analysis may be needed to better understand performance drivers so appropriate program adjustments may be considered to level the playing field among MSSP ACOs across all regions.

Next Steps
While these latest Medicare ACO results are encouraging, more work needs to be done. The Pioneer Program recently lost its tenth program participant, Sharp Healthcare, bringing the total number of Pioneers down to 22. Like some other Pioneers that have exited the program, Sharp was dissatisfied with the benchmark and payment methodology and was no longer willing to assume financial risk that they felt was too great. This is just one among many policy and implementation issues with which Medicare ACOs are struggling. In June, we published a set of recommendations to ensure the long-term sustainability of the Medicare ACO program by addressing eight major ACO challenges. These results seem to reinforce the need for several of these recommendations for change in the Medicare ACO Program.

CMMI, which administers the Pioneer ACO Program, has recognized some of these challenges and has begun giving ACOs some greater flexibility in operating within the program. These changes include allowing them to move to population-based payments, waiving the 3-day hospitalization rule to allow ACOs to directly admit qualified patients to skilled nursing facilities, and experimenting with “voluntary alignment” to allow beneficiaries to attest to a primary care physician to offset some of the limitations of the existing attribution process. These are moves in the right direction; however CMS must continue to engage providers across the country to make sure the program remains viable.

Meanwhile, the MSSP will add another round of participants in January 2015 and CMS is expected to release a notice of proposed rulemaking that will amend the current operating requirements for the MSSP program later this year. The scope and nature of changes could dramatically impact the interest of new organization, as well as the continued participation of current MSSP and Pioneer ACOs.  Medicare ACOs will likely be encouraged to continue innovating to improve quality and reduce costs in the Medicare program, but the Medicare ACO program must continue to evolve to meet provider and beneficiary needs to ensure continued success.

Note: This blog has been corrected since its original posting on September 22 to reflect more accurate data.

The debate on overpayment in Medicare Advantage: Pulling it together