What’s happening in fiscal and monetary policy right now? The Hutchins Roundup is a new feature from the Hutchins Center on Fiscal and Monetary Policy to help keep you informed on the latest research, charts, and speeches. Sign up to have the Hutchins Roundup delivered to your inbox, or email us with your suggestions for items to include in the next Roundup.

Monetary policy has oomph even at zero lower bound

Even though short-term interest rates hit the zero lower bound, Eric Swanson of the University of California at Irvine and John C. William of the Federal Reserve Bank of San Francisco find that yields on Treasury securities with a year or more to maturity were surprisingly responsive to macroeconomic news through 2010. Only beginning in late 2011—around the time the Fed promised to hold short-term rates near zero until “mid-2013”—did yields on these intermediate-maturity Treasuries turn impervious to news. This, they say, suggests the efficacy of monetary and fiscal policy was likely close to normal in 2008–10.

A new model for capital regulation

In this International Monetary Fund working paper, Connel Fullenkamp of Duke University and Céline Rochon of the IMF propose a new system of capital regulation that:

Kevin Milligan of the University of British Columbia and Michael Smart of the University of Toronto estimate the effect of tax rates on reported income for high earners in Canada.  Using cross-provincial variation in tax rates, they find that, for those in the top 1%, reported income increases sharply when tax rates fall but the responsiveness is much lower for other high earners. They note that the long-run trend of higher income concentration in Canada is largely unrelated to changes in taxes.

Chart of the week: Official poverty rate falls for the first time since 2006 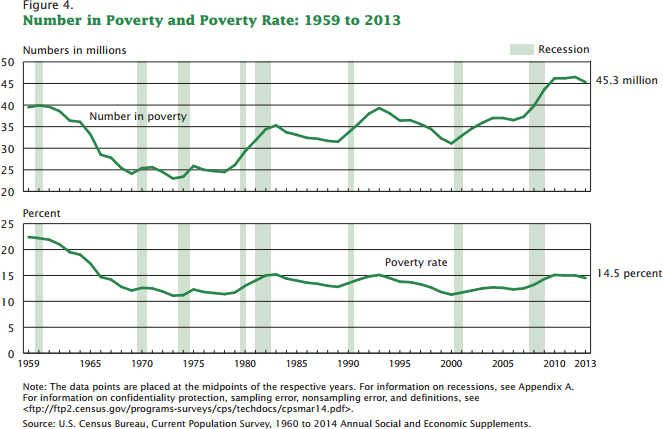 Speech of the week: Central banks are responsible for reaching inflation goals

“If one is talking about the perspectives of growth it is true that monetary policy cannot do it alone. It’s mostly up to governments, especially structural reforms. But if one is talking about inflation it is different: It is the responsibility of monetary policy to reach the inflation goal – that is the fundamental creed of monetary theory and of central banks. We cannot shift this responsibility to others, but if others can help, it is even better.” – Vítor Constâncio, vice-president , European Central Bank